“Magna Force” is basically Jenga with magnets. The goal of the game is to remove as many pillars as possible before the tower topples over. The game begins with the set up, where the first player to roll a blue on the color dice gets to place the first pillar wherever they want. Players continue placing pillars in a clockwise manner until at least four are placed. The next player gets a choice between adding another pillar or putting in a transparent disc which adds another level to the game. Every time there are four or more pillars in the current layer, the player has the choice of adding a pillar or transparent disc to make a new level. Set up continues until all 30 pillars are placed and the tower is five or six levels high. 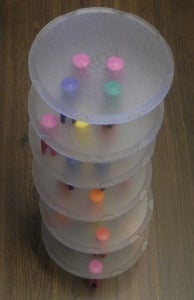 An example of a finished tower after the set up is done. Players will have to try to grab the pillars corresponding to the colors they roll without making the tower topple over.

Game play is very simple. The player simply throws the color dice to determine which color pillar they will have to try to get and attempts to remove one from the tower with their magnetic wand. If they are successful, they get to keep that pillar and play continues clockwise in the same manner. When a player makes the tower topple over, the game ends. The player who made the tower collapse gets 0 points while the other players count up their pillars, which are worth different amounts of points based on their color (yellow = 1, green = 2, orange = 3, pink = 4, red = 5, blue = 6). The player with the most points wins. 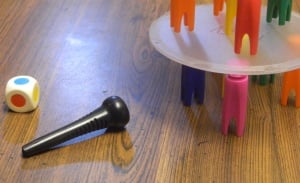 In this case, the player has rolled blue and must remove a blue pillar from the tower with the black magnetic wand. I do not recommend going for a low pillar like this player is doing.

There are a couple additional rules that probably won’t come into play (since it’s hard to get more than 7 or 8 pillars off without having it topple anyway). First of all, if a player rolls a color and no pillars of that color are still in the tower they simply lose their turn. Also, you can pass on a move (if you don’t think you can remove the color you are tasked with without making the tower topple over). However, you must return a pillar to the tower (the one with the highest point value) so I doubt anyone would ever use this rule.

The game suggests some variant rules, one of which I actually suggest using (even though it is supposedly for “younger players”). I suggest using the rule stating that one of the transparent discs should be used as a base and more pillars should be placed on fewer levels. This is almost a necessity because the tower is usually extremely unsteady and it is hard to get more than two or three pillars per player before the tower topples over. The game also suggests a “joker” rule where each player picks a color and if they roll their selected color, they can elect to go for a second pillar of the same color. In this case, color values are ignored and the quantity of pillars determines the winner.

I really thought “Magna Force” would be a fun game. “Jenga” with magnets sounds like a neat concept, after all. Unfortunately, there isn’t much of a game here. When it often takes longer to set up a game than actually play it, there is a problem. That is the case with “Magna Force.” The set up system is really annoying and quite lengthy, in fact we just started to ignore it after our first game and just placed pillars randomly. It’s not like the game takes forever to set up but when an average game lasts a couple minutes and set up is just as long, that is way too much time to spend setting something up.

The worst part of the game is that it’s almost impossible to remove more than two or three pillars per player before the tower collapses. “Jenga” is pretty boring and easy to play (you just search for a loose piece and grab it) but at least the game lasts more than two minutes. I didn’t try the game using the variant rule about using a transparent disc as a base (I didn’t notice it until I sat down to write this review) but I’m guessing it would help a bit (without it it’s impossible to even take pillars off the lowest level).

I think the main reason it’s so hard to remove a lot of pillars is that it’s hard to set up a steady tower. Unlike “Jenga” and similar games, there really aren’t any guidelines to help build the tower which means that it almost certainly will be built poorly (and in a way that makes it easy to topple over). The discs might get placed slightly off-center of each other, one side of the tower will likely have more weight to it, or any of a number of other things could make it unsteady. Also, when you drag a pillar out of the tower with the magnet, things tend to move slightly making the tower even easier to topple over.

I don’t really blame the equipment for these problems though. The pillars and discs are pretty high quality and the magnets are extremely strong. I never had a problem grabbing a pillar with the magnet throughout the several games I played.

I’m not a fan of some of the game play decisions “Magna Force” made. First of all, I don’t like the idea of making different colors worth more or less than the others. It adds even more luck to the game (you need to roll well to win), which already has an often wobbly tower that could fall down at any time (the player before you could set up the tower to almost assuredly fall during your turn by accidentally making it off-balance). It’s not like the different color pillars are even different in size or shape (or more difficult to get than the other ones) so if you roll well you will almost certainly win. If the game would have made the more valuable colors thicker (or otherwise harder to get) or had them placed by rule on the bottom of the tower, this rule might have been okay. However, since there is no difference between the colors except for their point value, this is a terrible rule.

As mentioned earlier, a game of “Magna Force” takes approximately two minutes to play. That is way too fast. However, you could just decide to play a set amount of games and total up the amount of pillars each player got throughout all the games (basically just turning a “game” into a “round”) to determine the winner.

I had high hopes for “Magna Force” but it just isn’t a good game at all. From a set up time that rivals an average game’s length to a terrible color point value rule, there isn’t really much positive I can say about the game. Good luck setting up a sturdy enough tower to get a good game going. This is a game with a good concept that just ultimately doesn’t work on any level.