The object of the game is to be the first player to form a path of pipes of the appropriate length from the faucet card to the spout card.

On a player’s turn they take one action and then draw a new card from the draw pile. For their action a player can chose one of four options:

When playing cards, the cards must all face vertically. Cards can be flipped so either side points upwards but no cards can be played horizontally. 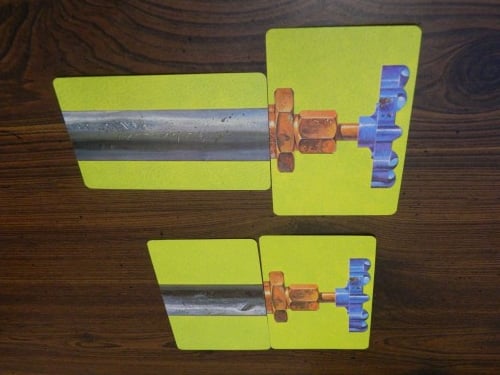 The top card is played properly while the bottom pipe is played incorrectly.

Cards can only be played if they properly attach to pipes already played in a player’s set of pipes. When playing pipes the player needs to leave at least one path where additional pipes can be played. 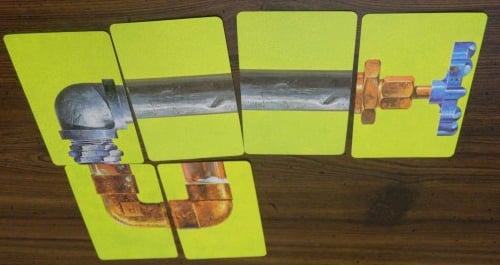 The last curved pipe in this set of pipes can’t be played since it would prevent any future pipe cards from being played.

Non-leaky pipes may not be played on another player’s set of pipes.

If a player wants to play a leaky pipe on an opponent’s set of pipes they can either play it on the opponent’s last card played or adjacent to the last pipe card played. A player can only play a pipe on top of another pipe if the pipe that is being replaced is a lead pipe and the pipe shape is the same shape as the leaky pipe card. If a leaky pipe card was already played on the pipe and was repaired, the same piece of pipe cannot be made leaky again. If the player adds a leaky pipe to the end of the player’s set of pipes the card can be any shape as long as it allows the player to have at least one path available to add pipes in future turns. 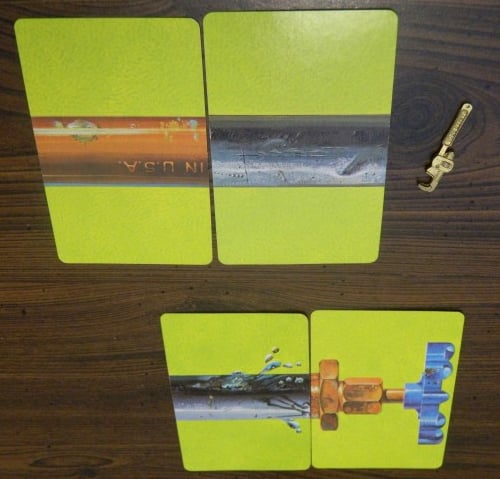 Two special types of cards in Waterworks are the “T pipes” and the “caps”. “T pipes” allow a player to branch their pipe in two different directions. The player can build their path out of either end of the pipe but the water can’t flow through both ends so one end has to eventually be capped in order to win the game. A player uses a cap card in order to cap one of the paths. Since other players can play a leaky cap on either of the two paths, it is best to cap one path as soon as possible since other players won’t be able to cap the other end. Any cards played after a “T pipe” that lead to a cap/dead end are not counted in the final total of pipe cards. Leaky caps are fixed in the same ways as other leaky pipes. 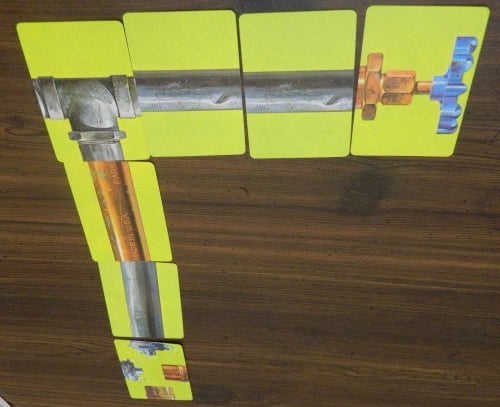 This player waited to cap one end of their “T pipe”. Another player then played a leaky cap at the end of pipes heading up. These pipes are now wasted since the player can’t build off them anymore and the two pipes going up won’t count towards the number of pipes played for the player.

In order to win the game, a player has to create a line of uninterrupted pipes that equals or exceeds the number of pipes required based on the number of players. 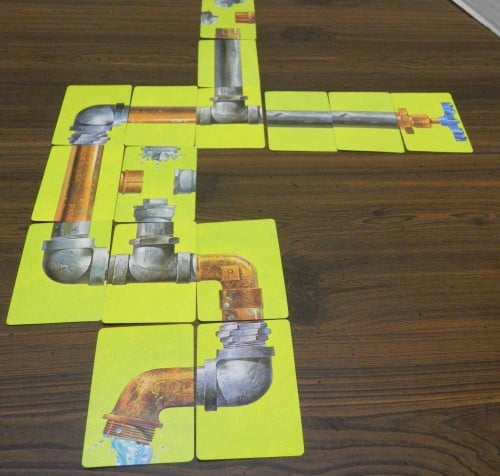 In a four player game this would be a winning set of pipes. There is a line of 10 pipes that lead to a spout that points downwards.

Waterworks is a 1972 card game that simulates the exciting world of plumbing. Players create their own plumbing system as they try to connect their faucet with a spout. Players can sabotage each other though by creating leaks in pipes. While the game has too much “take that” and relies too much on luck, Waterworks is the definition of a very average Parker Brothers game.

Despite using cards, Waterworks is your typical tile laying game. Basically each player plays cards to form a path of pipes that properly connect to one another. Waterworks kind of plays like dominoes or a much more simplified Carcassonne

. If you have ever played a tile laying game before you probably know what to expect out of Waterworks. Waterworks is an easy game to pick up and play but is kind of lacking in strategy at time. The simplicity might make Waterworks appeal more to people who don’t play a lot of board/card games.

While the game relies pretty heavily on luck (more on this later), Waterworks does have some strategy. As you are building your set of pipes you need to keep in mind that you will eventually need to connect your pipes to the spout. Since the spout can only be positioned one way, you need to make sure that you can easily add the spout on the end after you have reached the necessary number of cards. Each turn is crucial since the game ends with all of the players being very close to one another. When you are a couple pipes away from winning the game you need to either have your last pipe pointing left, up or down so it is easy to turn the pipe in a direction to add on the spout. If your pipes are pointing right you will have to waste turns just turning your set of pipes in the right direction. You can use this to mess with the other players. If a player is close to winning the game another player can mess with the player quite a bit by redirecting their pipe to face right which means that they will have to play several cards in order to redirect the pipes back in the right direction.

While the ultimate goal is to build your own set of pipes, Waterworks has a lot of “take that” that goes on in the game. You need to mostly focus on building up your own pipes but you will likely have to mess with the other players in order to avoid falling behind. Sometimes you don’t really even have a choice if your hand is filled with leaky pipe cards. If possible you are better off focusing on your own set of pipes though since you are wasting turns messing with the other players. At times though you have to sabotage the other players. If a player gets out to a lead the other players have to gang up on that player in order to catch up. If a player ends up avoiding getting sabotaged much by the other players they have a great chance at winning the game. While I don’t mind some “take that”, this element has too big of impact on the game in my opinion.

One thing that I think could have helped with this reliance on card draw would have been to increase a player’s hand size. With larger hands players would have more options which would let more skill/strategy impact the game and made the reliance on drawing the right cards at the right times a little less important.

While this is not really a complaint I have to point out that Waterworks is one of those types of games that require a lot more space than you would expect to play. Being a simple card game you wouldn’t think that you would need that much room but you do. If you are playing with more than two players you are going to need at least a kitchen table to fit all of the cards and then you still might has some space issues in four and five player games. The reason you need so much space is that each player has their own set of cards and as each player adds more cards to their set of pipes, their board starts to expand. With several players each player’s board starts to run into one another. If you don’t have a large table or multiple tables to use you might have to consider playing the game on the floor.

Waterworks is simply a very average tile laying game. You can have fun with the game and it is easy to play. The game relies too much on luck though and the game doesn’t really do anything unique that makes it stand out over other tile laying games. You could do a lot better but also a lot worse than Waterworks.

If you have fond memories of Waterworks or really like tile laying games, you should enjoy Waterworks. Otherwise I would probably only recommend picking up the game if you find it for cheap at a garage sale or thrift store.

Sorry for that I am just trying to get the younger ones to bed. I do have to say, you did a tremendous job on the work you put into this. This is such an old game that it is hard to explain the oldies. :) With a family of 12 I am really surprised that we still have 9 wrenches left in the box! I will create a new version of this game because my younger siblings are too young to sass me around about the instructions because we lost those too! That is why I am looking at this. It was pretty helpful and it shows all your hard work, so thank you. Also, I am very sorry about what I said about sassing you. Again , thank you Riley

Good catch. As most games have you placing cards/tiles from left to right, when I took the pictures I just assumed the same was true for Waterworks. Waterworks actually has you starting from the right and placing cards to the left which means that all of my pictures are backwards. Other than being upside down, the images should be accurate.

The nice thing I remember most about Waterworks was the high quality detail of the illustrations on the cards, and the little metal wrench playing pieces. It was fun to me as a kid to look at all the little dents and markings on the different pipes.