The Spy Detector Game is played in rounds with players scoring points at the end of each round.

Randomly choose one of the guilty cards and set the other guilty cards aside without looking at them. Place the chosen guilty card into the back of the lie detector machine with the yellow side of the card facing the back of the machine. Give each player an accuse card. Shuffle the hot tip cards and deal two to each player which they keep in their hand. Shuffle all of the witness cards and deal them out evenly among all of the players. Players place their witness cards face up so all of the other players can see them. Each player places their scoring peg on the starting space of the score board.

On a player’s turn they can do one of two things: question one witness or use one hot tip card.

To question a witness the player picks one of the witness cards that they would like to question. Each witness tells you about one of the characteristics of the spy like if the spy is thin, bald, etc. Players can question any of their own witnesses but can only question two witnesses from the other players during a round. The chosen witness card is turned so the white side of the card is facing up and put into the corresponding space on the spy detector. The reset knob is turned to the left and the probe is placed into the hole in the card. The spy detector indicates whether the witness is telling the truth or lying. 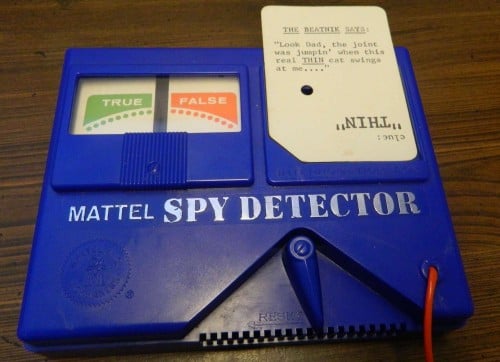 The beatnik is being questioned about whether the spy is thin. 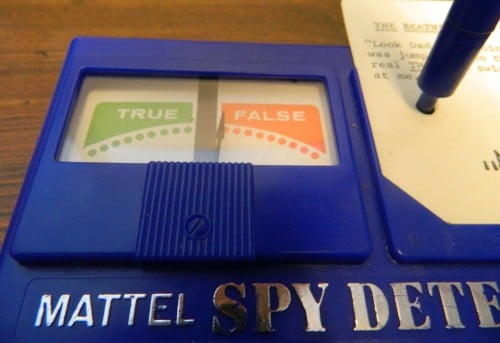 The Beatnik card is tested and it is determined that the spy is not thin.

All of the players then look at their face up witness cards and turns any witness card that has been shown to not be the spy based on the witness’ statement face down indicating that they aren’t the spy. These cards stay face down for the rest of the game unless it is determined to have been turned over incorrectly. 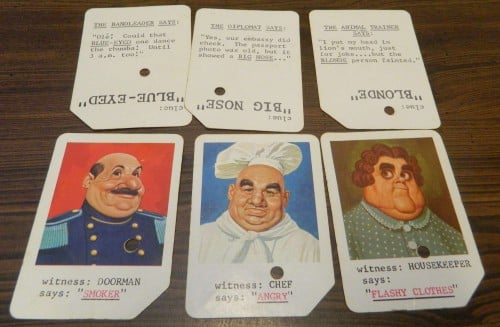 Since the spy is not thin this player has turned over the bandleader, diplomat and animal trainer cards.

Hot tips are used in mostly the same way as witness cards except that their information is only known by the player that owns the card. If a player wants to use a hot tip card they put it into the machine without letting the other players know what information is on the card. They then test the card the same as they would a witness. This player then has to turn their own witness cards over that have been proven not to be the spy by the information gained. 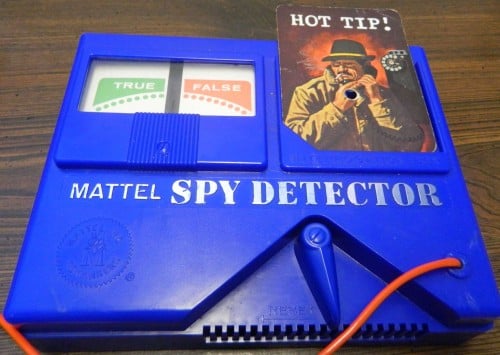 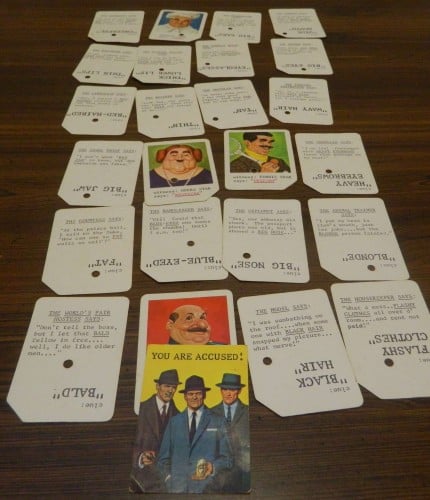 This player is accusing the doorman of being the spy.

The player then takes the spy detector and with the front of the machine facing them, they pull up the guilty card. If they guess correctly they show the card to the other players and they win the round. If they are wrong, they put the card back into the machine and they are out for the round. The player distributes their witness cards equally to all of the other players. If all of the players guess wrong the round ends with no players winning the game. In this situation the last player has to immediately accuse a witness after the previous player was incorrect.

The player thought the spy was the doorman and they were correct so they win the current round.

If no one has won the game, a new round begins with the winner of the previous round starting the next round. Each player is dealt new hot tip and witness cards and the guilty card in the back of the lie detector is changed.

When a player wins a round they score five points and score one additional point for every face up witness card in front of the other players. Players who are incorrect lose two points. Players record their score on the scoreboard by moving their peg up and down. The first player to reach the Top Secret Agent space on the scoreboard wins the game. 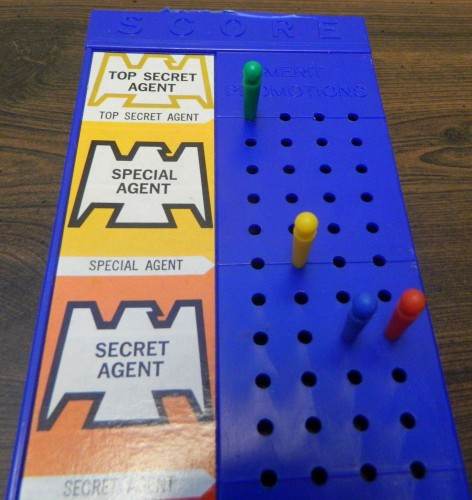 The green player has reached the level of Top Secret Agent and has won the game.

The secret rocket fuel formula is missing. Who could have stolen it? We must have a spy among our ranks. Is it the chef, the doorman or that guilty looking jewel thief in the corner? You as a junior secret agent must question the witnesses in order to figure out which one is the spy that stole the rocket fuel formula. Will you be able to catch the spy before they get away with the formula?

While I wasn’t alive in the 1960’s, this game is so reminiscent of a bygone era. Just look at the box and you can tell that the game is from the 1960’s. The art style is so reminiscent of the era. Some of the characters look quite strange though. Like a lot of other games from this time period the game also features a lot of smoking since smoking is one of the clues used in the game.

Being a game from the 1960’s I wasn’t expecting a lot from Spy Detector. A lot of older board games haven’t fared that well and have aged pretty poorly since newer board games have found better ways to utilize mechanics used in older games. Despite being over 50 years old I have to give Spy Detector a lot of credit for being quite innovative for it’s time.

I would say that Spy Detector/Lie Detector is the predecessor to the game Guess Who. You are eliminating suspects using visual characteristics just like you do in the game Guess Who. Instead of asking the other player yes and no questions though you use the spy detector and cards in order to ask questions to figure out who the spy is. The spy detector is the coolest part of the game. The game doesn’t use batteries so the game should last and not break like a lot of electronic games.The spy detector uses springs and holes in the cards in order to determine if a statement is true or false. I think this is a clever idea.

While the game has some issues which I will get to shortly, I actually thought that Spy Detector was kind of fun. While it is worse in some ways, I actually think Spy Detector may be better than Guess Who that was made decades later. The game supports more than two players which Guess Who does not. Using the spy detector is also a lot more fun than just flipping down pictures.

Spy Detector/Lie Detector’s biggest issue though is the simple fact that some of the characteristics in the game are just not that clear. What I mean is that it is sometimes hard to figure out what characteristics apply to each witness. For example one of the clues is that the spy is cheerful. While this is obvious for some of the people there are plenty of people that aren’t cheerful but aren’t sad either. So are these characters cheerful or not cheerful?

This is far from the only questionable characteristic. The game also includes the characteristics: flashy clothes, blue eyed, fat/thin, uniform, big eyes, big ears, wide mouth, thick lower lip, thin lips, wavy hair, tan, heavy eyebrows, and wavy-haired. While these might seem helpful, the problem is that there isn’t a distinct difference in a lot of these characteristics between people they apply to and people that they don’t apply to. The eye color might be the worst since for most of the characters you can’t even see the characters eye color so I don’t know how you can tell if the person has blue eyes.

I am guessing the game did this to make the game a little more subjective. The witnesses wouldn’t given you perfect information when you question them so this simulates that potential. The problem with this though is that it is easy to misinterpret the clues which could ruin a round. A player could easily flip over a witness that they thought a clue didn’t apply to which turns out to be the actual spy. In the three rounds that I played, one of the rounds was ruined because a player misinterpreted the clue of flashy clothes. Each round is pretty short but it still sucks when a round ends with no one being right because a clue was misinterpreted. The game really needed to include a chart that showed which clues were true and false for each character. This would have allowed people to figure out what the game intended and not mess up a round by having a player flip over a card that shouldn’t have been.

Turn order becomes huge in the game since once you get down to only a few suspects, the players who play next have an advantage. Any witness you question will just give your opponents more information and help them win the game. If you are going to question a witness you want a question that will only eliminate a couple suspects. Once there are only a couple suspects left you are probably better off just making a guess since someone will probably guess the correct answer before you get another turn.

Overall the components for Spy Detector are good and bad at the same time. I have already talked about how I think the spy detector is a really cool idea. Despite the game being over 50 years old the spy detector that came with my game still works really well. The artwork is also nice. The problem with the components is that the cards are going to have a lot of wear with extended use. With how the game is played the cards can get worn out pretty quickly. If players press too hard with the spy detector it is not that hard to puncture holes into the guilty cards. It is going to be pretty hard to find a copy of the game that doesn’t have a lot of wear.

While it is not a fantastic game, you have to give Spy Detector quite a bit of credit for being an innovative game for the 1960s. The game is a lot like Guess Who which supports more than two players and has an interesting mechanic utilizing the spy detector. The game is really easy and quick to play, and is pretty fun. Two problems keep Spy Detector from being a good/great. First it is too hard to determine which suspects the different characteristics apply to. The skill in the game is also kind of limited since all of the players have pretty much the same information. Despite these problems the game is still pretty decent for its age.

The Omega Virus Board Game Review and Rules
Click here to cancel reply.

A friend had Spy Detector when we were in elementary school. I absolutely loved it! I could play it over and over again. Such fond memories.