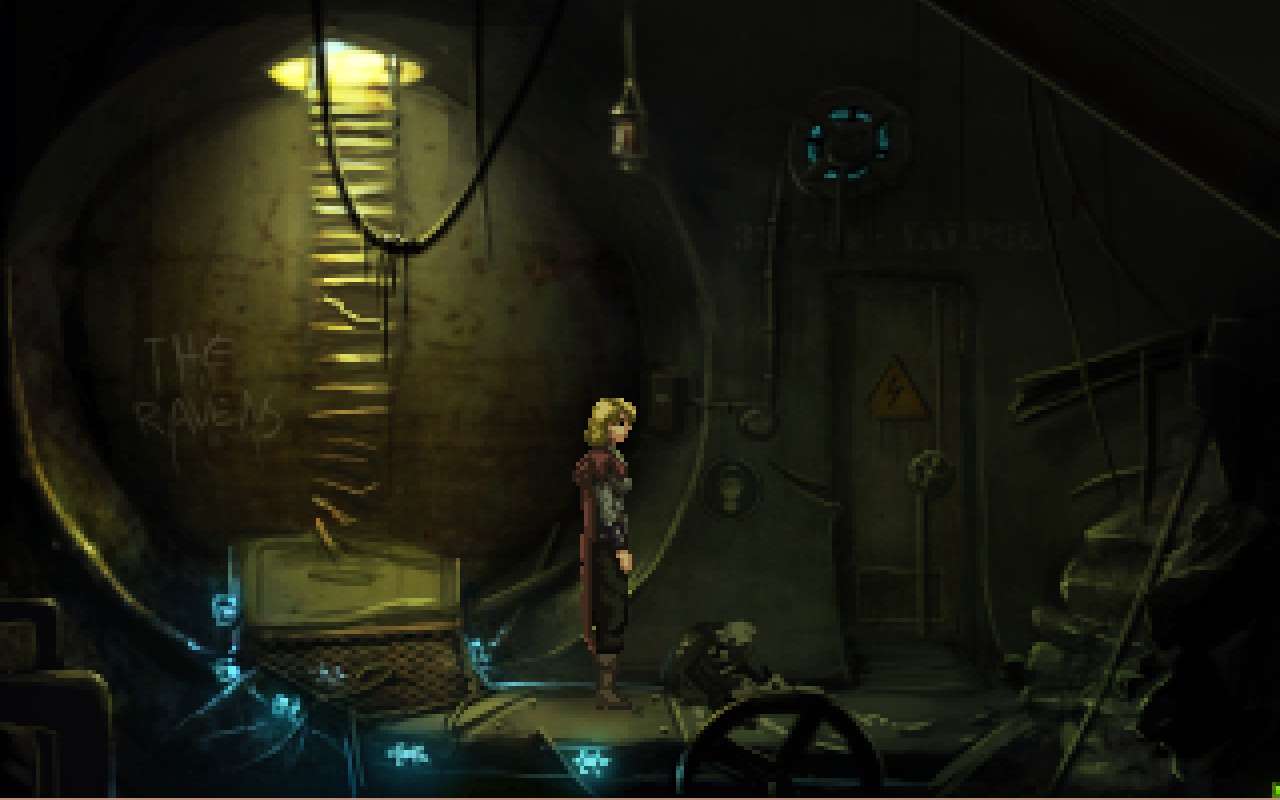 Over twenty years ago the world as we know it ended. When the bombs dropped the world changed forever. Since that day the world has suffered through disease and hunger as people just try to survive. If that wasn’t bad enough a dangerous disease called Green Lung ravages the population. There is no cure for Green Lung and the only way to prevent death after contracting the disease is to be regularly vaccinated. Unfortunately the rich Aristocrats have control over all of the vaccines and force non-members to do dangerous jobs just to enter a lottery to have a chance of receiving the vaccine.

In Shardlight you play as Amy Wellard who has contracted Green Lung and needs to work some of these dangerous jobs in order to have a chance at receiving a vaccine. Her latest job leads her down a dangerous path as she learns things aren’t as they seem. Can Amy find a cure to Green Lung to save her own life along with everyone else’s?

Shardlight is your typical point and click game. Gameplay involves walking around the environment and exploring in order to figure out how to proceed in the game. You need to solve puzzles and use items collected in order to push the story forward to its’ conclusion.

A recent trend in pop culture seems to be the post-apocalypse. I find the post-apocalypse to be an interesting backdrop for video games since it is different enough from our own world that it creates a unique environment but it still feels grounded in reality. Today I am looking at Shardlight which is a point and click game set in the post apocalypse.

Shardlight’s greatest strength is probably its’ story which is crucial for a point and click adventure game. The game does a good job creating an interesting setting that is engaging. The backstory is pretty interesting even though I wish the game would have addressed it a little more. The characters are interesting and the plot is engaging enough that you want to continue playing to see what happens. The entire game includes voice work which is always a positive over just having to read text boxes. For the most part the voice work is pretty good. The main character is well done while some of the supporting characters are a little hit or miss.

One of the biggest complaints people have with point and click games is that some of the puzzles in the games are so obtuse that they are really hard to solve. Usually you have to just click everywhere and try every item combination until you randomly figure out what the designers wanted you to do next. That is not the case in Shardlight. The puzzles and gameplay are really straightforward for the most part. There is only one point in the game where I had to resort to trying every object in every location and that is due to me forgetting that one of the items in the environment was a clickable object.

Since the game avoids frustrating puzzles, I had fun with Shardlight. I didn’t feel like I was wasting my time like you do in some point and click games where you have to just try everything until you find the right solution. For the most part I felt the game was about the right length. It isn’t too short or too long. If you like point and click games and are interested in the theme/plot I think you will enjoy Shardlight.

While the story is quite interesting and well done for the most part, I felt the story’s pace was a little off at times. At times the story seemed to move a little too quickly while other times it dragged a little. Most of the time the story seems to be paced right but there are these couple situations where the pacing could have been a little better. While the game has a satisfying ending it feels like more could have been done with the story. The game has an interesting backstory which could have been expanded on. I could see the game supporting a sequel/prequel since I think more could be done with the story.

As I mentioned earlier the game doesn’t have any frustrating points like most point and click games where you go around trying every combination until you find the solution the developers wanted you to find. The downside to this is that for the most part the game isn’t that challenging. The puzzles are usually quite easy especially in the later parts of the game where you breeze from one area to another. This is not necessarily a bad thing but if you want challenging puzzles you aren’t going to find them in Shardlight. If you don’t like frustratingly difficult puzzles though this might be a good thing.

Overall I would say that Shardlight is around 7-9 hours in length. It took me around 8 hours to beat the game. If you can avoid the one area where I got stuck due to forgetting about a clickable object, you might be able to finish the game in around 7 hours. If you get stuck on a couple more of the puzzles I would say that it will be closer to 9 hours in length. Being a story based game I don’t know if there is a lot of replay value in the game. Some people may want to replay the game but I don’t really see the point in replaying the game once you already know what you have to do in the game. Overall the game feels like the right length without being too long or too short.

Shardlight retails at $14.99. Since the game is around 7-9 hours long you are paying around $2 an hour of enjoyment which is not bad. If you like point and click games and you find the premise interesting, it is probably worth it for you. If you only occasionally enjoy point and click games you should maybe wait for a sale.

Shardlight is a pretty good point and click game. The story is interesting and compelling enough that you want to see how it ends. The gameplay is straightforward which is good since it avoids the situations where you don’t know what to do next. At the same time though the game is kind of on the easy side.