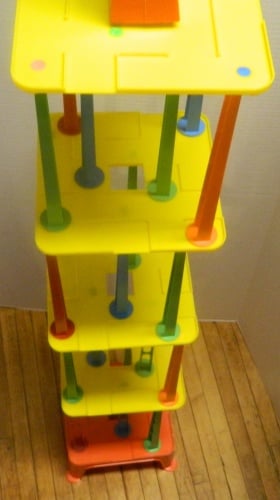 The picture above shows the tower fully assembled.

The game is played in rounds. The number of rounds is equal to the number of players. Each player gets to start one of the rounds.

A player’s turn begins with them spinning the spinner. The player needs to remove a pillar from the tower that matches the color they spun. If the player spins a color that has no pillars remaining, they continue to spin until they get a color that is still present in the tower.

While removing pillars from the tower a player needs to follow these rules:

If a player successfully removes the pillar without tipping over the tower, they get to keep that pillar which will be used for scoring at the end of the round. Play will then proceed to the next player.

Points are rewarded as follows:

When all of the rounds have been completed, whoever has the most points is the winner.

Most people are familiar with tower building games like Jenga. Today I am looking at a game that predates Jenga and is actually probably one of the older tower building games. Careful The Toppling Tower Game was created by Ideal in 1967. The game features pillars and floor pieces where the players build a tower and then remove pieces hoping that the tower doesn’t fall down. Careful The Toppling Tower Game is a decent game but it suffers from being a little too challenging.

Overall Careful is a fun game. It is a fun dexterity game where players try to remove pillars without knocking over the tower. If you like games like Jenga I can’t imagine you not liking Careful. Careful is a more interesting experience than Jenga in my opinion. Unlike Jenga that just uses wooden blocks, Careful uses actual pillars and actually feels more like a real tower. Careful is fun to play and if you like to see towers fall down, you will love it when the tower falls down in Careful since pieces end up flying everywhere. Careful had a lot of potential and could have been a great game.

Unfortunately the game is too difficult. The game is easy to learn and play. The problem is that the game is too challenging due to the tower not being very stable. The tower is so wobbly at times that it actually almost fell over while I assembled it to take the picture earlier in the post. Maybe the condition of my copy of the game caused the wobbliness but I don’t think that is the case. I think the main reason the tower is so wobbly is due to the height of the pillars. If the pillars were shorter I believe the tower would have been more stable. The only advice I can give is to play the game on a very level surface or the tower may fall down before you are even able to play the game.

Due to the wobbly nature of the tower, the game is quite a bit harder than you would expect. If you don’t have at least somewhat steady hands, you are likely to knock the tower over with the first pillar you try to remove. Even with pretty steady hands the game is still quite difficult. In the games I played we were lucky if all three players were able to remove two pillars before the tower fell down. The quick nature of the game is disappointing since these type of games thrive on the tension created when a tower has survived many rounds and is on the tipping point. I really would have liked to see the game get down to two or three pillars on each level but I can’t imagine that ever happening.

In addition to the difficulty, Careful has quite a bit of luck involved. The color you spin is likely to determine if you will be successful or not. The blue and green pillars (5 points each) are much easier to remove than the red and orange pillars (10 points each). The blue and green pillars are usually more in the center of each floor which means that they don’t bear as much of the weight of the tower. Therefore they are much easier to remove without disturbing the tower. The red and orange pillars always start in the corners of each floor so they are always a load bearing pillar at the start of the game. In order to remove them you need to redistribute the weight so the tower doesn’t fall over. Therefore if you keep spinning for red and orange pillars you are much more likely to tip over the tower.

As you can probably see from the picture earlier in the post, the “Careful” tower is quite tall. It probably takes a minute or two to assemble which isn’t that long. It is disappointing though since sometimes that is only how long the tower stays standing. After assembly the tower is probably close to four feet tall. Due to its’ height, Careful has to be played on the floor unless you have tall ceilings and would like to play the game while standing on a step stool or a ladder. Your floor has to be very level as well or that will add to the wobbliness of the tower. This is not a huge problem but if you would like to play the game with older players who would have a hard time getting up from playing the game on the floor, it could become an issue.

Overall I was disappointed with the quality of the components. In a game like this you can expect that there is going to be some damage to the components due to the tower falling over. The damage to the components of the game I picked up were more than I was expecting. My copy of the game already had some cracks on the floors. I don’t know how often the previous owner’s played the game and the game is almost 50 years old but the floors had quite a bit more damage then they should have. The problem comes from the fact then when the tower falls, it falls hard which leads to a lot of damage to the floor pieces. I think some of this could have been prevented if the game used a thicker plastic for the floor pieces. No matter how well you take care of the game, I think the game will show significant signs of use after being played.

Other than the floor pieces, the other pieces will most likely show quite a bit of wear including scratches and scuffs. That is to be expected though since they will crash to the ground every time you play the game. The pillars, base, and the bell tower seem to be more durable than the floor pieces though. Also for you space conscious readers, the box for Careful is huge. If you don’t like games that have huge boxes, Careful may not be for you.

Careful The Toppling Tower Game is a fun game. If you like games like Jenga I can’t imagine you not enjoying Careful. Unfortunately the components are of a lower quality than you would like and the tower is not as stable as it should have been. The instability of the tower makes the game is a lot harder than it had to be.

My siblings and I played Careful for hours and hours. The challenge is what made it fun. “It’s too hard.” isn’t a good reason not to play. I wish it was still in production.

We could remove a lot more than just two pillars each. There was a trick to getting the high value corner pieces out. It's speed. You took a pillar piece you already removed and used it to quickly knock a corner pillar out.

As kids, this game was a favorite -- played far more regularly than any other game -- because we could remove so many pillars and it always ended with a satisfying crash. Sounds like you didn't play it enough to get good at it.

But, thanks, I was trying to remember the name of the game. And you reminded me that it was called "Careful." I can remember us saying that to each other when the bell started jingling.

i am being a little fussy.... but whwn i was a kid i had this but the spokes didn't have openings. do yours thanks peggy

How you set up the floor pieces makes a difference. If you rotate each floor 90 degrees from the previous one, the tower stays more stable as pieces are removed. I didn't see anything in the set up that addresses this. Play around with the stacking rotation and see what works for you

Unfortunately since writing the review I have gotten rid of my copy of the game so I won't be able to test out your suggestion. Thank you for the suggestion though since it might be helpful for other people that have a copy of the game.

I think this person completely missed the whole point of this game. The tower is supposed to be unstable, its supposed to be extremely challenging, thats the whole fun of it, its actually a game that challenges you instead of handing you everything you need to win like most games nowadays.

When I wrote the review I wasn't necessarily saying that the difficulty was a bad thing but I felt the wobbliness had to be pointed out since it is quite a bit harder than your typical dexterity game. I am generally pretty good at dexterity games and I still struggled with the game. I actually found the difficulty to be an interesting element of the game. I just think the game could have still been challenging without being so wobbly that you can barely make it through a couple rounds before the tower collapses. The tower should have been sturdy enough where it would stand long enough that you wouldn't always have to reassemble the tower. If anyone is looking for a challenging dexterity game though and you don't mind having to regularly reassemble the tower, Careful should appeal to you.