To begin the game the seven power gems (glittery/shiny) need to be separated from the other jewels and placed into the bag. The players then randomly grab from the pile of other gems and fill in all 64 spaces of the gameboard. Once all of the gems have been placed on the gameboard, if there are three gems of the same color in a row either vertically or horizontally these gems are removed from the board and new gems are placed in their spots. Once the board has no sets of three gems, the board is set for play. All of the remaining gems are placed in the bag.

Each players’ turn begins with swapping two side-by-side gems to create a vertical or horizontal row with three or more gems of the same color next to one another. If the player successfully creates a group of three or move they remove those gems from the gameboard. The player then pushes any gems that they can away from their side of the gameboard. If after pushing the gems more groups are created, the player gets to remove those as well and push the gems away from them. When no more groups are created the player scores the groups they claimed. The player receives coins of the color of the gems they removed based on the following chart:

If a player misses a group formed during their turn, the next player is able to claim it before they begin their turn and receive the corresponding coins. If a player cannot find a way to swap two gems to create a group of three or more, their turn passes to the next player. If none of the players are able to find a way to create a group, the middle four gems are replaced with gems from the bag and play continues with the original player.

Play continues until one player obtains a set of 3 coins of three different colors. That player is the winner.

The picture above shows the gameboard at the beginning of the players’ turn. 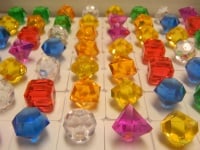 Looking at the gameboard the player determines that it would be best to swap the yellow and orange gem in the middle of the picture. 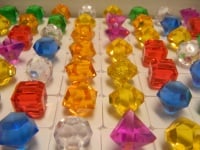 After the gems are slid, a group of three purple gems is created. The player would net one purple coin from the group.

The purple gems are removed from the gameboard. Since there are no more groups of gems, the player’s turn is over. They fill up the vacant spaces on the gameboard and play passes to the next player.

For those of you unfamiliar with Bejeweled, it is a popular video game franchise that was first created in 2001. In Bejeweled the object of the game is to match three or more of the same colored gems in order to score points. Over the years several video game sequels and the board game that I am reviewing today were created. Looking at the Bejeweled box the game looks like a cheap cash grab to make money off the popular PC game. Due to this fact I didn’t have high expectations for the game. The only reason I picked up the game is because I found it for less than $1. No matter how bad the game was it had to be worth at least a $1 to try it. As it turns out, Bejeweled the board game actually surprised me quite a bit.

The board game plays very similar to the PC game. You swap two gems and then collect all of the groups of gems that you ended up creating. Those familiar with the PC game will pick up the game very easily. Those not familiar with the PC game shouldn’t have much trouble learning how to play the game since it is quite easy to pick up. A typical game lasts around 15 minutes but that could change based on how quickly players make their moves and how lucky a player gets.

Overall the game has more strategy to it than I was expecting but it also has quite a bit of luck. In order to do well in the game you need to at least somewhat think out your moves. If you just switch gems to grab the first group you see you may be missing out on a better move. You need to think ahead before making a move since you want to see if your move will create a cascade effect. You are almost always better off making a play that will in turn create additional groups since you will get more coins from your move. You also need to think out your moves in order to prevent your opponents from getting multiple groups on their next turn.

Unfortunately, but not surprising, luck will play a factor in who eventually wins the game. Any game that has a random draw element will have some luck involved and Bejeweled is no different. Gems may be drawn from the bag at any time that will set up one of the players to make a big move. No skill or strategy can change that. Some players will get lucky and have the board set up to get multiple groups in a turn while others can only get one group. I usually don’t like when luck has an effect on the ultimate outcome of the game but there is nothing the game could have done to eliminate the luck aspect.

One of the biggest surprises with the game are the components themselves. Hasbro could have been cheap and just used cardboard or plastic disks for the gems and it wouldn’t have changed the game at all. Instead Hasbro created 3 dimensional plastic gems. They aren’t made of the greatest plastic but they serve their purpose well. My only slight complaint with the gems is that they could probably have done a better job making the power gems easier to distinguish.

Other than the gems, the components are pretty standard. The gameboard is your typical plastic. I wish the bag would have been larger though since it is hard to pick a random gem when the gems fill up most of the bag. The small bag makes it hard to dig without knocking gems out of the bag.

The biggest problem with the game is the fact that it is only slightly different than the PC game. The only real differences from the PC game is that four players are playing off the same board at one time and that you need to collect groups of coins in order to win the game. Otherwise the gameplay is the same as the PC game. If you have played the PC game and didn’t like it there is nothing here that will make you change your mind. If you like the PC game though and would like a little change, I think you will really enjoy the board game.

The Bejeweled board game may look like a cash grab but I have to admit that I was surprised by it. While it is not the best or the most interesting game in the world, I had quite a bit of fun playing the game. The components are nice and the game is quick and easy to play. The game is only slightly different than the PC game though so the board game is not a very unique game experience.

I'm going to try this soon with the children. I have a 7 and almost 10 year old. I got my game at Goodwill yesterday and paid 3 dollars for it. One gem was missing, a few tokens and the directions. So, thanks for posting the directions. The children love the gems and will likely play and use them with other toys, like Superheros or smurfs.