In the past we have looked at quite a few of the UNO spinoffs. We have looked at games that have added spinners, scales, flippers, electronic units, and other contraptions to the original game. We have also looked at games that have taken the UNO theme and applied it to other genres. Today we are looking at UNO Blitzo which takes UNO and turns it into an electronic game similar to Bop-It. I didn’t really know what to expect from UNO Blitzo since it is diverges significantly from the original game. UNO Blitzo has a surprisingly long learning curve but once you get a hang of it there is an interesting twist on UNO hidden underneath the surface.

How to Play UNO Blitzo

The UNO Blitzo game unit has a couple different types of buttons. The number/color pad in front of a player is used to play cards. The yellow piece on both sides of the number/color pad is the “command card” and it can be pressed in either direction. Finally the button in the middle of the gameboard is the UNO button.

When a player’s turn begins the electronic unit will issue a command. The player has to follow the instruction correctly and within time in order to avoid a penalty. The commands given by the unit are as follows:

Skip: Press your command card in the direction of play to skip the next player.

Draw: Press your command card in either direction in order to make that player draw one to three cards. The player that you made draw cards will take the next turn.

Reverse: Press your command card in the direction opposite of the order of play. This will reverse the play order.

Wild Card: Press any of your lit up color/number cards in order to play it. 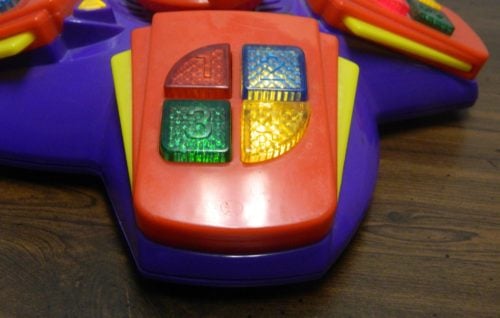 This player was given a command which allowed them to play their red/one card.

When a player has only two cards remaining (two buttons lit up) and they can play one of them on their turn, the player must press the UNO button instead of pressing the color/number button. This will play the card for the player automatically while also declaring UNO for the player. If a player presses the color/number button instead of the UNO button, they can get caught not calling UNO. If one of the other players press the UNO button before the next player takes their turn, the player who didn’t call UNO will be given more cards. 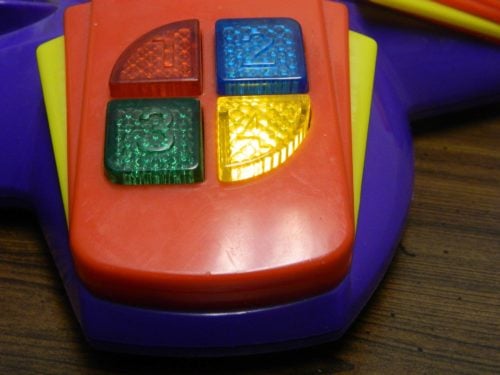 This player has played all but their yellow four so they are currently at UNO.

The first player to win four rounds wins the game.

My Thoughts on UNO Blitzo

Basically when you break down UNO Blitzo, it feels like the original game that was streamlined in order to work as an electronic game. I honestly would say that the game feels like a combination of Bop-It and UNO. Basically the game takes the theme, the special cards, and the idea of being the first player to get rid of all of your cards from UNO. This is combined with the follow the directions gameplay from electronic games like Bop-It. Basically the game unit gives you a command and you need to press the appropriate button in order to avoid a penalty.

When you first look at UNO Blitzo it looks like a really simple game. In a lot of ways the game is pretty straightforward but I would say that the game has a longer learning curve than you would expect. It will take most players at least a full game in order to understand what button they are supposed to press for each command. The colors/numbers are pretty straightforward but when you add in the button that you have to press left or right and the UNO button it does take a while to grasp everything before you are fully ready to go. Because of this I would recommend playing your first game on the lowest difficulty setting as it doesn’t have a time limit and it allows you to correct your mistakes. Playing your first game on the easiest difficulty allows you to focus on learning how to play the game instead of quickly trying to press a button.

One thing that I think will always be hard to get a hang of is the idea of having to press the UNO button instead of pressing the button for your second to last card. After enough games you can probably get used to it but I don’t think it adds a lot to the game. It is just another thing you have to remember and it doesn’t add much to the actual game. Most players will forget to press it and the other players will forget to call them out for not pressing it. I honestly would consider creating a house rule where you just press the corresponding number/color and none of the players can call you out on not pressing the UNO button. This way you can just eliminate the mechanic that I think adds more hassle to the game than it is worth.

While I think the learning curve is a little steep, once you get a hang of the game it is not that hard to play. Once everyone knows what they are doing, UNO Blitzo really starts to pick up. When you start playing the higher difficulty levels the game can get kind of addicting. It is actually pretty fun trying to press the correct button as quickly as possible before you run out of time. At the higher difficulties the game moves quite quickly which keeps you on your toes.

In general I would say that UNO Blitzo is a game that relies more on reaction time than strategy. Basically the only potential strategy in the entire game is deciding who to force to draw cards when you are given the draw command. Otherwise you really have no choices in the game. Instead of strategy you need to rely on pressing the correct button as quickly as possible in order to improve your odds of winning the game. If you play on one of the higher difficulty levels you need to think quickly about what button you need to press and act before you run out of time. There is actually a decent amount of skill required in the game as faster players are naturally going to be better at the game than other players.

I kind of have mixed feeling about the idea of instant UNO. Instant UNO is pretty overpowered as it gives a player a big advantage in the game. Being able to get rid of all but one of your cards can be huge. Even though I think it is overpowered, I am okay with it for two reasons. First you usually don’t get the color/number you need on your next turn so it doesn’t lead you to automatically winning the game. You likely are going to have to wait two or more turns to get rid of the last color/number so you don’t gain as big of advantage as you would think with an instant UNO. The other reason that I don’t mind it is if you are playing at the highest difficulty level you have to recognize the right sound in order to get instant UNO. If you press the button on the wrong sound you will end up drawing cards. This adds some risk/reward to the game as you have to be sure that you heard the right sound before you press the UNO button.

I will give UNO Blitzo credit for being flexible with the number of players needed to play the game. The game can actually be played with only one player as you can play against the computer. I didn’t try out the single player but I like that it was included. While you can play the game with only two players, I personally would probably recommend playing with three or four players. With only two players you will be constantly passing back and forth to one another. More players add a little more variety to the game.

UNO Blitzo can be fun to play but it does have some issues. I think the biggest problem is that the game relies heavily on luck. In some rounds you will have no chance of winning due to no fault of your own. The game at times seems to have something against one of the players. It will regularly give the players next to them skips, reverses, or draws which prevent this player from ever making any progress. On top of that if the game unit never gives you the right colors/numbers, there is nothing you can do to get rid of your cards. At times your fate in the game is going to rely more on luck than your skill.

While this doesn’t actually impact the gameplay, I don’t like that the game says out loud how many cards a player had to draw. The problem is that this is said in the exact same way as the game giving out a command to play the corresponding number. This regularly leads players to press the same number button thinking that is the card they are supposed to play. The game usually didn’t punish players for acting based on this number but it still messed with players. I don’t know why the game needed to say how many cards were drawn since players could just look at what cards they now have to get rid of.

As far as the electronic unit is concerned, there are things that I liked and didn’t like about UNO Blitzo. The copy of the game that I found at a rummage sale wasn’t in good condition and yet it works surprisingly well. The buttons are quite responsive. The game unit works surprisingly well but I had a couple problems with the lights. At times it was hard to tell whether the green light is lit up and sometimes the blue button looks yellow when it is lit up. I am curious whether these issues have to deal with the lighting in the room where I played the game. I actually think UNO Blitzo might benefit from being played in the dark which would make it easier to see which buttons are lit up.

Should You Buy UNO Blitzo?

UNO Blitzo is one of those UNO spinoff games that have little to do with the original UNO. Outside of the theme and the special cards, UNO Blitzo plays nothing like normal UNO. The game actually plays more like other electronic games like Bop-It where you are given a command that you have to follow. I was actually surprised that the game had a steeper learning curve than I was expecting. After you get over the learning curve though, UNO Blitzo is actually kind of fun. Having to quickly figure out and press the right button is pretty exciting. The problem is that the game relies heavily on luck. There will be plenty of rounds that you will lose where there is nothing that you could have done to have won the round.

If you don’t like UNO or electronic games, UNO Blitzo won’t be for you. If you think the idea of applying the UNO theme to an electronic game like Bop-It sounds interesting though, you may get quite a bit of enjoyment out of UNO Blitzo.

If you would like to purchase UNO Blitzo you can find it online: Amazon