Shuffle the cards and deal out eight cards to each player. The rest of the cards form the draw pile. The dealer gets to be the first player.

On a player’s turn they perform two actions.

On a player’s first turn they must play a gem card. Each player will be building a 3X3 grid. Once a card has been played to the grid its’ relative position cannot be changed. The cards are not locked into position though as you add more cards to the grid, each card’s position in the grid may change positions. Gem cards can be played on empty spaces in the grid or on top of other gem cards in your grid.

Since the player has only played two cards to their grid, neither card are locked in position. The three card has to stay to the left of the four card though. The next card can be played in any direction from the two cards that have already been played. 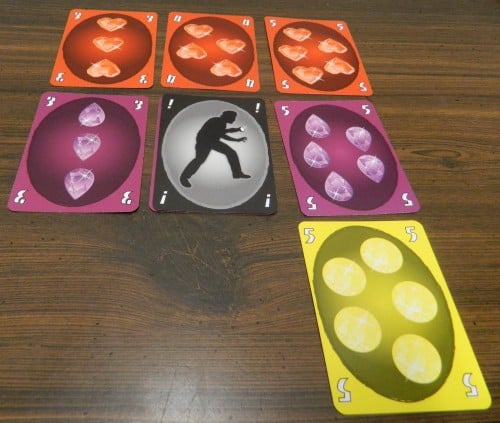 When the first player completes their 3X3 grid with nine gem cards, that player has finished the round. They score three bonus points for finishing first but they are unable to play anymore cards for the rest of the round. The other players are able to complete their 3X3 grid though. Players can no longer play thief cards against the other players though. Players still in the game also cannot draw anymore cards but can play as many cards from their hands as they want until they complete their grid.

Once everyone has completed their grid, each player’s grid is scored (see below). After scoring is completed, the next player becomes the dealer and another round is played. The new dealer starts the next round. The game lasts for as many rounds as there are players.

Each player has eight possible scoring areas. Each player’s 3X3 can score in the three horizontal rows, the three vertical columns, and the two diagonals. Players score points as follows in each row, column and diagonal:

If a row, column or diagonal would score in more than one category, the player receives the points for the multiple categories. For example if a player gets three of the same number of the same color, that would score six points. 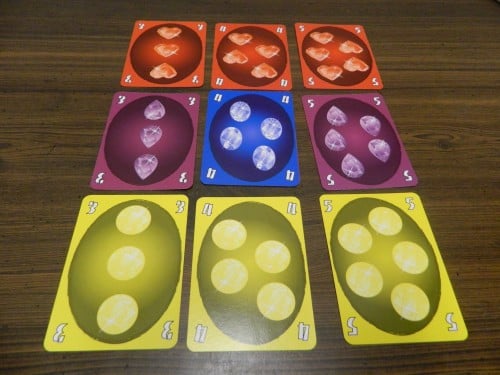 After all of the required rounds have been played, players add up their points for all of the rounds. The player with the most points wins the game.

Playroom Entertainment is mostly known as a game company that makes games for children and families. Having played a couple of their games in the past, I would classify most of their games in the light to moderate strategy category. Today I am looking at another game in their catalog, StrataGem. While not fantastic, StrataGem is an interesting light to moderate abstract strategy game that has more strategy to it than you would expect.

Just like with all Playroom Entertainment games, the game is meant for families so the gameplay is pretty simple overall. The rules take minutes to read and about the same to explain to new players. The most complicated part of the game is probably the scorekeeping which is due to how much is done after each round. While the game has a recommended age of 10+, I think younger children could play the game even though they might not understand all of the strategic elements of the game.

While the game is pretty simple, there is a decent amount of strategy to the game. Your goal is to try and score points in all eight scoring zones. For every card that you add to your grid you really need to think about what it will do for all of the scoring zones that it is in. There is actually quite a bit to consider before you play a card. This is why the game has a deceptively higher amount of strategy then you would think. The player who is best at figuring out their grid will likely win the game.

This doesn’t mean that there isn’t quite a bit of luck in the game. Like any card game, card draw luck will likely determine who ends up winning the game. Draw the right cards and you can score a lot of points in a round. Don’t draw good cards and no matter how good your strategy is, you are unlikely going to win the round.

While I like the idea behind the thief cards, in practice they aren’t as useful as you would think. I think this mostly comes down to there being too many of them in the deck. 20% of the cards in the game are thief cards. That is way too many in my opinion since the cards are all over the place. Having so many thief cards is a problem because it makes playing them against other players pretty pointless. Likely every player will have at least one in their hand so if you play a thief card against one of their important cards they will just play their thief card to remove it. Thief cards are generally more valuable as a defensive card/deterrent to other players. I think you should only play a thief card against another player if your hand is either full of them or none of your cards on the table are very important to you so you don’t have to protect them.

It is a shame that the thief cards aren’t more important because messing with players in StrataGem could be huge. Messing with one card can ruin a player’s strategy since each card affects two to four different scoring zones. To score a lot of points in a round all of the cards need to work with one another. I am not big into mechanics that are used to mess with other players but I think more could have been done with the thief cards. Since it is so hard to actually use your thieves to stop other players, there isn’t much interaction between the players. The game kind of plays like a solitaire game where every player does their own thing and at the end compare their scores.

While the three bonus points are helpful, I would recommend not finishing your grid unless you are to the point where you won’t be able to improve your score. Even though the other players are unable to draw any new cards, being able to place as many of their cards as they want is likely to score them more points than the three bonus points you will end up scoring by finishing your grid. If you have already set up your grid to score as many points as possible, you might as well take the bonus points and force the other players into finishing up their grids not being able to draw additional cards. It is not worth hurting your own grid to do so though.

I think the biggest weakness with the game is actually the scorekeeping. I like that you can score in quite a few ways and it is nice to hear your score continuing to go up as you add up all of your different scoring zones. The problem with the scorekeeping is that it takes longer than it probably should. You have to analyze eight different scoring zones for each player which while easy on their own, takes longer when you have to do it eight times for every single player. While the scorekeeping gets easier the longer you play the game, you almost need two players working together to calculate the scores in your first couple of rounds.

Another problem with StrataGem is that the game seems to run a little long if you are playing with more people. Since you have to play a round for each player, the more people playing the game the longer the game is going to take. Even at four players I thought the game was starting to run a little long. I think with five or six players it is going to run quite long. The game only takes like 20-30 minutes to complete but it feels like it takes longer than it should.

The components for StrataGem are pretty much what you would expect. The cards are your typical card stock. The artwork is perfectly serviceable and looks pretty nice. It is kind of boring though as the game’s theme never really factors into the game.

Basically StrataGem is a very solid light to moderate strategy filler game. The game is fun and has more strategy to it than you would expect from a simple game. The game doesn’t do anything particularly new though. The game relies too much on luck at times and the game lacks interaction between the players sometimes feeling more like a solitaire game where everyone just compares their scores at the end.

If you don’t like these type of light to moderate abstract filler games, you probably won’t like StrataGem. If you like these types of games though I think you should enjoy StrataGem. As a bonus as of the date of this post you can find the game online for just a couple dollars.

If you would like to purchase StrataGem you can purchase it on Amazon. StrataGem