It’s been awhile since I wrote one of these rummage sale and thrift store haul posts. Over the last year or so, the thrift stores in my area have gotten worse and worse and of course Wisconsin’s winters make rummage sales almost completely disappear (other than the odd estate sale here or there). For the first time in about a month and a half, I actually went out thrifting and rummage sale hunting over the weekend. While I didn’t take home an epic haul, I definitely did well enough to get hyped for the upcoming rummage sale season. As usual, I was very thrifty and rarely paid more than a dollar or two for everything you will see in this post.

Over the last few months, I have become addicted to collecting Funko Pop Vinyls and other products released by the company. Unfortunately, since I try to be as frugal as I can and I rarely find them at thrift stores or rummage sales, my collection is pretty small right now. Before finding three Pop Vinyls this weekend, my collection consisted only of Jon Snow and Oberyn from Game of Thrones and Finn and Rey from Star Wars: The Force Awakens. I had to go a little higher than I usually like to on the Superman pop but all three and the Mystery Mini were really good deals (especially Elsa and Kristoff which were found at a pay-by-the-pound Goodwill outlet). 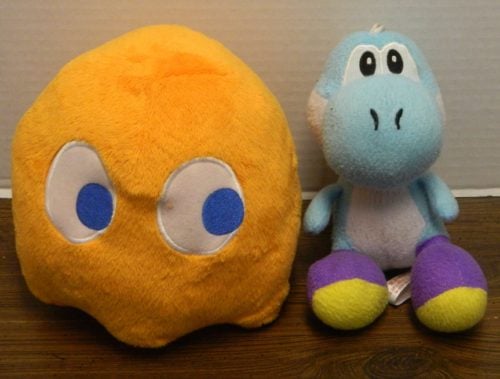 Yes, I know these are a little dirty (they were found at a Goodwill outlet) but they should clean up relatively well and both are characters from games that I love. Yoshi is one of my favorite Mario characters and this plush is adorable (though I do wish it was his normal green color). However, the Pac-Man Clyde plush is even better. While I wasn’t born yet for the whole Pac-Man fever thing, Atari was actually one of my first introductions to the world of video games (many years after the console came out) and Pac-Man was not surprisingly one of my favorite games for the system. Clyde is probably also the best ghost to get since he is the one who is always off doing his own thing instead of chasing Pac-Man down. 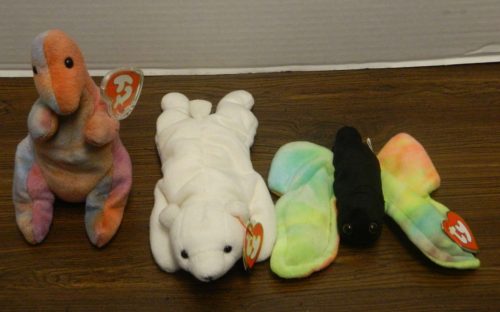 Yes, I was a big Beanie Baby collector back in the late ’90s and early 2000’s. I do still collect them, but only older ones that were retired before I started collecting or newer ones that are adorable or unique in some way. Rex (the dinosaur) used to be worth hundreds of dollars when Beanie Babies were hot. While his value has since fallen sharply, he is still worth about a hundred times what I paid (they still usually go for at least $20 on eBay). I wasn’t sure if I already had Chilly (the polar bear) or Flutter (the butterfly) but I was definitely willing to take the risk for a quarter (and Flutter actually seems to consistently sell for about $50 on eBay so it was a very good deal regardless). 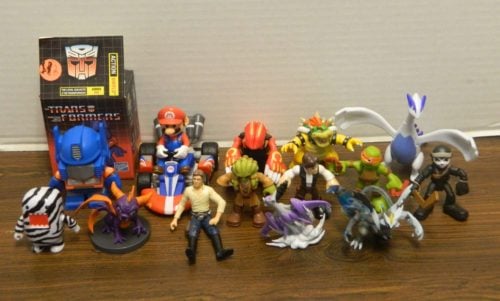 Miscellaneous Toys ($1 for Transformers Optimus Prime Action Vinyl, $0.89 Per Pound for Everything Else)

I always love finding cheap toys for fandoms that I love. Except for the Transformer, all of the toys pictured here were found at my Goodwill outlet for $0.89 per pound. Among the finds are a Mario Kart toy, a few reasonably high quality Pokemon toys, some newer Teenage Mutant Ninja Turtles toys that look pretty adorable, and the first Domo toy in my collection. 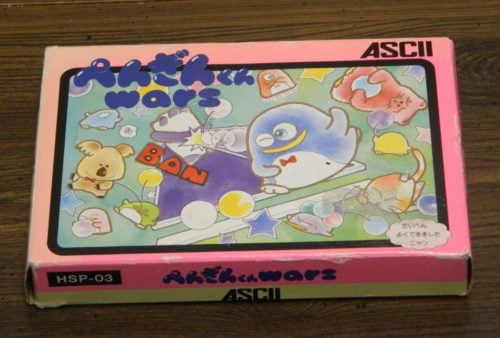 Even though I am a video game collector with over a thousand physical games in my collection, I believe this is the first time I have even seen a Famicom game, let alone find one at a thrift store for less than a dollar. While I was hoping that the game was going to be valuable (even though I planned to keep it anyway), unfortunately you can get the game complete for less than $10 on eBay. However, even though I have no way of playing the game, it will still make for an interesting addition to my video game collection and a nice display piece. 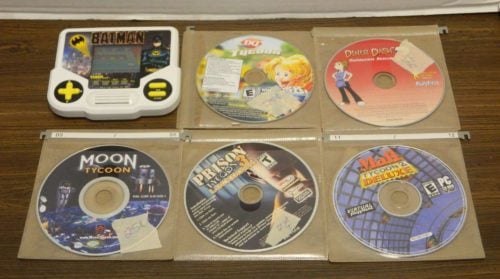 Unfortunately, other than the Famicom game the video game pickings were pretty slim this weekend. I know all of the games shown here are pretty bad but I am nostalgic about Tiger Electronic games and older tycoon games. They will definitely suck and some of the PC games might not even be playable on today’s computers, but the price was definitely right. 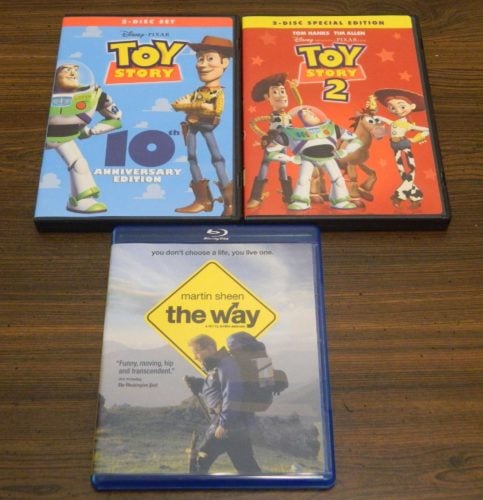 While I only found three new DVDs and Blu-rays for my collection, the quality was pretty high. While I already owned Toy Story, the discs were in pretty bad shape and these ones are pretty much perfect. Toy Story 2 is a great new addition to my collection, I’ll pay a dollar for any Disney movie I find and especially one as good as Toy Story 2 (one of the best sequels of all-time). Finally, The Way on Blu-ray for two dollars is a solid, though unspectacular deal. The reason I purchased it was that I find that I usually love films about hiking (I like endurance sports and dream of being able to do things depicted in these films sometime down the road) and this film was definitely one I wanted to watch soon. 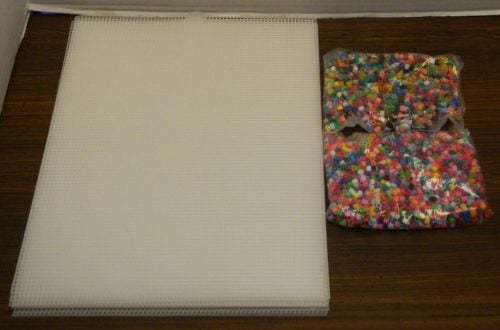 Not exactly exciting but I always make sure to pick up any cheap craft supplies that I find at thrift stores and rummage sales. While the perler beads are just an okay deal, the plastic canvas sheets are a pretty good bargain. I’ve already tried perler beading and love doing video game bead sprites (look out for a post on this blog about the hobby pretty soon) and plastic canvas is something I plan on trying very soon. 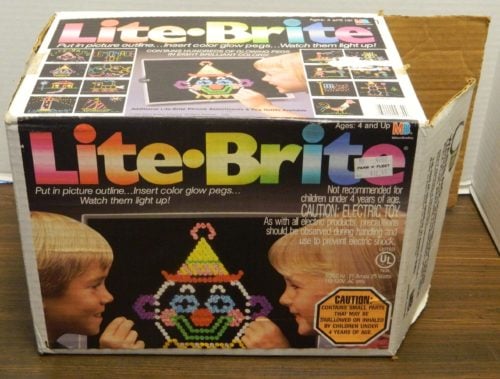 I had this Lite-Brite with the exact same box as a kid and it is one of the toys that I am most nostalgic about. I used to play with my Lite-Brite all the time as a kid and I have an idea for a post in the near future. Finding a Lite-Brite in the box with plenty of sheets and pegs for a dollar and fifty cents is a steal, even though I still have my childhood copy. 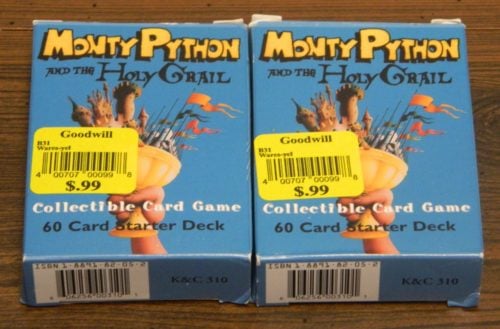 While this long-dead CCG has terrible ratings on Board Game Geek and I have yet to watch a single Monty Python episode or movie (I know that I need to change that very soon), I’m a sucker for old CCGs (especially oddball and unsuccessful ones like this). During my teens I used to play a lot of them and I have since accumulated a pretty large collection filled with everything from the Survivor TCG to a religious one. Monty Python is certainly a weird enough idea for a card game to make my list of top five weirdest CCGs in my collection. I am definitely not expecting the Monty Python and the Holy Grail Collectible Card Game to be good but it is certainly worth trying for a dollar per starter deck. 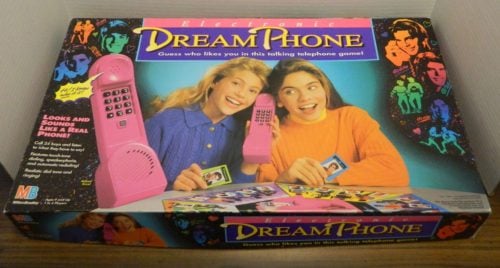 Yes, I’m a guy but this game is quite rare and can fetch about $50 on eBay or even more on Amazon. This game probably won’t be in my collection for long but I have actually already played it for an upcoming review on the blog. Keep an eye out for that in a few weeks, the game is actually not quite as bad as you would think (even though I am clearly not in the target audience). 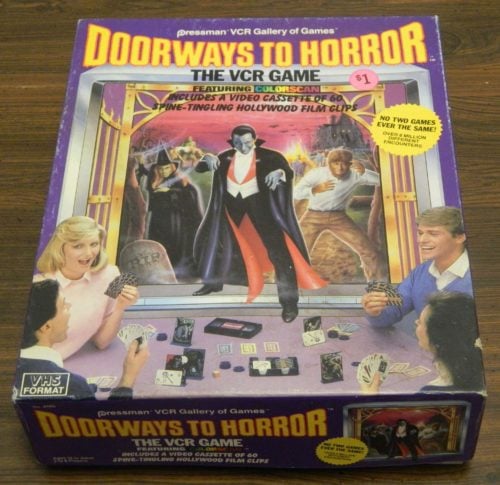 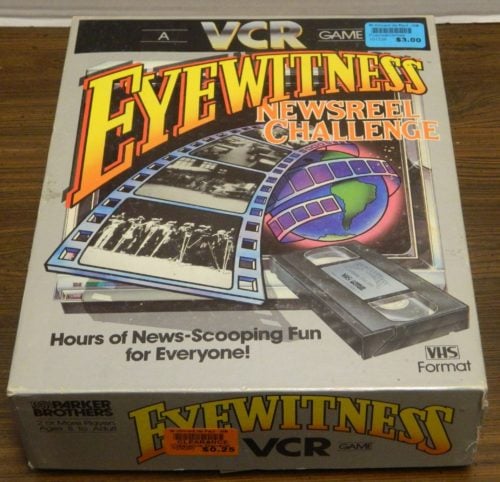 Doorways to Horror was picked up for a dollar at a rummage sale while Eyewitness Newsreel Challenge was found for a quarter on clearance at a St. Vincent de Paul. While Doorways to Horror doesn’t have the best ratings, it was made by famed board game designer Sid Sackson and the theming is definitely appealing to me (I love cheesy horror films from the past). Eyewitness Newsreel Challenge has even worse ratings on Board Game Geek but it looks like it could have a chance of being fun (and is certainly worth the risk at just $0.25). 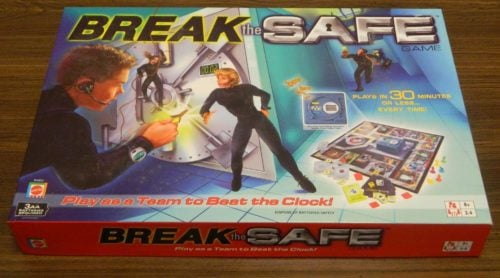 Break the Safe Board Game (Quarter)

Break the Safe is another game that I have already played and will be posting a review of in a few weeks. For a Mattel game, it is a surprisingly decent co-operative game though it is mostly just a roll-and-move game with a ticking clock and a little bit of strategy. At the very least, it is one of the better roll-and-move games that I’ve played and it was definitely worth the quarter that I paid for it.

While the blue sticker says the game was a dollar, it was actually on clearance for a quarter (I am shocked that nobody bought this “gem” of a game at the original price). Even if I know they are probably going to suck, I just can’t stop myself from picking up these really obscure board games as long as they are a dollar or less. Usually you can sell them on Amazon or eBay for at least a mid-sized profit anyway and occasionally you do find a hidden gem (but I seriously doubt this will be one of them). G. Gordon Liddy’s Hardball Politics ’96 has a whopping two ratings on Board Game Geek but expect a review here on Geeky Hobbies pretty soon. 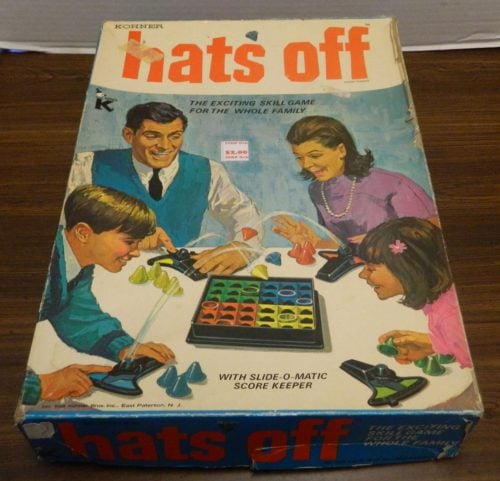 This game’s box is in pretty rough shape. Kohner games are obviously meant for children but they are usually fun enough to play a few rounds of (even for adults). In Hats Off, players are trying to land as many of their six hats in their own color’s target area as they can. Simple concept, but it actually sounds like fun. 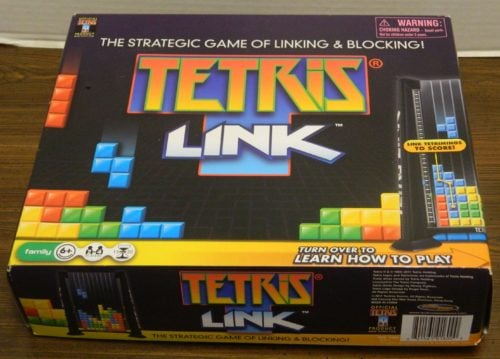 I’ve played one of the older Tetris board games before (and I believe it was pretty bad if I remember correctly) but this one actually seems pretty good (it has a solid but not spectacular 6.0 on Board Game Geek). Players attempt to link three or more of their tetrominos together while trying not to leave empty spaces and attempting to block their opponents from doing the same thing. So basically, Tetris mixed with a bit of Connect Four. Definitely worth a shot for a dollar. 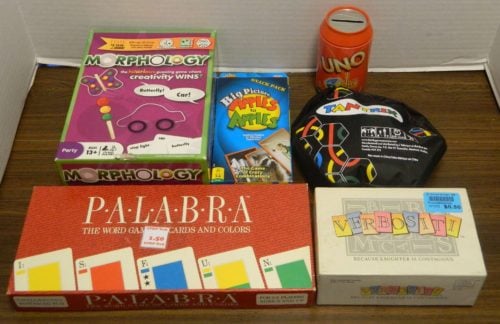 Morphology is a Pictionary-like game where you use random objects to try to get your team to guess your word, Big Picture Apples to Apples adds picture cards to one of my favorite board games, Uno Dice Game is a two-player dice game that is similar to the main game, Tantrix is an abstract strategy game that shocked me when I found out it was in Board Game Geek’s top 2000 games, and both Palabra and Verbositi were cheap word games (which I’m always willing to try at least once).