As with all Trivial Pursuit games, players take turns rolling the dice, moving their tokens that amount (in any direction they wish), and attempting to answer a trivia question in the category of the color they landed on (in this version, blue = TV, pink = fads, yellow = buzz, purple = music, green = movies, and orange = sports and games). If a player answers a question correctly, they get to continue rolling, moving, and answering questions until they answer one incorrectly.

Players may move in any one direction they wish, even through the hubs, but the goal is to land on the headquarter spaces. Landing on a headquarter space gives a player a chance to win a scoring wedge for that category. While all of the other spaces have players answer questions off of the question cards, headquarter spaces are all DVD questions. These questions are very similar to Scene It?’s DVD questions, utilizing things like video clips, pictures, and audio clues to make some more interesting questions (but also making them easier). 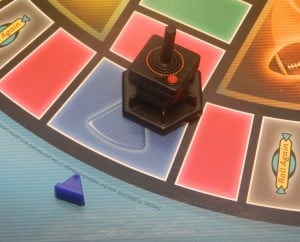 This player has landed on the blue headquarter space and will get the chance to answer a DVD question about TV to try to win a blue scoring wedge.

The ultimate goal of Trivial Pursuit: DVD Pop Culture is to get all six color wedges. Once a player has gotten all six wedges, they should start moving towards the central hub. They must land in the hub by exact count in order to get a chance to answer the final game-winning question (otherwise they continue moving through the hub until they get the dice roll they need). When a player has landed in the hub by exact count, select the “for the win” category in the DVD’s menu screen. This will be a question from a random category that is only for the current player (other players are not allowed to answer at all). If the player answers incorrectly, they must leave the hub on their next turn and try to land on it again by exact count in order to get another chance at it. If they answer correctly, they win the game. 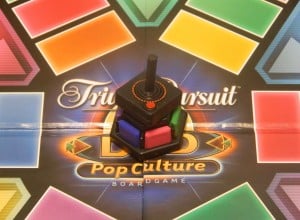 This player has all six scoring wedges and has landed in the central hub by exact count. They will get the chance to answer a DVD “for the win” question and if they are correct, they win the game. Otherwise they must leave the hub on their next turn and again land in the middle by exact count to get another chance.

I wrote in my Trivial Pursuit Steal review that I’m a fan of trivia (and pretty good at it, at least in the areas I enjoy like entertainment and sports) but usually don’t like Trivial Pursuit games because of their high difficulty and questions that mainly come from before my time. Thankfully, Trivial Pursuit: DVD Pop Culture was much more up my alley than most games in the franchise (since the game was published in 2003 and is obviously more updated). However, just like the main game it has some poorly designed rules that make the game extremely hard for non-trivia champions to complete in less than an hour or two.

Since the main thing distinguishing Trivial Pursuit: DVD Pop Culture from other games in the series is the DVD questions, let’s start with that. It’s pretty obvious to me that Parker Brothers saw the success of Scene It? in the early 2000’s and tried to capitalize on it with a DVD version of Trivial Pursuit. While this game doesn’t utilize the DVD quite as well as most Scene It? games do, it still is an overall positive addition to the game. These questions are way easier than normal Trivial Pursuit questions. In our game, of the 20 or so DVD questions that we got, our entire group was stumped on maybe one of them (at least one person knew the answer to every other one). If you are playing with a group of trivia masters, this might not be a positive but for more average trivia players like myself this is very good.

The DVD questions also help (somewhat) solve one of the big problems with Trivial Pursuit, the fact that only one player plays at a time while the others sit around for several minutes with nothing to do. Towards the end of the question, everybody who doesn’t already have that color wedge is allowed to shout out a guess (so they have actually have something to do instead of twiddling their thumbs). I wish the “all play” would show up a little earlier in the question than it does (it flashes on the screen only a few seconds before the answer is revealed and the current player gets far too many clues before everybody is allowed to play) but it’s still a positive addition.

Unfortunately, even with its updated questions and positive additions to the game, Trivial Pursuit: DVD Pop Culture is still just average mainly because of its horrible rules that date all the way back to the first Trivial Pursuit game. It is such a dumb rule that only the headquarter spaces award scoring wedges. It’s so dumb that I didn’t even know of the rule until I played this version since I had always played with every space awarding a scoring wedge of that color and assumed that’s how the game was played. Maybe my group is just terrible at Trivial Pursuit games but if we played by this rule, games would take hours to complete. It’s hard enough finding a question in each category that you can correctly answer and the rules make the game even harder. The headquarter space rule is especially stupid in this version of Trivial Pursuit because the DVD questions are far easier than the ones on the cards. This basically makes the game into a roll-and-move game where the player who rolls the best wins. If your rolls suck, you are not going to win this game (even if you know trivia better than your opponents). Since our games take long enough as it is, we will not be playing by the official rules for future Trivial Pursuit games we play.

If you like Trivial Pursuit games, I think Trivial Pursuit: DVD Pop Culture is probably one of the better ones to get. It’s a very good value, cheap to buy online and easy to find at thrift stores for a couple dollars, and comes with a total of 3,000 questions (600 DVD ones and 2,400 card questions). The game also includes some very nice tokens (a lava lamp, Atari joystick, cassette tape, and phone). They are very, very nice. The only (small and nitpicky) problem I have with the game’s production is that the DVD questions take a bit too long to start. Every time you select a category, you have to see that category’s introduction (which takes about ten seconds to run). It’s fine to see each one once but after you’ve already selected that category, you should be able to just skip it. Trivial Pursuit seems to always take forever to complete and wasted time like this really adds up.