Just like the original game, “Trivial Pursuit Steal” involves answering trivia questions in six different categories (geography, history, science and nature, entertainment, art and literature, and sports and leisure). Unlike the original game, there are quite a few twists to the way the game is played (some good, others really bad).

To start the game, first make sure to clear off the center of the table for the stack of question cards, the draw pile, a discard pile, and a place for the “buzz card” where everybody can reach it easily. The draw cards are then shuffled and five cards are dealt to each player. The player to the left of the dealer starts. Every turn, the current player draws one card, plays one, then ends their turn.

A sample player hand (after the player drew their card at the start of their turn). This one includes three category cards, a wild, a double steal, and a block card (a very nice hand).

There are many different types of cards. There are single-colored cards that represent each category (blue = geography, yellow = history, green = science and nature, pink = entertainment, purple = art and literature, and orange = sports and leisure) which you can play to be asked a question in that category. If you get the question right, you lay it in front of you and you’ve earned that “wedge” or in this case card. If you answer incorrectly, the card is discarded and you do not earn that category’s wedge card. Either way, your turn is over. 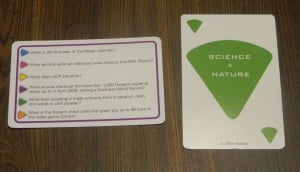 This player decided to play a green category card (science and nature) and will be asked the corresponding question on the question card.

There are also some more unusual cards. There is a “wild wedge card” which allows you to answer a question from the category of your choice. These cards are very powerful if you get the question right because you can use it to represent any color wedge card you want (even a different one than what you were asked to earn the wedge card in the first place).

There are also “steal cards” and “double steal cards.” As you might expect, they allow you to steal a wedge card from another player instead of earning it yourself. The double steal cards allow you to steal two wedge cards (either two from the same player or one each from two different players). Both cards end your turn without being asked a question. The only card that can stop a steal attempt is a “block card.” If somebody tries to steal your card during their turn, simply play a block card and you don’t have to give them your card (you draw a new card to replace it as well). Wild wedge cards cannot be stolen.

There is also another unique wrinkle to the game. In the center of the table, there will be a “buzz card.” Unlike regular “Trivial Pursuit,” “Trivial Pursuit Steal” gives you a chance to answer a question even if it isn’t your turn. You no longer have to sit around knowing the answer while the current player tries in vain to come up with the correct answer. Simply grab the buzz card (before the current player answers) and if the current player answers incorrectly, you’ll get a chance to answer it and get the wedge card. However, there is a risk to the buzz card. If you take it and answer incorrectly, the current player can take one of your already earned wedge cards (if you have one). The person asking the question is eligible to grab the buzz card but only after they read the entire question and before they look at the answer (obviously).

After a card is played and resolved, play continues clockwise. When one player has all six wedge cards (or a combination of regular wedge cards and wild wedge cards), they win. 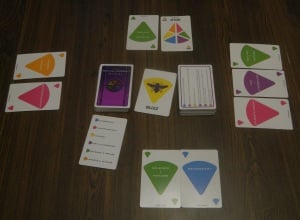 A sample game of “Trivial Pursuit Steal.” The cards on the table are ones already won by each player (the top player has a wild card which can be used as any color card).

As a fan of trivia but not usually a fan of most “Trivial Pursuit” games (most of the questions in the base games come from before my time or are from trivia areas I’m not great at), I think “Trivial Pursuit Steal” did a decent job of adding some new mechanics to an old game. However, while some of the changes are good there are some overpowered cards I wish wouldn’t have been included.

First of all, the good. The buzz card is a great addition that I will use whenever I play any version of “Trivial Pursuit” from now on. I have no idea how they never thought to include something like that before, it always stinks when you know the answer to a question but it isn’t your turn and you can’t do anything about it. This helps reduce some of the card draw luck that is a big part of the series (in a normal game you might know a subject really well but constantly get questions that you don’t know the answer to while other players get ones that you do know the answer to). It also reduces some of the downtime of the normal game since you aren’t sitting around waiting for the other players to answer questions until it’s your turn (you have an incentive to try to think of the answers to all questions asked). Finally, game play is quicker because there are situations where a player knows they have no idea what the answer is but don’t want another player to get a chance to grab the buzz card (instead of trying to dig the answer out of their brain for several minutes they might answer immediately to stop another player who knows the subject better). I hope “Trivial Pursuit” uses this rule in all future games they produce.

Another positive is the inclusion of wild wedge cards. While the all-around trivia master might not like this change (it evens the playing field quite a bit), it does help casual trivia players and quickens the game (I’ve played some games of “Trivial Pursuit” where we all struggled with certain categories and it wound up almost doubling the length of the game). The cards are a little too powerful as you can answer a question in whatever category you want, use it as whatever category you want, and it’s also immune from being stolen. I think less of them should have been included (there are 8 of them but there probably should have only been 5 or 6) and you should only be able to use two of them in a game.

I don’t know if it’s just me but the questions in “Trivial Pursuit Steal” seem a lot easier. This could be either a positive or a negative depending on your level of trivia knowledge. I’m guessing they only seem easier because the questions are more recent (and I was actually alive for most of the events referenced in the questions). One odd thing is that some of the questions don’t really seem to fit their category. For example, “How many spices make up allspice?” is a sports and leisure question for some reason. Shouldn’t that be in the science and nature category? There are several other examples of odd question and category pairings as well.

One problem with the game is the lack of questions. There are only 55 question cards included (for a total of just 330 questions). However, you could easily use question cards from other versions of “Trivial Pursuit” or just add the play cards to a regular game of it.

The big change I don’t like is the introduction of stealing. I know the game is called “Trivial Pursuit Steal” but that concept just doesn’t work well in a game that is basically a battle of knowledge. Also, it doesn’t help that it is way overpowered in this game. The fact that you can just steal other players’ hard-earned wedge cards instead of earning them yourself is an awful idea. In addition, there are far too many steal cards (five regular ones and two double steals) and nowhere near enough block cards (just two in the entire deck, I would have at least doubled the amount of them). I wouldn’t necessarily scrap the steal card concept entirely but I would have required the player trying to steal to at least answer a question correctly in order to steal the card (they wouldn’t get it if they answer incorrectly). The steal cards would still be more valuable and powerful than a regular card (since you hurt another player as well as helping yourself) but they wouldn’t be overpowered like they are in the actual rules. Adding the correct answer requirement and a couple more block cards would make them far more balanced.

“Trivial Pursuit Steal” adds some nice new mechanics to an old game. The addition of the buzz card and wild wedge cards are both solid mechanics that definitely add to the game. On the other hand, the lack of question cards (55 cards for just 330 questions is way too low, you could get repeat questions after just two or three games) and the overpowered steal cards are detriments to the game (though you could modify the steal card rules to give them less power). Ultimately, I decided to give “Trivial Pursuit Steal” a middle-of-the-road three out of five because I do plan to use some of the cards in all subsequent games of “Trivial Pursuit” that I play (especially the buzz card). However, the game has too few question cards to be considered a full game. I would consider it almost an expansion pack and because of that, I can’t give the game more than a three.