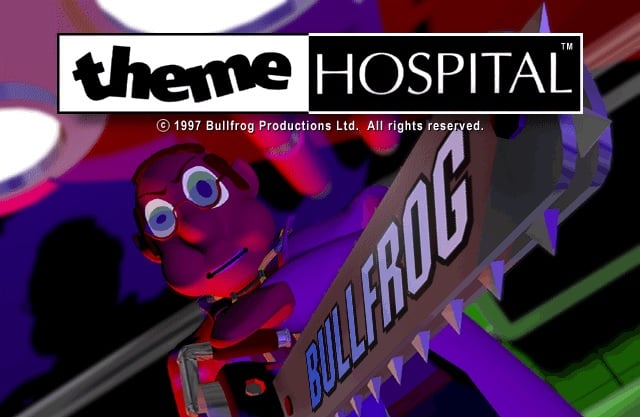 In Theme Hospital you take the role of a hospital administrator. To begin every level you take over an empty hospital building and build it into a real functioning hospital. You need to build the various rooms needed for diagnosis and treatment, hire staff, train staff, perform research, handle emergencies, cure epidemics, and deal with earthquakes. Throughout the game you will encounter strange diseases such as bloaty head and you may even encounter some aliens.

Like most simulation games, there isn’t a whole lot to the the story in Theme Hospital. The story boils down to building a hospital and raking in the cash. Theme Hospital is not the game you play for its’ story though so this isn’t much of an issue.

Back around 1997/1998 I remember playing Theme Hospital as a child. I absolutely loved the game and remember playing the game regularly. Unfortunately I was never able to beat the game. To this day I still own the original CD copy that I used to play but due to the game being quite old it has issues working on modern PCs. So I hadn’t played the game in a long time since the hassle of trying to get it to work properly was not worth it. Recently Origin made the “updated” version of Theme Hospital that works on modern PCs one of its’ “On the House” games meaning that I could relive one of my favorite games as a child for the low low price of free. I was hesitant to try the game figuring that it would let me down like so many things that I fondly remember from childhood. I was surprised that the game still stands up very well 18 years after it was first created.

When I was a child I found the game to be somewhat hard. I was around ten at the time but I just got stuck at this one level and I could never get past it. Playing the game now I have to say that the game is not very hard. I ended up never failing a single mission. In order to play the game well though you need to be willing to micromanage the entire hospital. If you don’t notice or ignore issues with your hospital you are likely to lose. These are a few tips that I feel are very helpful:

Overall I really liked Theme Hospital but there are some things that really started to bug me:

Back in 1997 the gaming world was first exploring 3d games and generally they looked terrible. Theme Hospital decided to stick with 2d graphics with an isometric design instead of venturing into 3d. Some of these older 2d games have held up quite well over the years. Some of the Super Nintendo and Genesis 2d games still look great today. I don’t think I would put Theme Hospital in that category. The graphics are not distracting but they also don’t hold up that well either.

I remember playing the game as a kid and being impressed with the graphics. For their time period the graphics were pretty good. As a kid I really liked the bloaty head patients. The characters were cartoony in design and did a good job supporting the fact that Theme Hospital was not a serious strategy game. The game has a unique sense of humor to it. The unique medical conditions are still interesting now even though I wish the game had a couple more conditions that you could heal. The game also under uses the alien patients. They only appear in the last two levels and only show up in emergency situations. I would have loved to have had aliens roaming the halls of my hospital.

One problem with the patients and staff are that there is not a whole lot of variety in the character designs. For each illness there is between one and three different character models. Combine that with the fact that every receptionist, handyman, and nurse look exactly the same. The doctors also almost all look the same except for their skin color.  Back in 1997 there probably wasn’t much room for more character models but it would have been nice if there were more options.

Another issue with the graphics that drove me nuts was the fact that you could not rotate the screen at all. This was probably a technical limitation of the time period but it is really annoying now with modern games. You will only ever be able to see your hospital from one angle. This makes it sometimes hard to design the hospital especially when you need to build something that is blocked by the wall that you can’t see through.

At the time of this review the game is currently free on Origin. If this is still true at the time you are reading this review, you have no reason not to pick up the game. If you never even end up playing the game you really aren’t out anything.

If the free offer on Origin has expired when you read this post, at $5 you are still getting a good deal. The game includes 12 levels. The early levels probably take 20-30 minutes while the later levels take several hours to complete. The game probably takes at least 15-20 hours to complete. If you are interested in the game you will get your money’s worth. The game also tends to go on sale regularly for around $2 so you could always wait for a sale and get an even better deal.

One problem I did have with the length is that the later levels tended to drag on. In the early levels you are generally still busy building the hospital when the winning conditions are met. In the later levels you generally finish building the hospital and essentially have to wait around until you accumulate enough cash to win the level. I know you can fast forward which could cut down on the wait time, but I never did since you need to be ready when some emergency comes up.

The other thing that I really wished that Theme Hospital had was a sandbox mode. A sandbox mode where you could keep building your hospital without worrying about winning conditions would have been great. I could have seen using this mode well after beating the normal “story” mode.

I loved Theme Hospital as a child and unlike most things it has actually held up very well over the years. The gameplay is not for everyone but it is fun and easy to play. The graphics have not aged well but they serve their purpose. At free or even at $5 you are getting a great deal for Theme Hospital if it is the type of game that you enjoy.

Now I just wish we could get Theme Hospital 2 (sadly it won’t happen since EA owns the license) or someone would actually make a good successor. I don’t count Hospital Tycoon

since it has pretty terrible reviews.