At the beginning of a player’s turn they roll the die. The player then takes the corresponding action based on the symbol that was rolled. 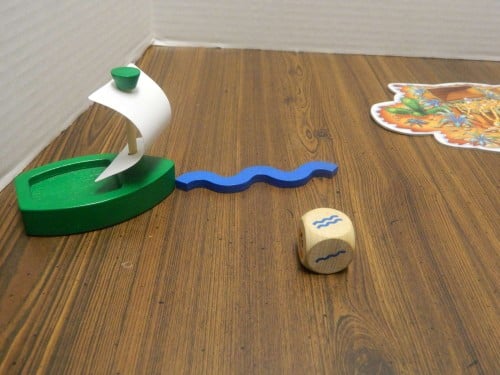 The player has rolled the double wave symbol which means they will use the medium sized wave for movement. The player places the wave so it touches the front of the boat. 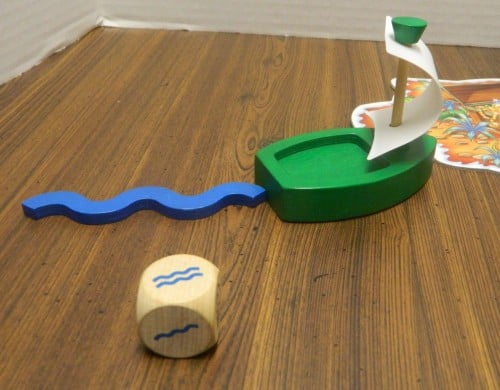 After the wave piece is placed, the ship is moved so the back of the ship touches the other end of the wave. 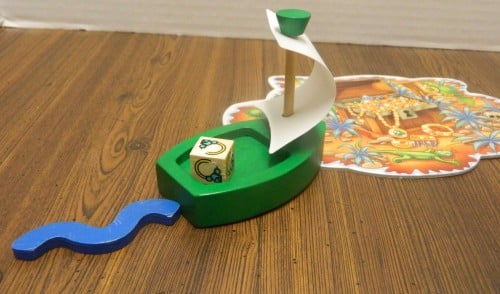 After moving the boat, it has reach the nearest island. The boat is turned around and the green player gets to take a jewelry treasure.

Ravensburger, a German board game and puzzle publisher, has been around for a long time. We at Geeky Hobbies have taken a look at several Ravensburger games. Ravensburger typically makes children’s games but does make quite a few adult games as well. What usually makes Ravensburger games stand out are the really nice quality components that come with their games. The quality of the components are actually the reason I looked at Treasure Hunt in the first place. I love wood components and outside of the island pieces, which are made of pretty thick cardboard, all of the pieces are made out of wood. The wooden boats in particular are really nice. If you like wooden components, you will really like Treasure Hunt’s components.

Unlike most roll and move games, Treasure Hunt doesn’t incorporate a traditional game board. Like several modern games (X-Wing), the game uses any playing surface as the game board. Instead of using spaces on a game board, players are allowed flexibility on how they would like to move by using distance markers to indicate how far a player can move their piece. This actually works to the game’s advantage since the game would have been a boring roll and move game if it utilized a traditional game board.

This does present a small problem though. In order to play the game as it was intended you either need a large table or you need to play the game on the floor. Treasure Hunt is the type of game that is best when it utilizes a large “game board”. If you play the game in a small area, the game will lose a lot of its’ charm since it will be very short. With a small area the game seems to end as quickly as it starts.

While it has a unique movement mechanic, it is still a young children’s game which means there is not much else to the game. The game is just way too simple for adults to enjoy. That is not surprising though since the game was made with five year olds in mind. The game doesn’t have any real strategy to it since while you have a lot of options on where you can move you ship due to there being no gameboard, your choice is actually quite obvious. You are always going to want to make a straight line path to the island you are targeting. As far as picking an island, you are going to just want to go from one island to the next in either a clockwise or counterclockwise fashion since this would be the most efficient way to gather all of the treasures.

Being a roll and move game means that luck will determine who wins the game. This is very true in Treasure Hunt. Rolling well will give you a distinct advantage. A player that rolls the medium and large wave will be able to move a lot farther than a player who keeps rolling the short wave. Since you really can’t mess up movement, this means that the player who generally rolls more medium and large waves will most likely win the game.

The only thing more powerful than the large wave is the pirate. If one player rolls a lot of pirates they will likely win the game. While this was just a pure coincidence, I found it odd how many pirates were rolled in the quick game that I played. Being on only one side of the die, the pirate should have only been rolled one in six times. The pirate was rolled a lot more than that in the game I played. The pirate mechanic is pretty much a guessing game where you have a 50/50 shot at guessing correctly. This makes it not much of a mechanic unless you are good at predicting what hand other people will hide their treasure in. Also being able to hide your own treasures well is a good skill in Treasure Hunt. If you know the other players’ tells, you are in a good position. In our game one player seemed to always know what hand the other people were hiding their treasure in while they were always able to hide their treasure so no one was able to steal from them. Not surprisingly that player ended up winning the game. I felt the pirate mechanic is too strong since it can cause large swings in the game because stealing a treasure can help the player significantly reduce the amount of traveling that they have to do.

Treasure Hunt is a children’s game through and through. The game is simple to learn and easy to play. With its’ great components and interesting theme, I think younger children will like the game especially if the theme appeals to them. Unfortunately the game is way too simple for anyone else (except maybe for parents of young children) which makes the game pretty boring. For a younger audience I could see the game’s rating being significantly higher than the rating that I gave the game. If you have young children you should maybe consider picking up the game. If you don’t though I would avoid the game.