Have you ever played a game like Hi-Q where the object of the game is to systematically get rid of one peg at a time by having one piece jump over another? I remember playing Hi-Q when I was a young. I remember enjoying the game despite never being able to clear all of the pegs. I usually ended up with two or three pegs left on the board at the end of the game.

I bring this up because the game Cool Moves plays very similar to those old games like Hi-Q and Solitaire. The only real differences between the games are the fact that the board in Cool Moves is smaller than Hi-Q and in Cool Moves a lot of the puzzles begin with more than one empty space on the board. So let’s take a look at how Cool Moves is played.

Cool Moves includes 40 different puzzle cards. Each card features a picture of the game board with some pictures of penguins. To set up the puzzle, place a penguin piece on the corresponding spaces on the game board. The objective of each puzzle is to eliminate all but one of the penguins one by one. 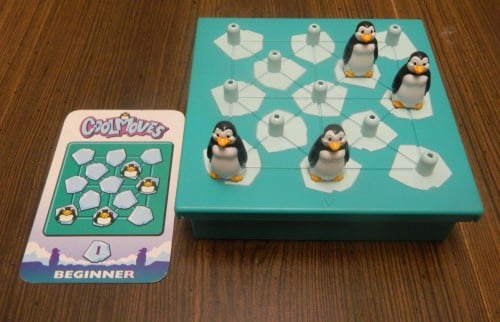 Before beginning a puzzle you must set up the board according to the picture on the puzzle card.

The basic movement in Cool Moves involves one penguin “jumping” over another penguin. A penguin can jump over an adjacent penguin as long as there is an empty space on the other side of the penguin that is being jumped over. The penguin that was jumped over is removed from the board. A penguin can only jump over one penguin at a time. Penguins may only move to an empty space by jumping over a penguin in one of the directions indicated on the board. 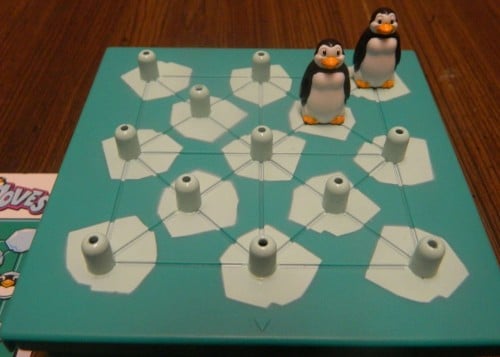 The player has made multiple “jumps” in this puzzle. The player can have the penguin in the top right corner jump over the other penguin to reach the center space.

If a player is able to move the penguins around so there is only one remaining, the puzzle was solved and a player can attempt a new puzzle. 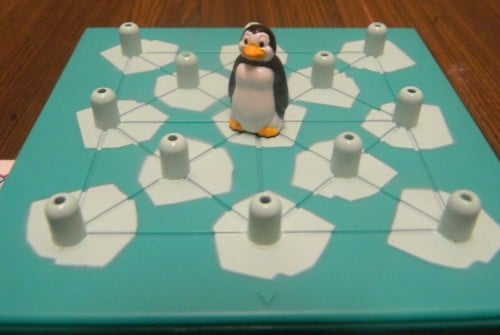 As I have already mentioned, when I was a kid I enjoyed playing Hi-Q. I also had fun playing Cool Moves. The game is simple to learn and play. It is the type of game that you would only want to play in short doses though. I don’t see it as a game that you would want to play for more than 30 minutes at a time. After playing some puzzles I started to bore of the game and had to put it away for a while and come back to it later. At about the 25th puzzle I started to get bored with the concept of the game and it will probably be quite a while before I pick up the game again.

The repetitive nature is the biggest problem that I had with Cool Moves. Every puzzle is essentially the same except for a different arrangement of penguins at the beginning. The gameplay never changes and a lot of the puzzles are very similar with only a couple of the penguins being in different locations. Since the game doesn’t really change from puzzle to puzzle, I find it hard for someone to want to play the game for long stretches of time. The game plays better if you play it for a short time and then come back to it at a later date.

Overall I would consider Cool Moves to be a light to moderate strategy puzzle game. The game is very simple to play with just a couple of rules that children should not have much trouble understanding. I would consider the beginning and intermediate cards to be quite easy. Most of these cards I was able to solve within the first couple attempts. It feels like these cards are just warmups for the main part of the game which are the advanced and expert cards.

The first half of the advanced cards are challenging but are still pretty quick to solve. Around the mid point of the advanced cards, the difficulty spikes quite a bit. Puzzles begin turning into trial and error scenarios where players need to systematically go through all of the options for a particular puzzle.

The big spike in difficulty is unfortunate because I think the game could have used more cards in the moderate difficulty level. About half of the cards are too easy while the other half of the cards are too hard. The hard puzzles are frustrating in particular since they pretty much become a systematic process of going through all the different combinations. While some people may enjoy this type of strategy, I find it to be kind of boring.

Since each puzzle is set up differently, there is no definite strategy that will solve all of the different puzzles. Here are a couple strategies I developed that helped me solve quite a few of the puzzles though.

Overall I was impressed with the components for Cool Moves. I like that the game board serves as a travel case. Cool Moves would work well in a car or other traveling situation. All of the pieces nicely fit into the tray on the bottom which makes it easy to move while not having to worry about losing pieces. The quality of the penguin pieces are also very nice. The game could have easily just used bland pegs and it would have had no impact on the gameplay itself. Instead the game includes some detailed penguin pieces that add some theme to a game that otherwise would have had none. The cards do a good job making setup easy and providing the solution if you get stuck. I would have preferred more cards (who wouldn’t) and I wish the game had more moderately difficult cards.

Overall Cool Moves is a pretty average puzzle game. At first the concept behind the game is fun and should appeal to fans of puzzle games. Cool Moves is not the type of game that you would want to play for long stretches of time though. After a while it gets kind of boring since you are essentially doing the same thing in all of the puzzles. The puzzles in Cool Moves also tend to suffer from being too easy or too hard.

Basically if you like the Hi-Q style of gameplay, eliminating pieces by jumping pieces over each other, you should like Cool Moves since it is very similar to Hi-Q. If you either don’t like Hi-Q or puzzle games in general, there is probably not a whole lot for you in Cool Moves.

Is there any way to replace the cards.. I am missing number 13. Thank you

As far as how to replace the cards I think you could either search Discovery Toys website to see if you could order replacement cards or you could purchase another copy of the puzzle. Otherwise in my previous comment I outlined what is on card #13 if you just want to make you own copy of the card.

How do I replace the cards. I just got this game from a thrift store and it is missing card number 13

I don't know exactly how you can get replacement cards but I can tell you initial setup and the answer for card 13.

To start the game the penguins are located as follows:

The solution is as follows: