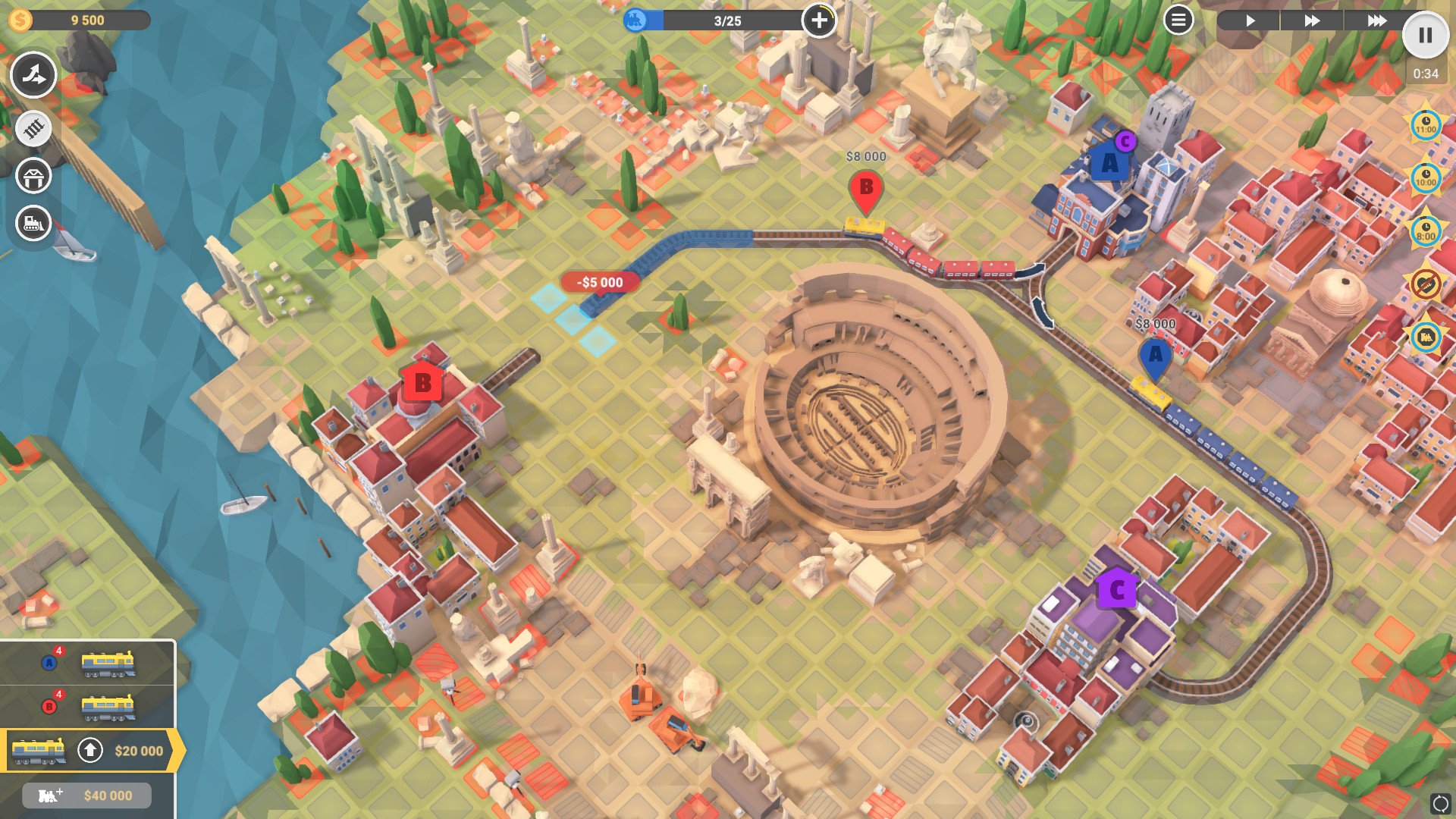 Train Valley 2 Passenger Flow is all about the addition of passenger trains. Instead of focusing on delivering goods between stations and factories, Passenger Flow adds a mechanic where you are have to transport passengers from one station to another. At the beginning of each level you are tasked with delivering a certain number of passengers between specified stations. Each of the stations in this new mechanic feature a colored letter. Based on a timer passengers will arrive at one of the stations with a destination station. You have to guide these passengers to their destination station without crashing into another train. Passengers will show up at regular intervals or you can press a button to have the next passengers arrive immediately. You can get the passengers to their destinations in any order as there is no time limit to deliver a train to its destination.

The only time limit for delivering passengers comes from the fact that you can never have two passengers wait at the same station. The passengers are distributed between all of the stations before a second appears at any of the stations. Once the second waiting passenger arrives at a station though the passenger train that was already waiting will be dispatched whether you are ready for it or not. This creates a lot of the gameplay that is added in Train Valley 2 Passenger Flow. You need to manage the different stations to make sure passengers are regularly dispatched so there isn’t a backlog which will send trains out randomly. You can leave passengers in stations for quite a while but you don’t want there ever to be one or zero unoccupied stations as you are treading dangerous waters. You need to keep monitoring the situation to make sure you keep up as new passengers are added to the stations.

The first couple of missions in Train Valley 2 Passenger Flow focus on this new mechanic. The game then starts to mix in the main mechanics from Train Valley 2. In addition to handling passenger trains, you need to dispatch trains to create goods like in the main game. While I liked the passenger mechanics, on their own the levels can be pretty easy as you can deal with the trains quicker than the passengers show up. These missions are mostly used to introduce the new mechanics, but the only real challenge is whether you can five star the missions which is not even that difficult. Once you add in the mechanics from Train Valley 2 though the DLC really starts to shine.

The main reason that I really liked Train Valley 2 Passenger Flow is that it adds a really interesting new dynamic to Train Valley 2. You now have two things that you have to keep track of at any given time. Like the base game of Train Valley 2 you need to transport goods between stations and factories in order to produce and deliver goods. At the same time you have to take care of the passengers as you don’t want them to back up leading to a train being sent out that you weren’t prepared for. You need to juggle these two mechanics as you can’t neglect either of them. If you ignore the passengers you will have to deal with trains randomly getting dispatched which can mess with your plans or cause crashes. You can’t ignore the manufacturing element of the game either as you will lose precious time if you don’t keep the factories running most of the time.

The gameplay in Train Valley 2 Passenger Flow seems to break down as follows for most of the levels. At the beginning of the levels you generally aren’t given enough money to focus on both the passengers and the manufacturing. Thus you are better off focusing on delivering passengers to begin with as they will give you money you need to build the tracks to connect to the factories. If you start with the factories you are going to have a hard time having enough money to place the passenger tracks before trains begin to be dispatched. Once you have set up your tracks to the factories you will then have to start switching your focus between the goods and passengers. You will spend some time getting goods to the factories that are needed to get them running. As they are creating goods you can then turn your attention to delivering the passengers. Having to regularly shift between the two mechanics keeps you on your toes as you regularly have to multitask and keep track of a lot of things at the same time.

I think the reason why I liked Train Valley 2 Passenger Flow so much is that it does exactly what a DLC for this type of game should do. I would have been happy with just more levels, but it adds a whole new mechanic to the game. The mechanic doesn’t drastically change the main gameplay. Instead it augments it to make it better. The passenger trains add another thing to the base gameplay that you need to keep track of. I could see some people not loving the DLC addition as it forces you to keep track of more things which could be stressful for some players. I really liked the addition though because it adds another dynamic to the game. In addition to making sure you deliver the necessary goods to the right stations/factories efficiently, you need to balance that with delivering enough passenger trains that you don’t fall behind and have trains leave the stations on their own. Train Valley 2 Passenger Flow is a worthy addition to the original game as it doesn’t drastically change the gameplay but still improves upon it.

While I loved Train Valley 2 Passenger Flow I do have one small complaint which deals with the length. Train Valley 2 Passenger Flow adds 20 additional levels to the game. Some of the earlier levels may take ten or less minutes but a lot of the missions seem to take 20-30 minutes. Overall the length for the DLC is not bad as I would expect you to get at least 6-8 hours out of it if you complete all of the levels. I don’t have a huge problem with there only being 20 levels. I just wished there were more levels because I really enjoyed them and wish there were more to play. The good news is that the new mechanics can be used to create levels in the level editor so I hope to see some great new levels created by the community.

Train Valley 2 Passenger Flow is basically what you want from DLC. It doesn’t drastically change the original game but it expands and improves upon it. Basically Train Valley 2 Passenger Flow adds the mechanics from the first Train Valley into Train Valley 2. There are new stations in the game which give you passengers that you have to transport to the other passenger stations. You need to transport them quickly though because if you have too big of a backlog the trains will depart themselves creating potential problems that you have to handle before they crash. This new mechanic is combined with the gameplay from the main game forcing you to balance both priorities to be successful. I thought this was a great addition to the game as it adds an interesting new mechanic without impacting what was good about the base game. I could see some people finding the new mechanic a little overwhelming though as you have to keep track of quite a few things at a time. The DLC also only has twenty levels which is a little disappointing mostly because I just wanted more levels to play.