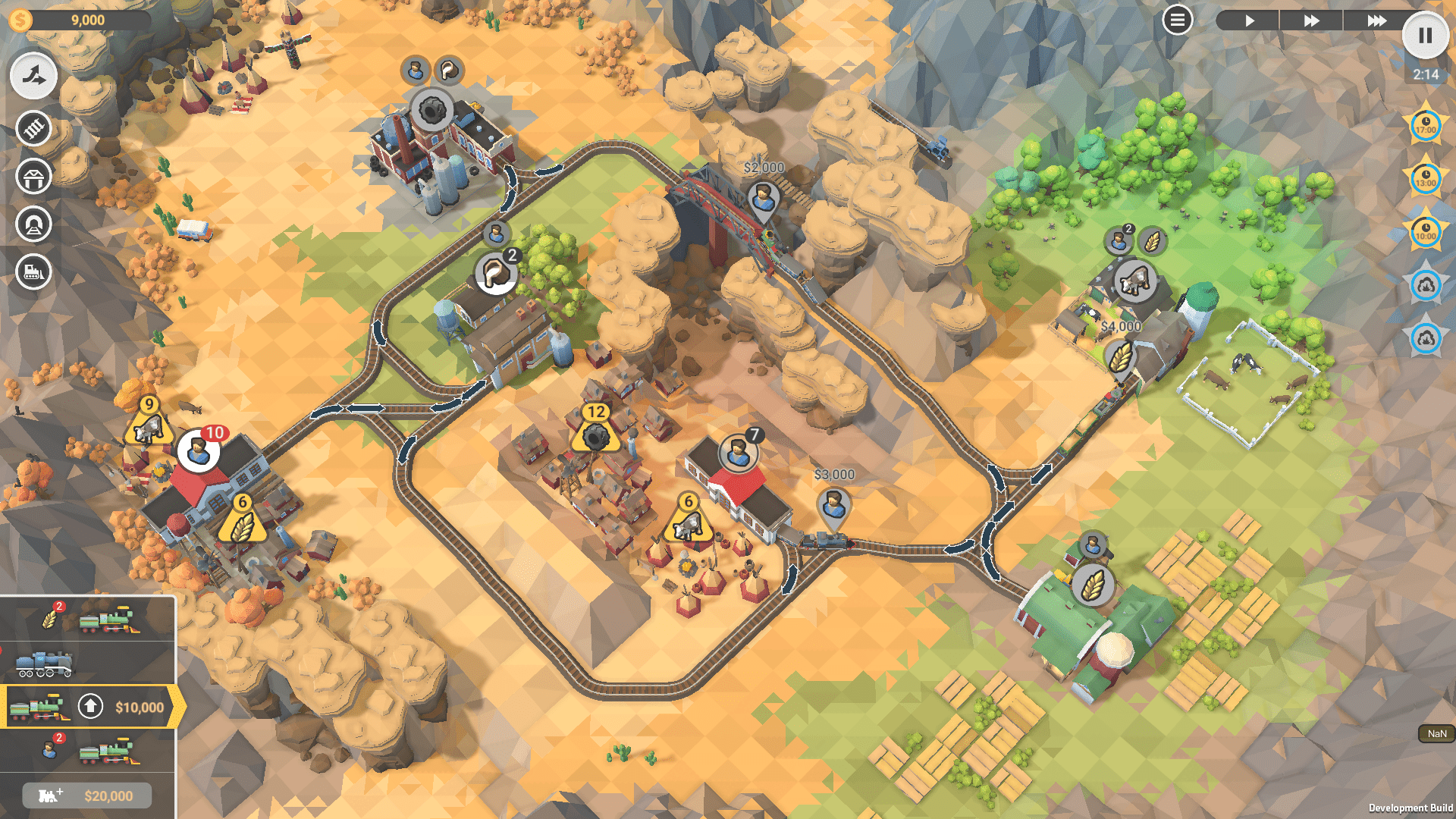 We at Geeky Hobbies would like to thank Alexey Davydov, Sergey Dvoynikov, Timofey Shargorodskiy and Flazm for the preview copy of Train Valley 2 used for this review. Other than receiving a free copy of the game to preview, we at Geeky Hobbies received no other compensation for this preview.

For those of you who never played the original Train Valley, here is a quick recap. In the game you are in charge of a train company. You are given different train depots which you have to connect by building tracks between them. You need to use those tracks to guide different colored trains to their corresponding stations. You need to create an efficient set of tracks to get trains to their desired stations without crashing into one another or entering the wrong station.

In the original Train Valley trains randomly appear in stations and you have to prioritize which trains to move first. If you took too long to move a train, it will leave the station on its own. This creates problems as you might already have another train moving on that track. I really enjoyed this mechanic as it was fun trying to manage all of the trains popping up all over the map. The one complaint I had with the mechanic is that since the game was kind of randomized, you needed luck to be on your side in order to do well in a level.

In Train Valley 2 the trains no longer randomly appear on the map. You are given access to a fleet of trains (which you can expand and upgrade). The goal in each level is to provide the required amount of resources to one or more cities. Each city provides you with workers which you will use in order to make goods to bring back to the cities. For example a city needs some wood. You send a train from the city (filled with workers) to the sawmill. When the workers arrive they are used to create wood. You can then send a train from the sawmill back to the town to deliver the wood. This is a very simplified example as you eventually will have to take that resource and refine it even further at another station. Sometimes you will even have to combine several resources together to create the finished product.

When I first started playing Train Valley 2 I was somewhat surprised as it was not exactly what I was expecting. I thought the game was going to basically be the same as the original with some polish, new levels, and maybe a couple new mechanics. To be honest I would have been fine with this since I really enjoyed the original game. It took a while to get adjusted to the new gameplay but I have to say that Train Valley 2 exceeded my expectations by quite a bit.

What I really like about Train Valley 2 is that it took a fun mechanic from the original game and developed it further into an even better game. I really like the resource management aspect of the game. You are given a limited number of trains and money in order to build your train system. You usually don’t have enough money to build your entire system at the beginning of a level so you need to make money in order to expand. You begin most levels creating some of the simplistic components which gives you money to build tracks towards the other stations in the level. In addition to money, you also have to manage your trains and tracks that run through congested areas. You need to find the bottleneck areas in your system and make sure that these areas are always in use if you want to minimize the amount of time it takes to beat a level.

In general Train Valley 2 is not a difficult game. Unless you really mess up, I don’t think it is possible to actually lose a level. There is no time limit for a level and unless you destroy all of your trains I can’t see you ever running out of money where you can’t eventually finish a level. Train Valley 2 balances this though by giving players stretch goals in order to try and do as well as they can in the game. Each level has five stars that you can acquire based on how well you do in the level. These stars aren’t needed to progress in the game but they give players something to strive for. I love how Train Valley 2 creates difficulty since it can work for everyone. If you want a laid back experience you can take as much time as you want to finish a level. If you want a challenge though you will be challenged to acquire all of the stars in every level.

Two of the stars in each level are given for accomplishing certain tasks. For example you could get a star if no trains crash or enter the wrong stations. I really like these stars as they usually reward you for avoiding mistakes in the game. I do question why in some levels you are rewarded for having trains crash into one another or making other mistakes. In general these stars are pretty easy to acquire if you are paying attention to them throughout the level.

The other three stars in each level are tied to time limits. These are the stars that are the hardest to acquire in each level. Usually you are not going to have much trouble acquiring the first star as the game gives you enough time where you should finish with plenty of time unless you show no urgency at all. The second star is also not that difficult in most levels. The game gives you a little extra time where you don’t have to be fully optimized but you can’t make a lot of mistakes. Acquiring the third time star in most levels can be quite challenging though. Most of the levels give you very little leeway in order to finish in time to acquire all three stars. You have to have a great plan and work extremely efficiently in order to get the third star.

While Train Valley 2’s artwork may not be for everyone, I love the game’s low-poly graphic style. There is something that I have always liked about this graphic style. The game might not look lifelike but the game looks great and has its own unique style. The game includes a lot of little details in it that have nothing to do with the actual gameplay but they bring character to the game.

With Train Valley 2 being an early access title I knew the game was gong to be a little limited on the content side and yet I am not that disappointed in that area either. Currently the game has 20 different levels with the goal of including 50 levels once the game leaves early access. While I wish all 50 levels were available right now (since I don’t want to wait to play them), for an early access game 20 levels is still pretty good. Based on the levels that I have been able to play so far I would say that most take around 10-20 minutes. Even if you don’t replay any of the levels I think you could still get at least 4-5 hours out of the game. If you want to five star the levels, I could see you getting quite a bit more time out of the game. Once the game leaves early access, in addition to the 50 levels it is supposed to have a level editor which could add who knows how much more content to the game.