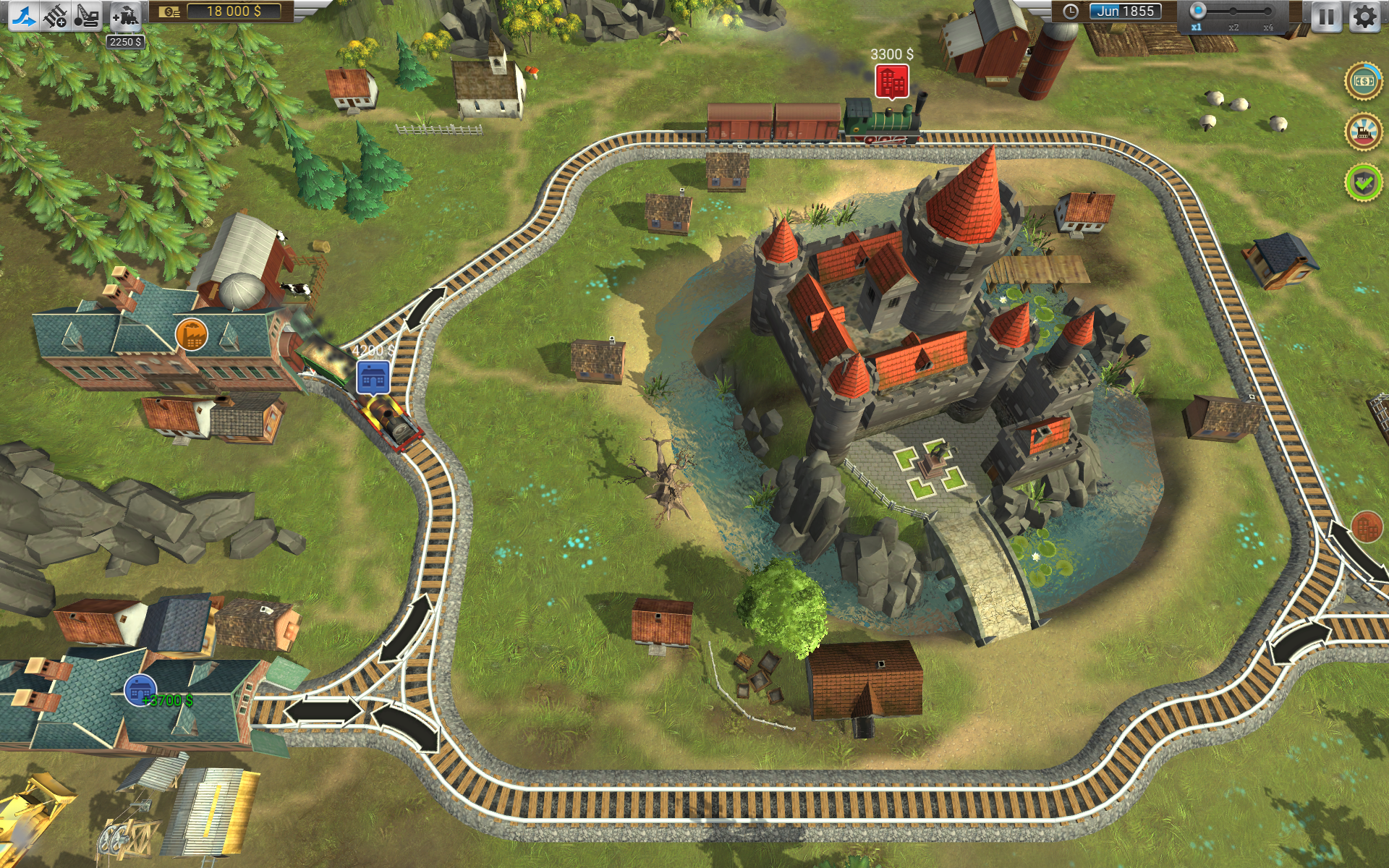 
In Train Valley you control a railway. At the beginning of each level you are given some land and some train depots that you must connect. You lay out track by clicking and dragging to the location you desire. While laying track you need to be careful to connect the tracks properly so all of the trains can reach their destinations. You also want to try and avoid building over buildings and other obstacles since it increases your cost to build the train.

While building your train routes, you will be tasked with guiding the trains to their desired location. You dispatch waiting trains from depots (or they will dispatch themselves if you wait too long) and you then have to switch the arrows on your tracks to make sure the trains follow the right path to their desired destination. You will eventually have to handle multiple trains at the same time making sure they don’t crash into one another. While you want to take your time, you have to keep the trains moving because your business can go bankrupt if you run out of money.

While Train Valley might not be for everyone, I have to admit that I quickly became addicted to the game. I don’t know what it is about the game but Train Valley is one of those type of games that you will keep telling yourself just one more level and then a couple hours have gone by. You wouldn’t think that you would want to play such a simple puzzle game for so long but I routinely played the game for two hours or more at a time and the time just flew by.

When you first look at Train Valley you might not think there is much to the game. All you do is build railroad tracks and direct trains to their destination. The fun and enjoyment in the game comes from juggling all the different trains and building tracks that can handle multiple trains at the same time. In the first couple of levels you can build a simple track layout and only have one train out at a time. That simplicity goes away quickly as you will soon have to juggle multiple trains at the same time while preventing them from running into one another. The game has a pause button and you can stop trains at any time but it is still surprisingly challenging maintaining all of the different trains at the same time.

While Train Valley can get kind of hectic at times (especially in the last levels) the game is still surprisingly relaxing. While there is strategy and thought required to do well in the game, Train Valley is not a brain burner puzzle game. Train Valley even has the sandbox mode where you can’t lose so you can just build track and direct trains to their destinations. Add in the mellow music and the charming artwork and Train Valley is a really relaxing experience. Train Valley is the perfect puzzle game to play when you just want a little time to just sit down and relax.

On the difficulty spectrum I would call Train Valley an easy game that is hard to master. While you won’t breeze to victory in all of the levels, you should be able to beat most of them (except for maybe the last levels) if you don’t make a huge mistake. The game is really simple since the only controls in the game are clicking and dragging. The challenge in Train Valley comes from the extra objectives in each level. It is pretty easy to beat most of the levels by avoiding bankruptcy until the end of the level. It can be quite a bit more challenging to complete all three additional objectives in a level. Especially in the last levels you need to have almost perfect time management skills in order to complete all three additional objectives in a level. If you are a completionist you are going to have a challenge getting 100% in every level.

For a puzzle game you can get a lot of playtime out of Train Valley. Train Valley has both a campaign and a sandbox mode. In the campaign mode you need to avoid bankruptcy and try to complete the additional objectives. In the sandbox mode there are no time or money limits so you are able to play without any stress of losing. Both modes include 24 levels which should take 6-8 hours to complete. If you don’t care about completing the additional objectives it should take you around six hours while it will take around eight hours if you actually try to complete as many of the challenges as you can while beating the levels. If you want to 100% all of the levels it will probably take you at least ten hours to complete. Outside of repeating levels there is nothing else to do once you complete all 24 levels but unlike a lot of games I actually think I will go back to try and 100% as many of the levels as I can since I enjoyed the game so much.

While I really enjoyed my time with Train Valley I did have a couple small issues with the game. First while the game occasionally adds a couple small new mechanics, after a while the game feels like more of the same. If you like the game’s basic mechanics there really isn’t a problem but if you were hoping that more mechanics would be added you will be disappointed. While I really enjoyed my time with the game, I wish there was a little more variety in the game.

The other complaint is that it is hard to keep track of all of the trains in the stations at the end of the game. In the early levels it is really easy to keep up with all of the trains that are waiting in the stations since you can usually dispatch them shortly after they arrive at the station. This is not possible for the later levels since you have so many train stations to deal with and trains arrive quicker than you can get rid of them. Since you are so busy actually directing the trains, you can’t keep track of when the trains arrive. This means that you can’t prioritize which trains you have to move next to avoid having them leave the stations themselves. This leads to problems in the later levels as trains keep leaving stations and you have a hard time controlling all of them. I really wish the game had some way of indicating which trains were closest to leaving since the only warning the game gives you is when a train is five seconds away from leaving which is too late to plan what to do with it.