In Toby The Secret Mine you play as Toby. A stranger invades Toby’s village and kidnaps most of the villagers. Toby decides to chase after the mysterious figure in order to try and rescue his fellow villagers.

Toby: The Secret Mine is a pretty typical puzzle platformer. A lot of the gameplay involves jumping over and otherwise avoiding hazards as you try to reach the end of the level. A lot of the platforming requires you to take advantage of the environment in order to avoid obstacles. The game also has the occasional puzzle that you need to solve in order to progress. Most of these puzzles have clues hidden throughout the level to give you help.

In addition to finishing each level there are over twenty villagers that you can save throughout your journey. Most of these villagers are hidden or placed in locations that require additional puzzle solving in order to reach. The game includes 21 levels (maybe more if you save all of the villagers). 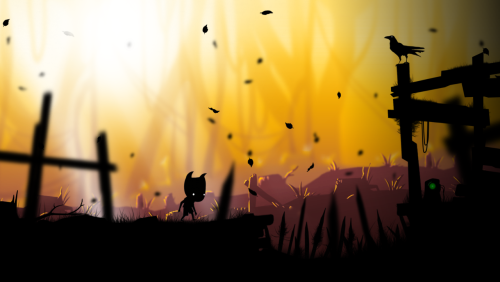 The platforming/puzzles are not particularly original either. Quite a few of the puzzles are well designed but I don’t recall any parts of the game where I said to myself that I have never played a puzzle like this before. For the most part the game takes elements from other puzzle platformers and does a good job implementing them in the game.

Other than not being highly original and being pretty short (more on this later), Toby: The Secret Mine is actually a pretty good puzzle platformer. While I wish Toby would run faster (he is soooo slow at times) the controls work well for the most part which is crucial for a platformer. Most of my deaths in the game were due to my errors and not the controls. Most of the platforming sections are pretty straightforward but the game does have some clever puzzles that make use of the environment.

The more traditional puzzles are a little more hit and miss. Most of these puzzles give you hints through the level but outside of a couple of puzzles they are really easy to miss. None of the puzzles are that complicated though so you can usually guess your way to the answer. Some of the puzzles/platforming sections require trial and error though as you need to just guess what you are supposed to do next and if you are wrong you just do the opposite.

When I first started playing the game I have to say that I was a little disappointed with it. The beginning of the game is pretty paint by the numbers and was kind of dull. As you progress though the game keeps getting better. The last levels in particular are some of the best in the entire game. If the early levels were as good as the late levels the game would have been considerably better overall.

Having played a lot of puzzle platformers this might be skewed a little but I didn’t find Toby: The Secret Caves to be that difficult. The game is moderately difficult. You might die quite a few times but the game isn’t difficult like frustrating platformers since the game relies more on figuring out what you have to do in a particular situation rather than having perfect timing. The game has plenty of checkpoints in each level which means each death doesn’t make you replay a lot of content. While I haven’t played Limbo in several years I would say that Toby: The Secret Mines is around the same difficulty level.

As I already mentioned, Toby: The Secret Mine is not a particularly long game. The game appears to only have 21 levels (unless more unlock after you go back and save all of the villagers). I finished the game in a little over three hours while collecting a majority of the villagers. While that is not terrible it also means that Toby: The Secret Mine is kind of short. Being mostly developed by one designer that is to be expected though.

With a retail price of $9.99 your decision on value will come down to how much length matters to you. Toby: The Secret Mine is a pretty good puzzle platformer. If you like puzzle platformers you should enjoy the game quite a bit. If length is important to you though you may want to wait for a sale.

Should You Purchase Toby: The Secret Mine?

Toby: The Secret Mine is a pretty good game. Although it is kind of short and not highly original, the game has a lot going for it. I had fun with the game. The art style is great. Most of the puzzles and platforming sections are well designed. If you like puzzle platformers and liked Limbo (I personally thought Limbo was better) in particular I think you will enjoy Toby: The Secret Mine quite a bit.