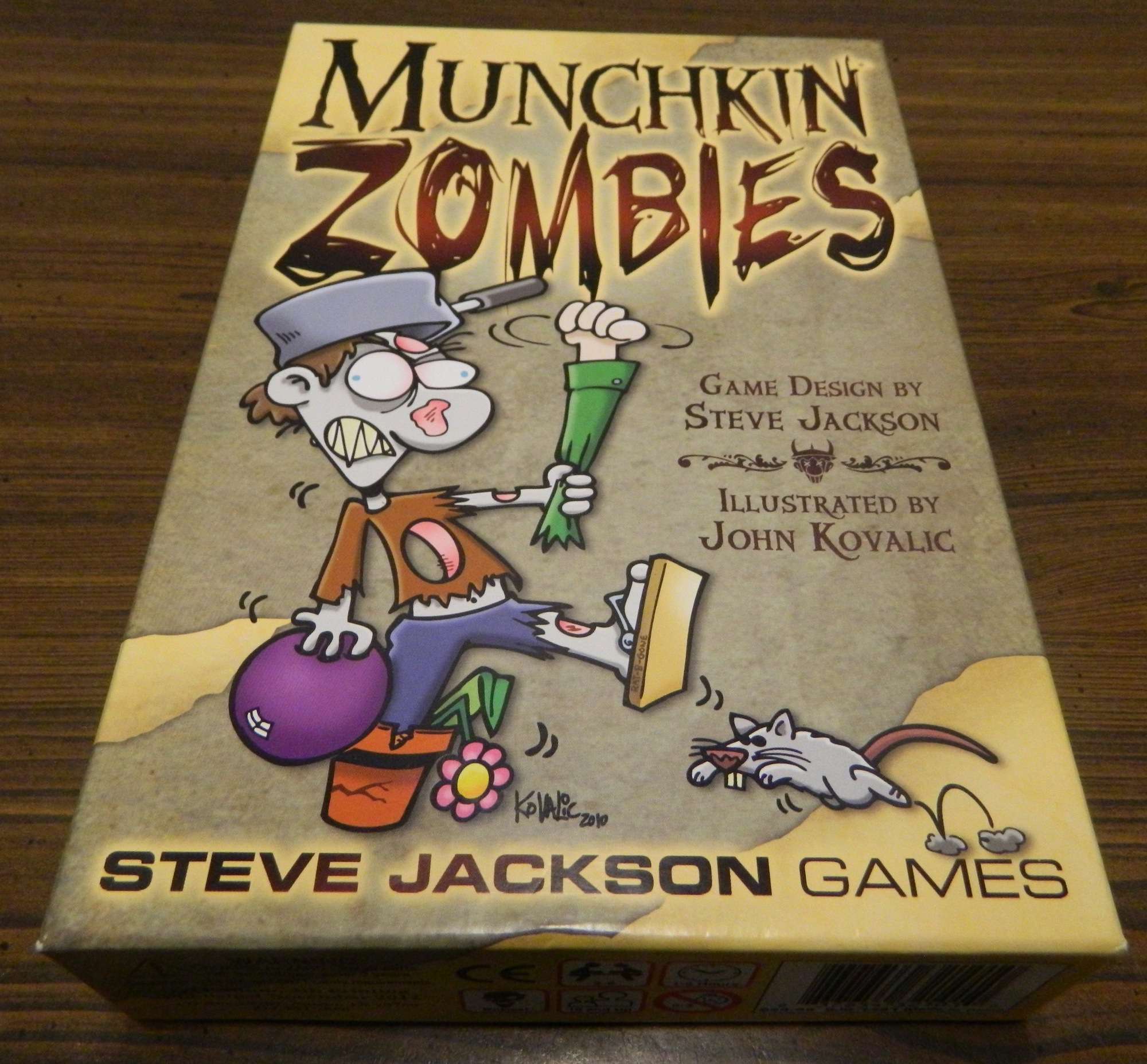 Note: For those of you who played other versions of Munchkin, Munchkin Zombies plays pretty much the same so you would only have to reference the sections that apply specifically to Munchkin Zombies.

Be the first player to reach level 10 by killing a monster.

For the standard edition of the game you will need to find your own markers to indicate each players current level. The deluxe version includes a board that you can use to indicate what level each player is. Each player starts the game at level one.

Sort the cards into door and treasure decks. Shuffle both decks separately and deal four cards from each deck to all players.

Players choose who gets to go first and play moves in a clockwise manner.

Players can play as many item cards out in front of them as they want except that they can only have one “big” item in front of them at a time (unless you play a card lets you carry two). Players can only have one head, armor, and footgear item equipped at a time. A player can either equip one two-handed weapon or two one-handed weapons. All other item cards played out in front of a player should be turned sideways to indicate that their effects do not apply in combat.

At any time during your turn you can choose to sell items from your hand and/or in front of you in order to gain levels. For each 1,000 gold worth of items you sell you gain an additional level. If you sell 1,900 gold of items you only gain one level and you receive nothing for the extra 900 gold coins. You can gain as many levels as you want through selling items. You can not sell items to reach level ten though.

Unless a player has played a double mojo card, each player can only have one mojo card in front of them at a time. Each mojo card gives players a special ability and also allows a player to equip cards pertaining to the mojo. Mojos can give monsters bonuses against you. If at any time you want to discard your mojo you can (even in combat).

If not drawn during the Kick Open the Door phase, a curse card can be played at any time. A player can play the card against any other player and its’ effect comes into play immediately. If drawn during the Kick Open the Door phase it is applied to the player who drew the card. The curse stays in play until the conditions of the curse have been satisfied. If a curse can affect multiple things, the victim gets to pick which thing is affected.

When you are done playing, switching, trading or selling cards, you draw the top card from the door deck and turn it face up. If it is a monster you must fight it immediately (see Fighting section). If the card is a curse it is applied to you and you must perform the actions printed on the card. If any other type of card is drawn you can either play it immediately or add it to you hand.

If you didn’t draw a monster when you kicked open the door, you can choose any monster card from your hand to fight. If you have no monsters in your hand or choose not to fight one, you don’t have to.

If you didn’t fight a monster in either of the two previous steps you take the top card from the door deck and add it to your hand. You cannot play it during this turn.

If you have more than five cards in your hand you must either play enough to get below five or you must donate enough cards to get down to five cards. When donating cards (you get to pick which cards) you must donate them to the player who is the lowest level. If two or more players are tied for lowest player you must divide up the cards as evenly as possible but you get to choose who gets what. If you are the lowest level or are tied for lowest you can just discard your extra cards.

When you encounter a monster in either the Kick Open the Door or Look For Trouble step, you must fight them. The winner of combat is determined by who has the higher combat strength. The monster’s strength is equal to the number printed on the card plus or minus any special effects printed on the card. A player’s strength is equal to their level plus or minus all cards played in front of them.

If your combat strength is higher than the monsters, you win the fight. You gain one level or two if specially mentioned on the monster card. You also get to draw the amount of treasure cards printed on the card. If you play a card to get rid of a monster without killing it you don’t get the level(s).

If you are about to lose you can ask another player for help (see Asking For Help section). If you can’t get your combat strength high enough to defeat the monster(s) you will have to run away. You will get no level(s) or treasures for facing the monster. You roll the die. If you roll five or better (after modifiers) you escape unharmed. Otherwise you are caught and have to face whatever is printed in the “bad stuff” section of the monster card. If a player tried to help you and you failed as a team you both roll separately to determine if you escaped. If you are running away from multiple monsters you have to roll for each monster.

If you can’t win a fight by yourself you can ask the other players to help you. You can ask any/all of the players to help you but they can refuse.  Only one player can help you in each fight. Since your opponents are unlikely to help you willingly, you will probably have to bribe someone to help you. You can offer another player any item cards in front of you or any number of the treasure cards that you would receive from killing the monster. You must decide before fighting who gets to pick first from the treasures that are won if you offer treasures to another player. You cannot offer levels to the player to help you in the fight.

If you die you lose all of the items played in front of you. You get to keep your mojo(s), a double mojo card, power(s), your level and any curses affecting you. When you die you lay out all of the cards from your hand and each player gets to take one card of their choice starting with the highest leveled player. The rest of your cards are discarded.

The first player to reach level ten by killing a monster will win the game.

If I had only a couple words to describe Munchkin Zombies, they would be “more of the same”. If you have played Munchkin before you know what to expect out of the game since outside of a theme change, different cards, and some slight changes to the rules Munchkin Zombies plays just like the original game. Munchkin seems to have a love/hate relationship with a lot of gamers. A lot of people love the games (there wouldn’t be so many expansions if they didn’t) while others have no idea why the former likes the game so much. While I don’t love the game, I would put myself closer to the first group.

The first thing that always sticks out about Munchkin is the artwork/theme. While some people don’t like the artwork, I like the cartoony artwork of Munchkin. The theme of each Munchkin set mostly involves making fun of the theme of the particular set. For example Munchkin Zombies’ theme is mostly about making fun of zombie cliches. The theme combined with the artwork and the text on the cards leads to some genuine laughs.

The gameplay in Munchkin is also pretty clever. While some people will say that Munchkin is a stupid card game, I think it is clever since it does a good job blending strategy and simplicity. Munchkin is not the simplest card game in the world but once you get a hang of the mechanics the game is easy to play. The different abilities of the cards give you a lot of flexibility since you can combine different cards together in order to give yourself a significant advantage or really hurt one of your opponents.

Some of the cards do have a lot of text though so Munchkin isn’t going to be for everyone. Players that don’t like card games where you have to put a lot of thought into how to play cards to maximize their benefits will probably not like Munchkin since there is a lot of text on the cards. A lot of technicalities also tend to pop up where players need to decide how the text on the cards should be applied.

Probably the biggest problem with Munchkin is that it relies pretty heavily on luck. That is not surprising since most of these type of card games rely heavily on luck. Luck comes into play in two ways. First if you don’t draw good cards you probably can’t win. If another player keeps drawing better cards than you, your strategy good or bad, will have no impact on the game. The bigger area where luck comes into play is with drawing monsters. A player can get lucky and always face weak monsters which makes it really easy to gain levels. Other players could keep drawing hard monsters or draw no monsters at all which would give this player a significant disadvantage.

Like the other Munchkin games, some of the cards are kind of overpowered/rigged. This seems typical of the franchise and it kind of plays into the game’s theme. While you will feel kind of cheated when one of these cards are played, you anger will soon subside since Munchkin has never been a game that you take that seriously. I do have to mention one of the cards though since it is very rigged in my opinion. I am talking about the curse card “Dead Last”. This card essentially swaps the players in first and last place. In the game I played I just so happened to be in first place at level nine. On the previous turn I had almost killed the monster to reach level ten but lost the fight because one of the players had two +10 to a monster cards which both got played. Then on their turn the same player swaps places with me using “Dead Last” and proceeds to win the game. I don’t know if it is just me but that card seemed to sway the game a little too much.

Munchkin Zombies is pretty much what you should expect from the Munchkin franchise. The game has the same great artwork/theme that the franchise is well known for. While the game takes a while to get the hang of, the game is pretty easy to play afterwards. While easy to play the game still has quite a bit of strategy. Like a lot of card games, luck plays a big role in who ultimately wins the game though and some of the cards are rigged/overpowered.

Essentially if you like Munchkin and zombies you are probably going to love the game. If you hate Munchkin you aren’t going to like Munchkin Zombies since it plays a lot like the normal version of Munchkin.