Games have been made based on many different themes and mechanics over the years. Pulse, made by Pixel Pi Games, does something new by trying to make a adventure platformer based on a character that is blind and needs to use sound in order to explore her world. Pulse does a fantastic job with the sight by sound mechanic but unfortunately fails to build other mechanics around it to make the game live up to its’ potential.

In Pulse you play as Eva. Eva went blind at an early age and has since developed an ability to use sounds in order to see the world around her (kind of like echolocation). Your footsteps, falling rocks, the wind, and any other sounds will light up part of the world so you can see where you are going. You use this ability to try and figure out what is happening to your people. You must explore the forbidden places of your ancestors to discover the truth behind secrets long forgotten.

One of the best things about the indie game scene is that indie developers are able to take chances on ideas that no large studio would ever touch. Pulse and its’ interesting sight through sound mechanic would have had no chance in the world of ever being picked up by a large studio because it would have been considered too big of a risk.

This sight by sound mechanic is what got me first interested in Pulse. I have to give credit to Pixel Pi Games for creating a mechanic that I have never experienced before. After playing the game I have to say that they did a great job with the mechanic. You really feel like sound is responsible for what you see in the game. Stand still for too long and the whole world will go pitch black and you won’t be able to see until you start moving again. This mechanic does such a great job slowly revealing the world as you progress through your journey.

This mechanic doesn’t just stop at your movement though. Some of the game’s “puzzles” come from finding ways to make sounds that will reveal larger sections of the world. The game uses the wind and rock slides to reveal large sections of the world at a time. I don’t know if I have ever played a game that has done such a good job bringing attention to background sound effects that you would ignore in most games.

The mechanic is actually heavily weaved into the gameplay itself. While I have no idea what it feels like to be blind, I think the game does a good simulating what most people would think it would feel like. At times you are truly walking through the dark having no idea where you are going. You will regularly walk into walls or dead ends since you can’t see far enough in front of you to know exactly where you are supposed to go at any particular time. Overcoming the lack of sight is probably the biggest mechanic in the game and it is an interesting experience. 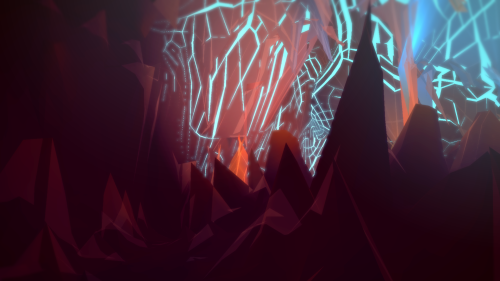 This mechanic really shines when it comes to the visuals. While you usually can’t see a lot of the world at any particular time, the game does a fantastic job using the sight by sound mechanic to make some truly stunning visual scenes. The artwork is particularly well done in the later parts of the game.

While I really liked the sight by sound mechanic, I think the game could have done more with it. The problem is that outside of this mechanic there is not a whole lot to the game. It mostly plays like a very average first person platformer. The rest of the game doesn’t really live up to the game’s potential. At times the game shows glimpses of what it could have been but it relies too much on moving from point to point with some jumping in between. I was hoping that the game would have used the sight by sound mechanic to create some truly unique puzzles that I have never before seen in a game but that never really happened.

Along with the gameplay, I found the story to be pretty average. While I am guessing the game was trying to be vague on purpose, I wish the game would have done a better job fleshing out the story. I am not going to talk about any specifics to avoid spoilers but outside of the main plot it felt like things were missing. I think the game’s story would have benefited with more explanation and less interpretation.

One thing I need to bring up with the sight by sound mechanic is that it might lead to some people getting headaches. I rarely get headaches while playing games but I started getting a headache after playing Pulse for a while. I attribute this to the constantly changing colors from the sight by sound mechanic. This isn’t a huge issue but I just wanted to let people know that the game could cause headaches if played over extended periods of time.

The biggest problem with Pulse is the length. While I played the game for three hours, the game really isn’t that long. I would say that the game is closer to two hours for a first play through. The extra hour that I played the game can be attributed to two things.

Until very late in the game I didn’t even realize that there was a run button which made some of the platforming really hard. While I should have realized it myself, the game could have had a tutorial explaining the controls used in the game.

The bigger reason is a bug I encountered in the game. At one point in the game you need to follow a Moko (an adorable group of creatures that help you in the game) to cross some ice. The Moko guided me about half way across the ice and then stopped moving for some reason. Thinking this meant I had to find my own way across the rest of the ice, I headed out. This was pretty pointless since the world is almost pitch black so it was impossible to figure out where I was supposed to go. Getting frustrated I quit the game and when I came back to the game the Moko started moving properly again and guided me straight across the ice. I ended up wasting at least half an hour trying to find my way across the ice by myself.

The problem with Pulse is that it is short and has little replay value as well. While the game has collectibles to find, this wasn’t that interesting and will probably only appeal to people who like finding collectibles. One of the achievements in the game is to try and beat the whole game in less than a half hour. You would probably have to hurry pretty quickly in order to get it but any game that has an achievement to beat the whole game in 30 minutes is just too short.

The length wouldn’t be so bad if it weren’t for the price. The retail price at this point is $15. $15 is a lot for a game that is only around two hours long. While the game does a lot of interesting things I don’t see the game being worth $15. If the concept interests you I would recommend picking up the game at some point but I would wait for a sale.

Should You Purchase Pulse?

If the main concept of the game doesn’t interest you, there really isn’t anything for you with Pulse. If the concept interests you at all, Pulse is an interesting experience that I would recommend trying out at some time. Due to the price and the length of the game I would recommend waiting for a sale though.