Each player chooses a color and takes the corresponding pawn and chips. The pawn is placed on the Devil’s Tower space. Each player also takes a card and a crayon. Each player chooses two of the numbers on their card to circle with their crayon and keeps these numbers secret from the other players. All of the players roll the dice and whoever rolls highest will get to go first. 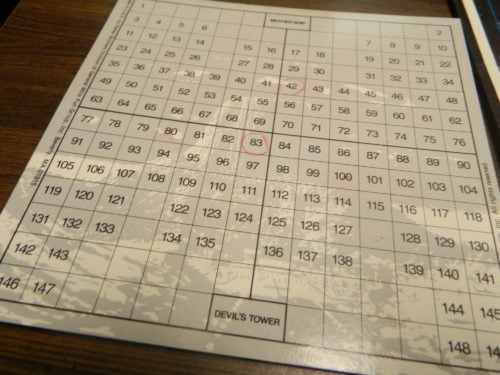 This player has chosen the numbers 83 and 42 to place traps on.

To start a player’s turn they roll the dice. The player will move their playing piece the number of spaces rolled. The players start the game at Devil’s Tower and are trying to move towards the Mother Ship. When they reach the Mother Ship they move back to Devil’s Tower. The players follow this process for the entire game. A player can move horizontally, vertically, and diagonally. While moving a player may encounter chips which they can jump over. Any chips jumped over do not count as spaces moved. 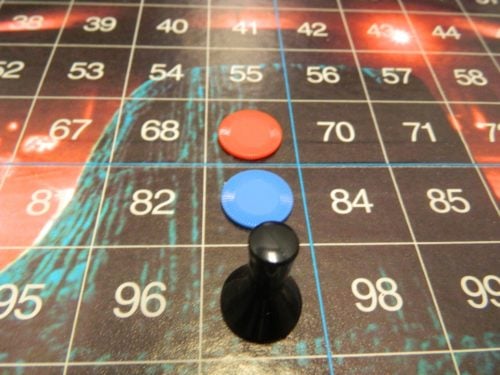 The black player can jump all of the way to space 55 which will only count as one space moved.

The board also includes some spaces that don’t have numbers on them. These spaces are considered safe areas where no traps may be placed. A player cannot end two consecutive turns on a safe space though.

Throughout the game players circle numbers on their cards. These circled numbers represent locations where the player has laid a trap. While moving a player may land on or move through a space where one of the other players placed a trap. When a player lands on or moves through a space that any players circled, those players announce that the player landed on a trap.  Any players who had the number circled get to put one of their chips on that space and circle an additional number on their card. The player who landed on the trap space has to move their piece back to the starting space that they were most recently on (Mother Ship or Devil’s Tower). 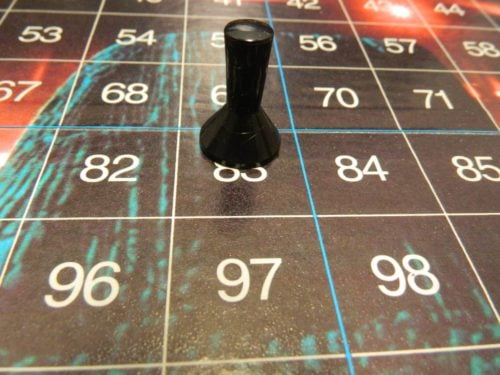 The first player to play all five of their chips to the gameboard wins the game. 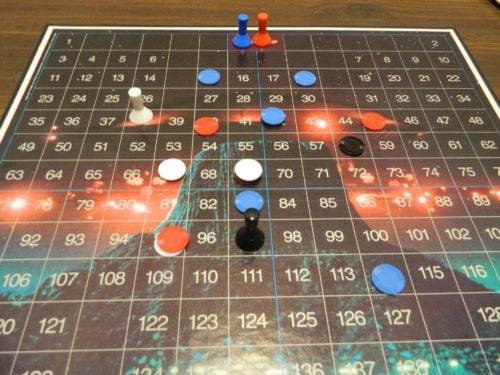 The blue player has played all five of their chips to the gameboard so they have won the game.

For those of you who have never seen the movie, Close Encounters of the Third Kind is a movie about first contact with a group of aliens. With that premise think of all of the different things you could have used to make a board game based on the movie. Most movie tie-in games would just paste the movie’s theme on a generic roll and move game. So what did Parker Brothers decide to do? They decided to make a board game that plays like a game of Minesweeper/Battleship where the players are trying to find the five musical notes to make contact with the aliens (this is a small plot point in the movie).

It should not come as a surprise to anyone that the Close Encounters of the Third Kind board game has next to nothing to do with the movie. The designers took a small part of the movie and decided to base a whole board game on it. While it is not a good idea or makes a good game, I do give the designer(s) credit for not creating the traditional roll and move movie tie-in game with the movie’s theme pasted on. It does feel like the designer(s)had already came up with the idea for the game when the Close Encounters of the Third Kind license showed up and they decided to just paste it onto the game they had already come up with.

Even though the designer(s) tried to do something new, the game just isn’t that good. Essentially the game plays like Minesweeper or Battleship where you just try guessing where the other players placed their traps and try to avoid those spaces. This actually wouldn’t be that bad of an idea if it wasn’t for the fact that there is next to no strategy in the game. Unless you can read the other player’s minds you are just guessing where they are going to place their traps. There are no ways to get additional information about where players have placed their traps. Basically players just randomly pick spaces to place traps on and randomly choose which spaces to move through. The winner will be the player that is the luckiest in the game.

The only information you really know is that the other players are going to mess with you when they place traps. The first two traps placed at the beginning of the game could be placed anywhere. After that point though you can guarantee that players are going to mess with people as much as possible. Whenever a player gets to place another trap they will likely add it in one of two areas. They may add it to one of entrance spaces on the top or bottom of the board since players are more likely to move through these spaces. The other option is to place traps on one of the spaces next to player’s current location. This forces players to try and guess which space the player didn’t place the trap on.

Other than relying almost exclusively on luck, the other problem with the game is that you might be better off just moving in a way that reduces your chances of landing on other people’s traps. You get extra traps when you reach each side of the board but you are usually better off just sitting back and waiting for people to hit your traps. If there wasn’t a rule where you couldn’t end two turns in a row on a safe space, you would probably be better off not moving towards the other side at all. The game could have prevented this by only giving you an additional trap space if you reached one of the two sides of the board. By giving players traps just because other players landed on their traps, the game dissuades people from actually trying to go back and forth on the board. These rules also tend to create a problem where the leaders build bigger and bigger leads.

While it would have even shared less with the movie, I think the game should have forced players to get more than five chips on the gameboard in order to win the game. If players had to get more chips on the board the game would have relied a little less on luck and players could have formed some strategies on how they placed their traps. With only needing five chips players will usually win because they were lucky that other players landed on their spaces. Requiring more chips would have made the game longer but at the same time I think it would have created a better game.

While fans of the film will probably love the artwork on the box and gameboard, the game’s components are pretty bland. Basically the gameboard is a picture of Devil’s Tower from the movie with some numbered squares on it. The playing pieces and chips are really bland and could have been taken from a hundred other board games. I give the game credit for using erasable boards though instead of paper sheets. The crayons don’t always erase well but the game doesn’t have to worry about running out of sheets.

With all of these negatives you would think that I hated the game. While I didn’t really enjoy the game, it is hard to deny that the game had some interesting ideas and would have had potential if it was further developed. The Battleship/Minesweeper game mechanic is a pretty interesting idea for a board game. I think it actually think it could be used for a pretty interesting game. The game needed some significant tweaks though in order to add quite a bit more strategy and a lot less luck to the game. If you actually put in the time and effort to make some significant house rules I think you could make Close Encounters of the Third Kind into a solid game. I don’t rate board games on the potential of house rules though.

While the designer(s) tried to do something interesting with the Close Encounters of the Third Kind license, the game they created just doesn’t work that well. The game has an interesting concept even if it has next to nothing to do with the movie. The problem is outside of being psychic your success in the game is going to come down to who is the best at guessing where the other players placed their traps. Whoever gets lucky and has other players land on their traps is going to win the game.

Square Off Board Game Review and Rules
Click here to cancel reply.