The game Clue is one of those board games that almost everyone has played at some point in their lives. With the popularity of the game it should not come as a surprise that people have tried to make their own interpretations of Clue in order to make money off the game’s popularity. A while back we looked at Angel in the Attic, another one of these Clue knock-offs, which was not a good game. Today I am looking at another Clue knock-off, The Prospector. While The Prospector tries to improve Clue, it actually succeeds in making the game considerably worse.

How to Play The Prospector

Set the gameboard in the center of the table. Sort the supply cards and place them on the corresponding spaces on the gameboard. The extra food and water cards are placed underneath the food and water cards. Shuffle the Prospector and Strike Site cards. Take one card from each deck and place them underneath the gameboard without looking at them. Place the rest of the cards on the corresponding spaces on the gameboard. Each player chooses a playing piece and places it in the center of the board. Each player also takes a check-off sheet to keep track of prospectors and strike sites. The players roll the die and the player who rolls the lowest number gets to play first.

The Prospector is played in two different phases.

In the first phase players will move along the tracks leading out from the center of the board in order to collect supplies. Players can go down the tracks in any order but must acquire the map last. Before rolling the die though the player has to tell the other players which track they are going to go down. When a player reaches the question mark at the end of a track (by exact count) they take the corresponding supply card, they get to ask questions (see below), and then immediately move back to the center of the board to move down a different track. If at any time a player rolls a six, they get another turn.

While moving if a player lands on a space occupied by another player, the player who just moved to the space may not move from the space until the other player moves off the space. 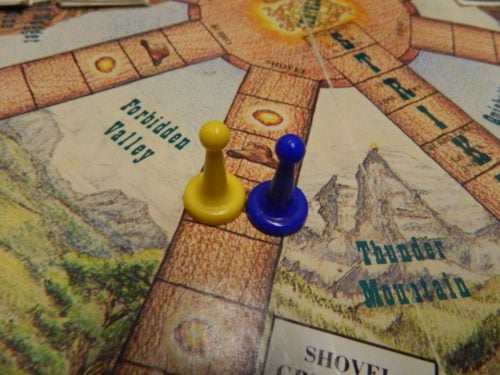 While moving down the tracks players can land on a hat or gold nugget space. When a player lands on a prospector space they take a Prospector card from the board (if there are Prospector cards still available). If a player lands on a gold nugget space they take a Strike Site card (if there are still some available). When a player takes a card they keep it for the rest of the game and do not show it to the other players. 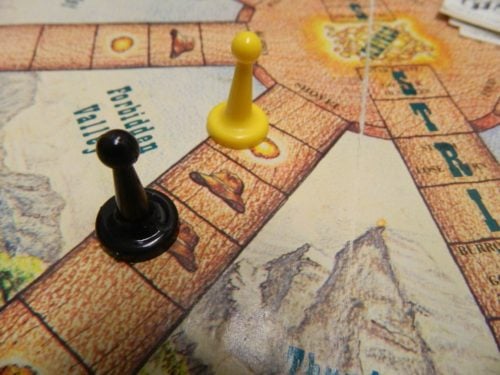 Questioning the Other Players 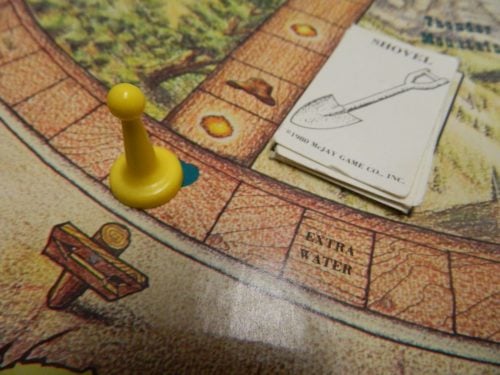 After a player has acquired all six required supplies, they move onto the second phase of the game.When they reach the question mark for the map (the final supply), they stay on the question mark space instead of moving back to the center of the board. On future turns the player moves around the outer ring of the board (following the arrows on the board). While on the outer ring the player can acquire additional food and water as they try to figure out which Prospector card and Strike Site card are underneath the board. 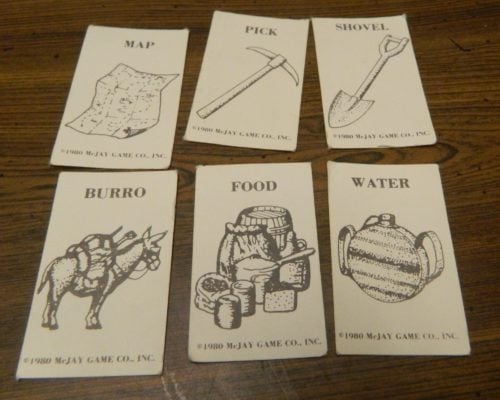 This player has collected all six supplies and thus will start moving along the outer ring of the gameboard. 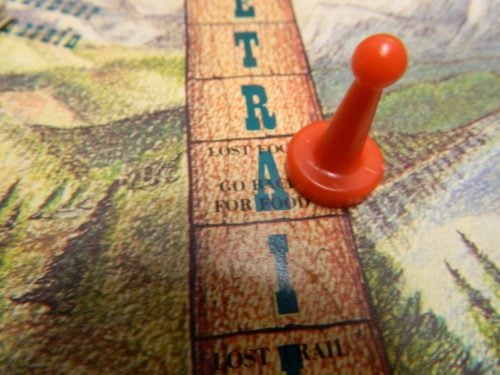 The red player has landed on the lose food space. If they didn’t have extra food they will be sent back to the center space in order to get more food.

When a player returns to the center of the board by exact count, they can make a guess on what two cards are underneath the gameboard. 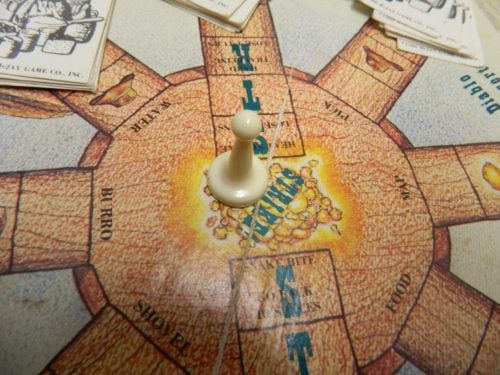 The white player has reached the center space and can make a guess at the solution.

For this game Prospector Pete found gold in the Lost Nugget Mine. Whoever is the first to figure this out wins the game.

If the player was incorrect, they place the cards beneath the gameboard and they are eliminated from the game. The rest of the players continue playing the game with the eliminated player continuing to answer other player’s questions.

My Thoughts on The Prospector

With The Prospector essentially being Clue with a different theme pasted on it, I thought it would best to talk about The Prospector by comparing it to Clue. Opinions on Clue can vary pretty significantly with some people loving the game while others hate it. I personally find myself somewhere in the middle since Clue is a fun game but there are better deduction games out there. No matter what your thoughts are on Clue, I think everyone who has played The Prospector would agree with my opinion that The Prospector is significantly worse than Clue due to a couple poor mechanic choices.

The first poor mechanic choice pretty much destroys the possibility of The Prospector being a good deduction game. Basically the whole premise behind the deduction genre is the mechanic of trying to figure out the mystery before the other players. In Clue each player has secret information and when they share it they only share it with one player at at time so only that player receives the additional information. You can get some idea of what cards a player has based on when they pass cards to other players but you don’t ever know for certain unless the player eventually passes that card to you. Now what would you say if I told you to play Clue where cards were passed to other players face up?

The only way to get additional information that the other players don’t have is to get more of the Prospector and Strike Site Cards than they do. Unlike in Clue, the Prospector and Strike Site cards are not evenly distributed to all of the players so one player could end up getting more cards than another player because they got lucky and landed on more of the spaces that give them out. While everyone will quickly learn which cards each player has (due to the aforementioned problem), the only advantage a player can gain in the game is solely due to getting lucky.

The reliance on luck doesn’t end with just getting the most cards. Rolling well will likely determine who wins the game. In The Prospector there are plenty of situations where players need to roll the exact right number in order to proceed or avoid negative consequences. The most frustrating part of the game is when you get near the bottom of a track and then have to roll an exact number in order to collect the supply card. Players can get stuck for a long time hoping to just roll the right number. This can get even worse when you land on a space that another player is on since you then have to wait for them to roll the number to be able to move and then you have to roll it as well. The game has alternate rules where you can claim a supply item after a certain number of unsuccessful rolls which I would highly recommend using.

The player who rolls the best will likely win the game. Since everyone pretty much learns all of the information at the same time, the winner is going to be the first player to get all of their supplies and get up one of the strike tracks. A deduction game that relies more on rolling well than actually figuring out the mystery does not make for a good deduction game.

Another problem with The Prospector are the components in general. Just by looking at the game’s components you could tell that this game was made by a small publisher. The cards are made out of thin cardboard. The artwork is not particularly good. The biggest problem with the components though is that the game decided to make the text black set against a dark background so it is really hard to read any of the text on the gameboard.

So I have pretty much spent this whole review talking about what is wrong with The Prospector. So what does The Prospector have going for it? While the game does have a lot of problems, the game is not broken. A lot of the rules don’t make for a good game but the game makes sense and there are no rules that break the game. The game is also far from offensive and the game could somewhat serve as an educational experience about the gold rush.

Should You Buy The Prospector?

I really have a hard time recommending The Prospector. If you like deduction games there are much better games out there. If you are looking for a really easy deduction game to play with children that have never played a deduction game before, The Prospector might have some value since players basically work together to solve the mystery. Otherwise if you really like the gold rush theme, you might get a little out of the theme. I personally wouldn’t recommend picking up the game though unless you find it for really cheap and want to experience a bad deduction game.

If you would like to purchase The Prospector you can find it online: Amazon