The auction/bidding genre of board games have been around for quite a while. It might not be the most popular board game genre but many auction board games have been made in the past. It is not surprising that a lot of board games want to try and simulate an auction because auctions are exciting especially if you have the case to actually win the item you want. I have played several auction style games in the past and the issue I have with almost all of them is that while fun, none of them seem to stand out in any noticeable way. When I piked up Going, Going, Gone! I was hoping that it would be the great auction game that I have been looking for. While I had fun with Going, Going, Gone! it failed in becoming that truly great auction game that I have been looking for.

How to Play Going, Going, Gone!

Place the five cups in the center of the table. Shuffle the cards and set them aside. Each player chooses a color and takes 25 cubes of that color. The rest of the cubes are put into the box. The youngest player becomes the first auctioneer. 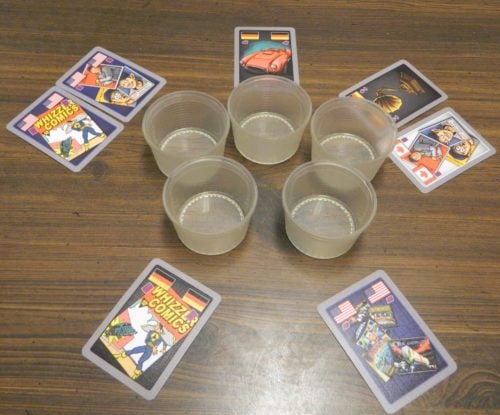 The game has been setup for the first auction. 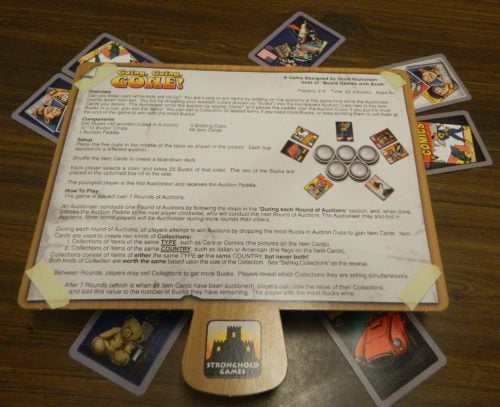 The current auction has ended because the auction paddle was placed over the bidding cups. 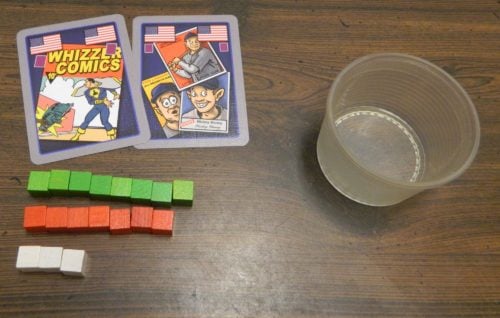 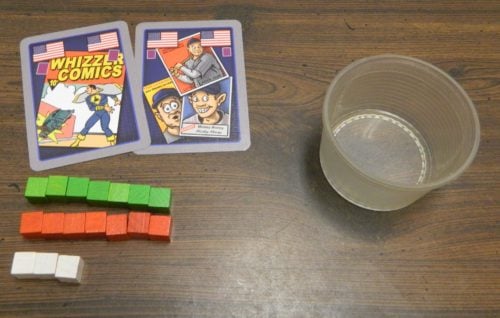 Players take all of the cards they won and can keep the cards hidden from the other players.

After every auction or at the end of the game players are able to sell some or all of their cards for cash. The value of sold cards are determined by the size of the collection that was sold. Collections in Going, Going, Gone! can be formed in two ways:

When a player wants to sell a collection, the collection’s value is determined by the number of cards in it.

If a player has taken all of their cubes from the box and are still owed more cubes, they can exchange ten of their cubes for a 10 token which can be exchanged back for ten cubes at a later time.

After seven auctions all of the cards will have been auctioned off and the game ends. Any cards left in a player’s hand are sold off based on the above chart. Everyone counts up how many cubes they have. Whichever player has the most cubes wins the game.

While Going, Going, Gone! is never going to be confused for a highly strategic game, it could work well with people who don’t play a lot of board games and it should work well with children. The game is really easy to pick up and is a pretty quick game that should only last 15-20 minutes. While people who insist on a lot of strategy might not really enjoy the game, if you don’t mind playing games that don’t require a lot of thought and planning, you can have fun with the game.

Outside of figuring out which sets you want to collect, there is a decent amount of strategy in trying to figure out how much to bid on any given auction. Basically you can’t be too cheap or pay too much for any auction.

If you are too cheap you won’t win any auctions and you will fall behind quickly. Being too cheap is honestly the worst thing you can do in Going, Going, Gone! I honestly don’t see a player who is cheap in the auctions having a chance at winning the game. This is especially true since the game has somewhat of a runaway leader problem where the players who get a large set early will pull away from the other players. By being able to sell off a pretty large set early in the game, the player will have a lot of cubes that they can use to win a lot more cards in future rounds preventing the other players from getting them.

On the other hand you can’t spend too much on an auction either since you will quickly run out of cubes. Always having cubes on hand is critical in the game because you are really hindered if you don’t have much cash. If you don’t have a lot of cash you will have a hard time winning the auctions you really want and you can’t prevent other players from winning cards for cheap. This need for cash will likely make you have to sell some of your sets before the end of the game even if you wanted to try and get the complete set.

When you choose to sell a set is critical in the game. Sell too early and you lose out on a lot of potential profit. Sell too late and you have no cubes left and you end up losing a lot of auctions that you could otherwise have won. Unless you are really lucky you are likely going to have to sell at least one large set before the end of the game. If you have enough cash on hand you are probably best off waiting until you have five or six of a set because that is where you get the best value. You would get more if you waited for the full set but the money you get for selling the set would probably be more useful since you could buy a lot more cards preventing the other players from getting them.

While I had fun with Going, Going, Gone! the game does have some issues.

The biggest issue is probably that the game can become really chaotic at times. Once an auction begins it is really hard to keep track of what is going on. If you are trying to keep track of all five cups you are going to have issues because you can’t keep track of all of them at the same time. If you want to bid on all of the cards you will end up just randomly throwing cubes into the cups since you won’t be able see what the other players are doing. Also with everyone trying to throw cubes into cups at the same time, players’ hands regularly get in each others way and it can become a huge mess.

Before an auction begins you basically need to choose two or three lots to focus on or you are going to be flailing around trying to throw cubes into cups without knowing what the other players are doing. By focusing on two or three cups it is a lot easier to keep track of what the other players are doing which adds some strategy to the game where there would otherwise be chaos. The problem is if everyone just focuses on two or three cups, a player can get lucky and take a card with only one cube if no one else is paying attention to that card. I generally like the chaos in most speed games but it just doesn’t work right in Going, Going, Gone! While I like the speed element in the game, I think it would have benefited from more controlled chaos.

The other problem that I have with the game is the whole idea of the auctioneer. While it is an interesting mechanic that the auctioneer controls the auction allowing the auction to last as short or long as possible, in execution it doesn’t work. While I like the idea of being able to vary the length of an auction, there is too much flexibility since an auctioneer can speed through the numbers to catch the other players off guard or go really slow in order to give themselves a bunch of time to bid on all of the cards. I think Going, Going, Gone! desperately needs some limitations on the speed in which you can call out the numbers.

I also think it is kind of a hassle being the auctioneer. It is way too hard being a bidder and the auctioneer at the same time. Try counting down at a steady pace while also focusing on bidding. Basically you either have to choose to focus on the countdown or trying to maximize your bidding. Since you are going to care more about bidding you likely will abruptly stop counting while you place cubes in the cups. While I think the game meant for the auctioneer to have an advantage I actually think it is a disadvantage.

The tiebreaker in Going, Going, Gone! could have been improved as well. I think the idea that the auctioneer or the closest player to the auctioneer winning all ties is unfair. The auctioneer changes every round but it is an arbitrary way to break ties. Since there are a lot of ties in the auctions, a better way to handle them would have been appreciated. With the current tiebreaker it just comes down to luck on whether you are going to win a tiebreaker or lose crucial cards to another player.

Finally the game’s components are a little hit and miss. The card layout is pretty good but the artwork is average at best. I really liked the idea that the auction cups are translucent allowing players to have a rough idea of what cubes are in a cup but not being able to know exactly when looking at them from the side. The problem is that it is way too easy to see down into the cups and just count the different cubes in the cup. I wish the cups were either taller or there was some other way to prevent players from just looking down into the cups. I really liked the wooden cubes since the game could have easily gone with cheap plastic or cardboard. Possibly the biggest problem with the components though may be with the auction paddle since the cardboard is a little thin which means it could be damaged pretty quickly if you play the game with overzealous players.

Should You Buy Going, Going, Gone!?

I personally would consider Going, Going, Gone! to be a solid, slightly above average bidding/auction game. I had fun with the game as there are some interesting decisions to be made and the speed element brings excitement to the game even though it also makes it a little too chaotic. There are also some issues with the components and how the auctioneer should be handled. While I think there are probably better auction games out there, if you are looking for an auction/set collecting/speed game I think you will enjoy Going, Going, Gone!

If you don’t really like speed games that can get kind of chaotic, Going, Going, Gone! is not going to be for you. If you think the idea of adding a bidding, set collection, and speed game together is an interesting idea though, I think you can have fun with Going, Going, Gone! Due to some of the game’s problems though I would probably wait until you can get a good deal on the game.

If you are interested in purchasing Going, Going, Gone! you can find it on Amazon