The Game of Inventions is a simple game to play. Each turn begins with one player as the reader while the other players try to guess the invention. Each turn is played as follows: 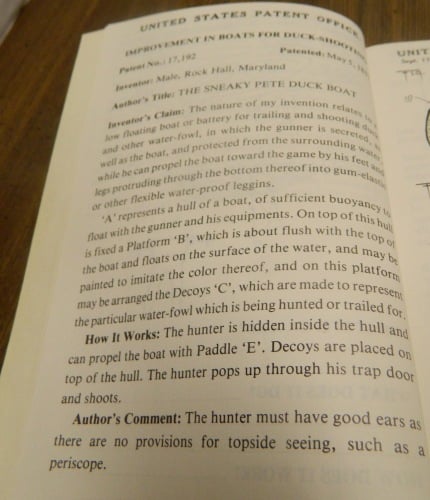 The game continues in this fashion until a player earns 21 points or whatever winning score is chosen before the game began.

Before playing The Game of Inventions I had high hopes. Avalon Hill is a well regarded board game publisher. Creating a trivia game around figuring out what some wacky inventions were and what they were supposed to do sounded like an interesting idea. Unfortunately after playing the game, I was pretty disappointed with it.

The biggest issue with The Game of Inventions is that it really is not much of a game. Unless you are somehow familiar with these patents (you would have to really be into patents/inventions to have ever heard of any of these inventions), the game is essentially a guessing game with very little deduction. Going into the game I thought with some good deduction, it would be pretty easy to deduce what the invention was meant to do. This is not really the case though since there is very little opportunity to try and deduce what the invention actually does.

The game comes with a list of names/functions of the inventions included in the book. With a list of possible answers, you would assume that you could at least make an educated guess. Unfortunately that is not the case since a lot of answers are so similar to one another that it is hard to tell them apart. For example the list of possible answers includes both a “Hot Seat”, and “Medical Hot Seat”. In addition there are at least 3 other answers that are quite similar. How is anyone supposed to be able to determine the difference between a “Hot Seat” and a “Medical Hot Seat” by just looking at the pictures in the first round. Essentially the only way to get points based on just the pictures is to be a good/lucky guesser. In the next two rounds it gets a little better since you get more information about the invention. It is still a guessing game though since there are usually a couple answers that are so close that you just have to guess between them.

This is essentially what a round of the game turned into for me. The turn began and I looked at the picture. I then went down the list and wrote down every possible option that could work. At the picture step I just randomly picked one of the inventions from my list. After every other step I might have eliminated a couple more options but I still had to guess from a list of possible answers. The earliest I guessed a correct answer was after the first text clue was given.

The last issue I have with the game is that the one minute time limit to make a guess is ridiculous. I actually threw out the time limit immediately. There is no way anyone could read through the entire list of possible choices within a minute and still make a guess.

I have been far from complimentary of The Game of Inventions so far. It simply is not that good of game. Even though the game itself is not very good, I actually found the book itself to be kind of interesting. I found it interesting reading through the book and finding out about some very strange inventions that somehow were granted patents.

The Game of Inventions had the potential to be a good game but it failed. The game is essentially a guessing game which involves little strategy or deduction. I got some enjoyment out of reading the book itself to find out about the inventions but the gameplay itself is not fun. The game just seems like it started as a book and someone decided to add a game aspect to it. Unless you love inventions/patents and don’t mind simple guessing games, I would recommend not purchasing Game of Inventions.

Turn On! Board Game Review and Rules
Click here to cancel reply.