To begin the game, cards need to be removed from the image deck based on the number of players.

The rest of the image cards are shuffled and nine cards are place in a 3X3 grid.

Each player takes turns being the “active” player. The active player shuffles the position cards and draws one at random. The position card will show a spot that is highlighted on the 3X3 grid. The card that is indicated by the position card is the active card. The active player then must give a clue (word, sentence, or gesture) that describes the active card. All of the other players try to find the card that matches the description given. When a player wants to make a guess they put their finger on the card that they have selected. They can make no other guesses during this round. If two players select the same card at the same time, whichever player says “Jinx” first get to keep their finger on the card while the other player needs to pick a new card since no two players may pick the same card. 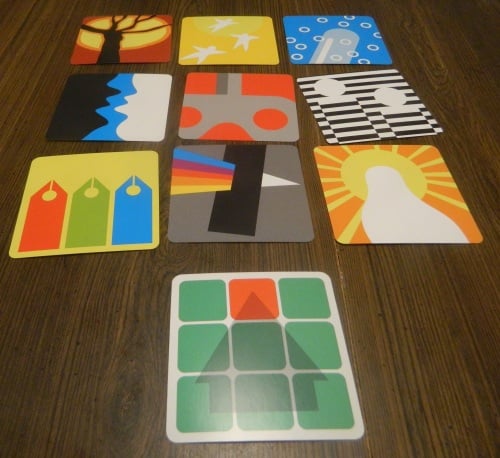 In the picture above, the active player needs to describe the card in the middle of the top row. Since there are several cards that involve light/the sun the player could use the clue “Sunny”.

New cards are dealt out to fill in the empty spaces in the 3X3 grid. The next player becomes the active player and a new round is played. The game continues until there are not enough cards in the draw pile to fill up the entire 3X3 grid. Players count up their cards and whoever has the most cards is the winner.

Back in 2010 a game by the name of Dixit was published. The game received praise from many gamers and it ended up winning the 2010 Spiel de Jahres award, the top award for board games. Due to the success of the original Dixit, many expansion packs and spin off games have been created. I recently picked up one of these spinoff games Dixit Jinx at a recent clearance sale. Unfortunately I have never been able to play the original Dixit so I won’t be able to compare the two games in this review. While it is unlikely to be as good as the original Dixit, Dixit Jinx is still a pretty solid game.

I have never played the original Dixit but after looking at a quick rules reference it appears that there are three main differences between the two game. First Dixit Jinx is a more fast paced version of Dixit. In Dixit everyone had enough time to pick the picture they felt represented the description. In Dixit Jinx all of the players race to pick the picture they think is correct. Second in Dixit Jinx all of the cards are predetermined while in Dixit all of the players get to play a card into the pool of pictures. Finally points appear to be awarded in a different way.

Dixit Jinx’s strongest attribute is its’ pick up and play nature. The rules take a couple minutes to read and you could teach someone how to play the game within a couple minutes. Based on other peoples’ comments it appears that Dixit Jinx is a simpler version of Dixit. The game has a recommended age of 8+ but I think children under that age wouldn’t have trouble playing the game. Their success in the game may vary but they shouldn’t be confused by the rules. Dixit Jinx should work as a great family game since it is easy to play and all of the players should be engaged throughout.

Dixit Jinx is far from a strategic game but you can implement some strategy to help you out in the game. Due to the scoring structure you can never be too obvious or too obscure with your clues. If you are too obvious, the first player will get it right and you won’t get any points. If you are too obscure you will end up losing points since no one will guess the right card. In order to do well at the game you need to give a clue that could pertain to as many cards as there are players trying to guess. Giving a clue that pertains to several pictures increases the odds that you will get some incorrect guesses before a player guesses the right card.

Even though you can employ some strategy into the clue you give, luck will play a significant role in the eventual winner of the game. You can give a great clue that should lead to some points. A player could then just randomly guess your card on the first guess leading to you earning 0 points. This occurred several times to me in the game. I thought I gave a great clue which worked for several of the cards and then one of the players would randomly guess the correct card on the first guess. This is kind of frustrating but that feeling doesn’t last long since games only last 15 minutes so you can have better luck in the next game.

Luck like this can come into play because the other players are essentially just guessing unless you give such an obvious clue that it only applies to one card. Once players start giving clues a little head game starts occurring. If the current player gives what appears to be a obvious clue you start to wonder if they are giving you that clue so you pick the most obvious answer which isn’t correct? On the other hand they could have given you the clue thinking that you would think it was too obvious so you end up picking a less obvious picture? This head game makes Dixit Jinx a pretty interesting experience.

To fully enjoy Dixit Jinx you need to play the game with players that have at least a little creativity. The clues/descriptions provided by the players can be anything. The game gets boring pretty quickly though if the only thing players give as clues are color or number driven. In some cases it is necessary to give a color or number clue due to there being no other options that apply to several cards. Except in those cases, colors and numbers should be avoided since they lead to boring gameplay. When players give unique clues, the game is much more interesting.

While Dixit Jinx doesn’t have a ton of cards, 71 to be exact, I see the game having a lot of replayability. All of the cards are double-sided so there are 142 different pictures so even though you will see the same cards over and over again, the combination of cards that will be showing at the same time are likely to be quite different. With different combinations of cards, different clues will be given. Since the clues are unlikely to ever be the same, it will be a rare occurrence if two games are the same. The easy rules also help with re-playability since there is no need to relearn complicated rules if you want to play the game again after not playing it for a while.

I would say the components are nice. The box is quite small so it will not take up much room on your shelf and it is easy to transport while traveling or going to a party. The cards are pretty thick and should be durable if taken card of. Overall I think the artwork is pretty nice even though it probably doesn’t come close to the artwork in the original game.

Before wrapping up the review I have two small complaints about the game.

Overall Dixit Jinx is an average to an above average game. The game is easy to learn and fun to play. It should work well with families or groups of adults. The game is fun but it is not perfect. Luck plays a factor in the outcome of the game and the game is not nearly as enjoyable if you are playing it with uncreative people that aren’t willing to put in the effort to give interesting clues. Dixit Jinx is the type of game that I would bring out every so often to play a game or two. It is not the type of game that I would play for hours at a time.

If you either didn’t like Dixit or don’t find the game’s concept to be interesting, I don’t think you will like Dixit Jinx. If you already own Dixit and don’t play it a lot, I would probably pass as well since Dixit Jinx doesn’t appear to be much different and the original game is probably better. If you love Dixit though, I think you will like Dixit Jinx. I think it tweaks the Dixit formula just enough that it will feel different from the original. If you end up not liking the rule changes you could always use the cards with the original game’s rules.