Each player rolls the dice and moves clockwise around the game board. If a player lands on a gift space the player can purchase it if they don’t already own a gift of the same value. After paying the bank the player takes a token of the same value as the gift they purchased. 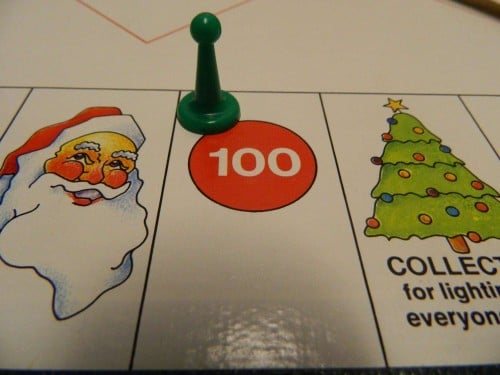 If a player lands on a reindeer, Santa or Scrooge space; they draw the top card from the associated deck. 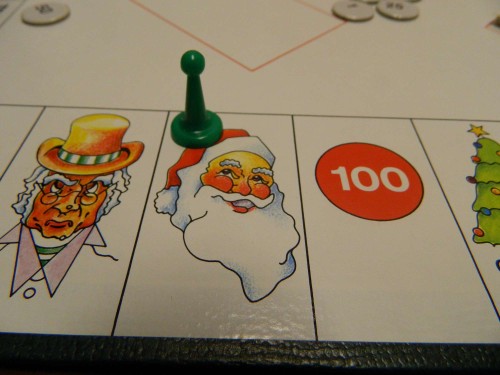 If the player lands on any other space they follow the directions printed on the space.

All money paid to buy gifts is paid to the bank. All money paid for other reasons are paid to the Christmas Club. If players run out of money they don’t have to pay other players or the bank any money that they weren’t able to pay. A bankrupt player is not eliminated from the game and does not have to sell or give up any of their gifts.

Players cannot purchase a gift if they already own a gift of that value. A player could end up acquiring a second gift of the same value though due to a card’s effect. A player cannot sell or trade a gift to another player.

If a player rolls two ones or a twelve while on the Super Shopper space, the player will automatically win the game. 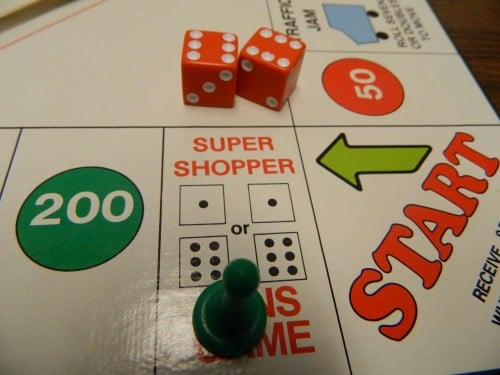 If a player lands on the Traffic Jam space they need to roll a seven or doubles on their turn in order to leave the space. If a player is 15 or younger, they can ignore that rule. 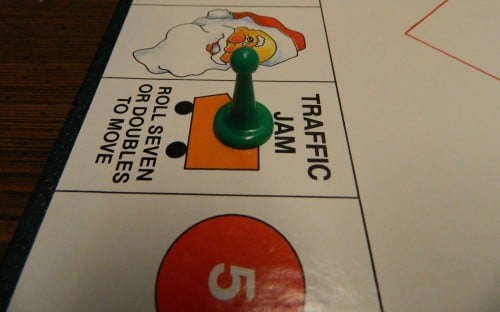 The green player will be stuck on the traffic jam space until they can roll doubles or roll a seven during their turn. 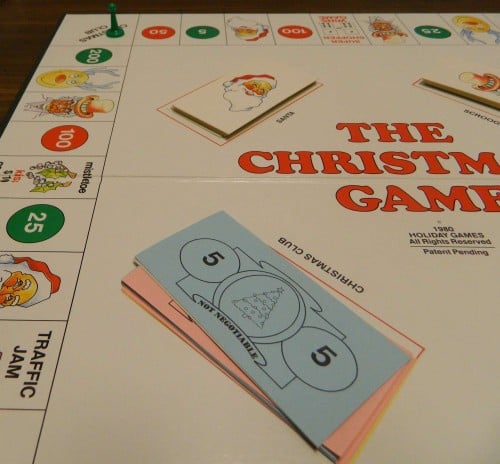 Whenever a player lands on or moves past the start space they collect $50 from the bank.

If a player lands on the sales tax space they lose half of their money to the bank. If your amount of money isn’t evenly divisible by two, the amount owed to the bank is rounded down. 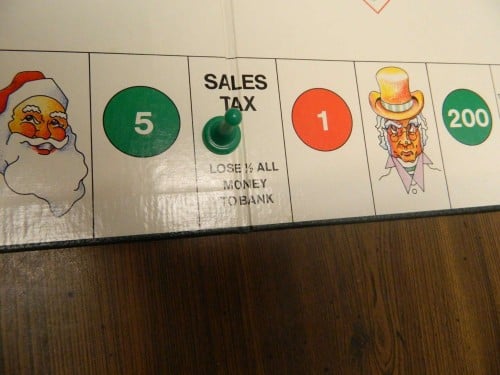 Simply put The Christmas Game is not a good game. It is your typical roll and move game but is also worse than most roll and move games. At times the game feels broken since there is essentially no decision making to be had in the game. Basically you just roll the dice and move around the game board. The only decision you can really make in the game is whether you want to buy a gift that you don’t already own. This isn’t much of a decision though since if you have enough money to purchase the gift you should purchase it since the only way to lose a gift is to have Santa steal it from you. There is no reason not to buy a gift since by not buying it you are forcing yourself to land on the same present another time. Basically the game plays like Monopoly but it doesn’t have any of the properties that you can buy and make money off. The game even lacks the very basic amount of strategy present in Monopoly. If you hate Monopoly, the Christmas Game is even worse. Essentially you win The Christmas Game by being lucky enough to land on every present space or getting lucky when you are on one of the Super Shopper spaces.

Combine the lack of strategy with the fact that the game has a couple mechanics that could totally break the game. Four mechanics in particular are terrible and should have never been put into the game.

First is the Super Shopper spaces. A game should never have a space that you could automatically win the game on by rolling a specific number. While you can’t win the game on your first turn (you won’t be able to land on the space on your first turn), you could theoretically win the game within three turns by doing nothing but landing on a space. While the odds of rolling two ones or two sixes isn’t great and it didn’t happen in the game that I played, it is way too easy for an automatic win condition. Honestly I don’t think games should even have an automatic win condition.

The second terrible mechanic is one particular Scrooge card which is one of the worst cards I have ever seen that punishes players. This card makes you discard all of the gifts you had acquired up to that point. If this card comes up early in the game it is not as bad since you won’t lose that much progress. It still hurts a lot but it won’t totally destroy your chances at winning the game. If you draw this card at the end of the game though your chances of winning the game are next to zero with your only chance being the Super Shopper spaces. This card essentially resets all of your progress and actually probably puts you in a worse position than you started at since you probably will have less money on hand. With so few cards in each deck there is a good chance that at least one player will have to deal with this card each game unless someone wins really quickly.

Next comes the sales tax in the game. Sales tax varies pretty significantly around the US but I bet there is no where in the world that has sales tax of 50%. Anyone who complains about taxes needs to be thankful that they don’t live in the universe this game takes place in since I doubt anyone would be willing to pay that high of sales tax. Even though there is only one sales tax space on the game board you end up landing on the space a lot more than you would expect since cards take you to the space and rolling three doubles also takes you to the space. The 50% rate is way too high and can really hinder a player if they land on the space early in the game. The 50% rate is also a bad idea since it takes some time to figure out how much money you have and give 50% of it to the bank. It would have been easier to just make the tax a flat dollar amount since it would have been more fair and would have been a lot easier to pay.

The final bad mechanic in The Christmas Game is the game’s obsession with making players miss turns. There are so many cards and spaces on the game board that force you to miss turns that you will likely miss around a fourth of your turns. Missing the occasional turn is not a bad thing but when you are lucky to not have to miss a turn is another thing. The traffic jam spaces in particular could be harsh because you could be stuck there forever and since you can’t pay to get off the space the only way to escape is through a dice roll.

In addition to the bad mechanics the game’s components are pretty poor. The game is a locally produced game and you can tell. The cards are quite thin. The game board is quite bland and the artwork is nothing special. For some reason the game decides to use small gray discs to indicate the different valued presents. Instead of gray discs the game could have at least made the cardboard pieces look like presents.

Despite all of the problems with the game, The Christmas Game is not the worst game I have ever played. For some reason the game actually has some charm to it. The game never takes itself too serious which shows in some of the card text. Some of the cards are cheesy but are kind of clever at the same time. If you don’t take the game too seriously you can have some fun with the game as you explore the strangeness that is all over the game. Some people like watching bad movies because they are enjoyable because of how bad they are. The same can somewhat be said of The Christmas Game. It is far from a good game but you can have some fun playing the game as you laugh with your friends and family. To illustrate the strangeness of the game here are just some of the things that happened in the game that I played.

If The Christmas Game was cheap I might actually recommend the game to people that want a cheesy board game to play every Christmas. Unfortunately the game is at least moderately rare since the game is regularly selling for over $60 on Amazon. Unless you have really fond memories of the game or you have a lot of extra money hanging around, I would recommend against picking up the Christmas Game.