The objective of Gift Trap is to be the first player to get both of your markers to the Gifted space by giving and receiving the best presents.

To start a round the current dealer picks which deck of cards will be used for the current round. The dealer places enough cards onto the game board equal to the number of players plus one. The first card is placed on the first space and so on. 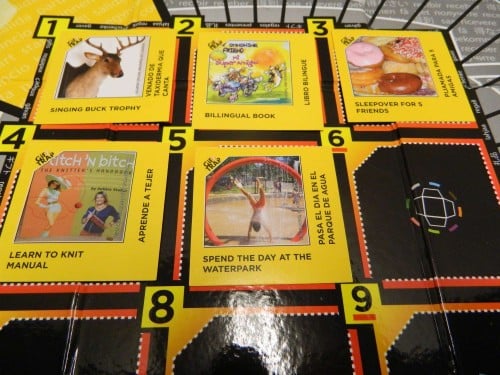 The cards have been dealt out for a four player game.

Once all of the presents are put out, each player needs to give one gift to every other player that they think the person would like. Each player gives a gift to every other player (not themselves) by giving the tile with the number corresponding to the gift they want to give that player (give the tiles face down so the players can’t see them). Since a player only has one tile of each number they can only give each gift once.

After everyone has played all their get tiles, players take turns revealing the gifts they received and the gifts they placed their get tiles on. Points are scored based on the get tile that was placed on the gift that was received. The player who received the gift will move their opened gift forward or backwards based on the points scored while the player who gave the gift moves their closed present the same number of spaces. 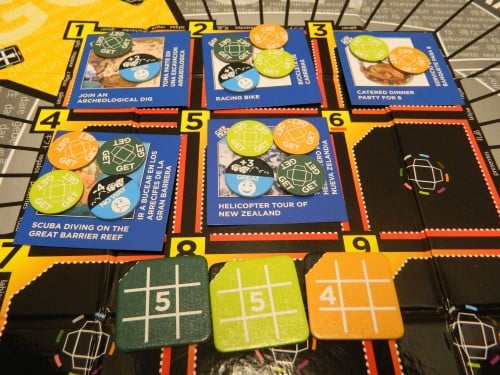 Points earned for gifts are as follows: 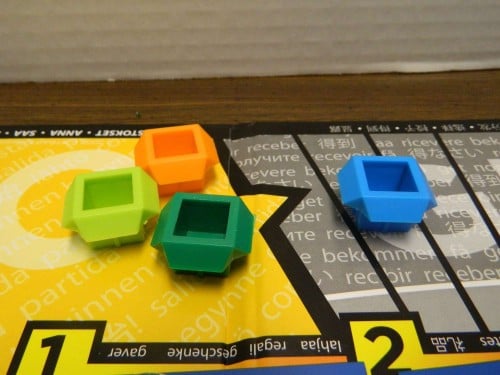 After receiving two +3 gifts and one -4 gift the blue player has moved their pawn forward two spaces. 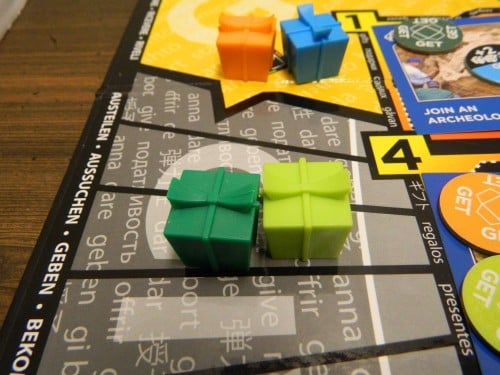 The orange pawn is still at the start space since they gave a -4 gift. The green and light green pawns are at the three space because both players gave a +3 gift.

If at the end of a round both of a player’s pawns are on the Gifted space, that player will win the game. 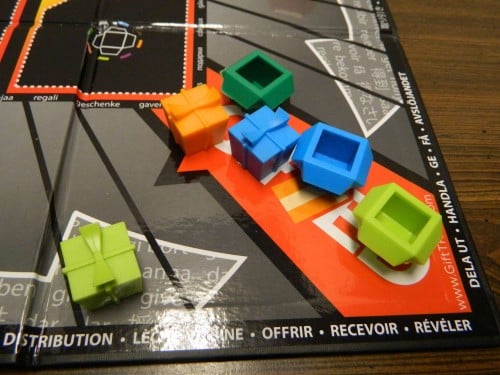 The blue player has won the game because both of their pawns have reached the gifted space.

The game includes three strategy cards for each player. If players choose to use the cards the three cards have the following abilities. 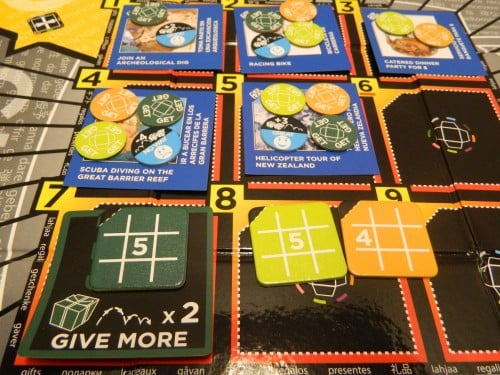 The green player is really confident in the gift they gave to the blue player. In this case they would get six spaces instead of the three they would have gotten if they didn’t use the card. 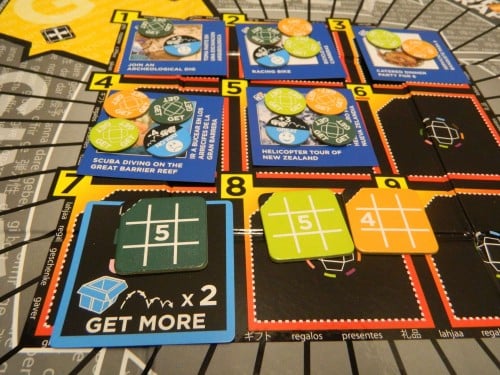 No Longer Up For Grabs

At any point during a round a player can yell out “GiftTrap” and choose one of the gifts on the board to play the card on top of. After this point no one else can score points this round from that gift. Any points already scored for the gift still count but any person who receives the gift after the card is played receives no points for it (for giver or receiver). Each player can only play the card once during the entire game so it is discarded after it is used. 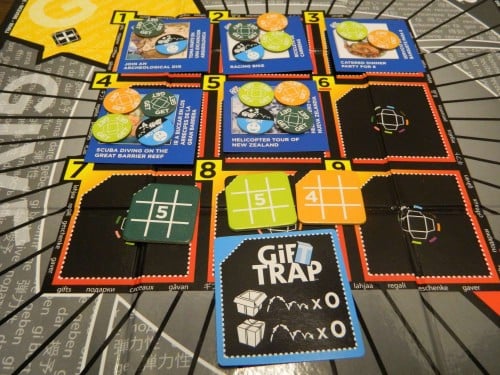 If I hadn’t heard anything about Gift Trap before I saw the game at the thrift store, I probably wouldn’t have even given the game a second look. If I did pick up the game it would have made its way into my long backlog of board games that I haven’t played yet. I wouldn’t have given much thought to the game due to the premise. If someone told you that there was a board game where the whole premise was to give people presents, most people would think that the game would be terrible. I would have thought that it was a cheesy children’s game teaching children how to do good things which would probably be extremely dull. The good thing is that I had actually heard of Gift Trap before I found it at the thrift store so I picked it up. I have to give Nick Kellet a lot of credit because he found a way to make the concept of gift giving into a good to great board game.

I have played a lot of different board games and I can’t think of another game that I have played that plays like Gift Trap. While the game takes some mechanics from other party games, it does a good job blending them together to create an interesting experience like nothing I have played before. The game plays like a lot of other games that test how well you know the other players but it just feels different since you might really know a person but that doesn’t guarantee that you know what present they would like. I can’t really explain why but Gift Trap is just a fun game that should appeal to most people. Unless you hate party games you should be able to find something in the game that will interest you.

Gift Trap’s greatest strength is that the game is just so easy to play. The instructions fit onto a couple small sheets of paper and can be read through in a couple minutes. The game probably takes 2-3 minutes to explain and after a round or two everyone should know what they are doing. Gift Trap is so simple to play that it should work perfectly as a party game since people who rarely if ever play board games should be able to pick up the game quickly and most likely enjoy the game. This game would work great as a way to find out more about your friends and family. The game might not work as well in situations where some players know all the other players better than other players do since these players will have a distinct advantage in the game.

The game also appears to be quite quick. With four players my group easily finished a game in 20-30 minutes but I also played the game with people that know each other well so that probably made the game move quite a bit quicker. Even with larger parties I would guess that the game wouldn’t take more than 60 minutes to play unless the participants really don’t know one another.

While people who don’t like strategy games probably won’t like it that much since there is not a lot of strategy to the game, I think the game is well designed. Players that know each other really well have a significant advantage in the game but the game has some strategy due to the fact that you can only give each gift once. In many of the rounds I knew one gift would be the preferred gift for several players. In these situations you need to figure out which player you think you could do a better job guessing their second most desired gift.

Other than having little strategy, the biggest problem with Gift Trap is the scoring system. The scoring system is not that complicated but it is harder to keep score than it should be. Since you have pieces on two different tracks you need to always make sure you are moving the right pawns at the right times. Our group regularly had to step back and figure out which pawn to move at any particular time. You basically have to assign one player to be responsible for each track or there is a good chance that you will sometime make a mistake with the scoring.

The scoring system itself is not that bad except when you don’t really know one of the players that well or one of the players is really hard to shop for and you know they don’t want any of the items. This becomes a problem because you end up having to just guess what items they would want. This wouldn’t be a big problem except that you are punished if you guess wrong. If you are playing the game with a lot of people you don’t really know this could lead to a problem where the game seems to never end. This is not a big problem though if you know the other players you are playing with. The game also needs to keep the negative points because if they weren’t in the game, players could purposely sabotage the game by picking gifts as items that they “want” that they know the other players would never give them. The negative points make it unlikely that anyone would try to game the system since all they are doing are hurting themselves.

While the concept behind the game might sound strange, Gift Trap is actually a really fun party game. I had quite a bit of fun with the game. Combined with the quick and easy to play nature of the game and I think Gift Trap is a great party game. If you don’t really like party games and only like games that require a lot of strategy, Gift Trap won’t be for you. If you are looking for a fun party game that plays well even with people who rarely play board games I think you will enjoy Gift Trap.

[…] Geeky Hobbies recently looked at GiftTrap so for a more detailed look at the game check out our full review. […]