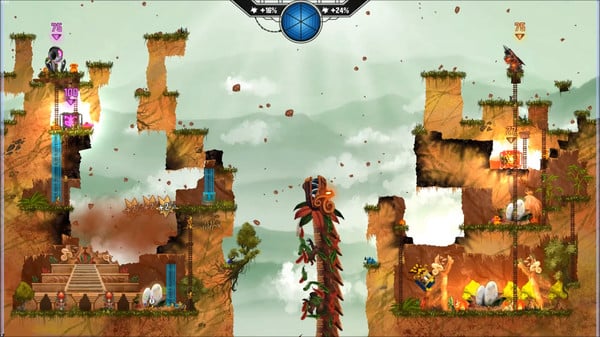 It’s time for the new season of alien’s favorite television show which pits gigantic robots against one another in combat to the death. In this season of the show the battles have come to Earth and the Mayan people have become unsuspecting spectators and eventual worshipers of these huge robots.

Gameplay in Mayan Death Robots plays a lot like the classic PC game Worms. Each player has access to wacky weapons that they use to try and destroy their enemies. Unlike in Worms though each side only has one robot and the goal is to destroy the robot’s power core instead of destroying the robot. Destroying the other player’s robot puts them out of commission for a turn but a new robot is summoned a round later to continue the fight.

Just like Worms the entire landscape is destructible. To get to the other player’s core you will need to blast through the terrain in order to open up a path. Once you get to the core you will either need to destroy the core (deplete it’s health) or knock the core off the screen. The first robot to do so will win the game.

The game comes with ten different robots. During each turn you can choose one action for your robot. Each robot has two unique abilities/weapons that they can use to destroy their opponents. These weapons range from rockets to grenades and even nukes. In addition each robot can use their turn to reposition themselves by jumping into the air. Each robot also has the ability to reshape the land and add some terrain back to the map in the form of Tetris looking pieces. Finally the game will occasionally give players a special weapon that has one use.

In addition to the combat the game includes some additional mechanics that impact each match. During each match both robots will have their own faction of Mayans that worship them. They will help their robot by attacking the other robot and providing other assistance. If you kill the other robot’s Mayans you get a boost to the damage radius of your weapons which will help you destroy your enemy quicker. In addition to the Mayans a lot of the maps have other creatures or objects that mix up the gameplay. Some of the maps even include a boss fight where both robots need to take some time off to work together in order to kill a Mayan god that interrupts the show’s proceedings.

As a kid I loved the Worms franchise. I can remember playing the game a lot against my brother despite not always being that great at the game. I haven’t payed Worms in quite some time though. When I saw Mayan Death Robots on Steam I knew that I wanted to try out the game since it reminded me so much of Worms. While Mayan Death Robots shares a lot in common with Worms, it also innovates enough that it is an entertaining experience for anyone who enjoyed the Worms franchise.

While Mayan Death Robots shares a lot in common with Worms, it also feels like a different experience. Mayan Death Robots has streamlined quite a few of the mechanics from Worms. While in Worms you had access to a bunch of weapons, that is not the case in Mayan Death Robots. Usually you have two weapons with occasional access to a third weapon. This makes your decision process simpler which is helpful since the game gives you a lot less time to make your decision. While in Worms both players took turns, in Mayan Death Robots both players play at the same time and only have a short amount of time each turn to make their moves. You probably have at max thirty seconds to make a decision each round and then you immediately move onto the next round.

This streamlining is good and bad in my opinion. I kind of wish that there was more variety to the weapon choices for each robot. Having two weapon choices doesn’t give you nearly as many options as you had in Worms. The weapons are also more realistic than some of the weapons in the Worms franchise. The streamlining does do a good job speeding up the game though. While you had to sit around just staring at the screen while the other player made their move in Worms, with the quickened pace of Mayan Death Robots you don’t have time to just sit there waiting since you need to be planning you next move. With the quickened pace you will also not always make the perfect move which is okay since you need to put it behind you since your next move happens immediately.

While I wish the game had more weapons for each robot and the weapons had a little more variety, I give the game credit for making all of the robots feel and play differently. While a lot of the robot’s attacks are kind of similar, each robot has distinct abilities that makes playing each one unique. A lot of the attacks are of the rocket or grenade variety but each one has a unique twist that makes them play differently. While I don’t think any of the robots are considerably more powerful than others, I know that I already have my favorites that I am considerably better with. I think all of the robots have their own merits though and if you figure out how to play them correctly I think they will all be competitive.

Mechanic wise the game works a lot like Worms. The two main differences is that you need to use an action to move around the battlefield and in Mayan Death Robots you can actually rebuild the environment.

While I can see why the game handled movement by forcing you to use an action (due to time reasons), I wish you could move on your turn and still perform another action. Due to having to use an action to move I ended up only moving when I had to since I didn’t want to waste actions. In Worms I liked moving my characters around in order to position them better but that is much harder to do in Mayan Death Robots.

The ability to rebuild the terrain is possibly the best unique feature of the game. Basically you place Tetris looking pieces on the board which produces terrain in those ares. You can use this ability to protect your core, your robot or even to mess with your opponent. While this power is really powerful the game wisely has a built in reason to use it sparingly. Each turn you don’t use the ability you get another block to place when you do use the ability. This makes players try to sparingly use the ability to avoid wasting turns.

One issue that I had with Mayan Death Robots is an issue that I also have with Worms. In Worms your best strategy was usually to shoot the other player’s worms off the screen or into the water since this lead to instant death. The same holds true in Mayan Death Robots. While you can kill the other player by destroying their core, it is usually easier just to hit the core off the screen.

While I am only through a third of the campaign, I have found the campaign to be pretty interesting. The story is interesting. The game does a pretty good job with the premise but I wish the game would have been a little wackier since you are playing out robot fights on an alien television show. This could have lead to some really funny moments. The campaign setup itself is quite interesting. Each level has the same objective of destroying the other robot’s power core. Where the levels differ is that each level has a small new mechanic mixed in that messes with your strategy. Most of these changes don’t really change the gameplay but they do keep it fresh. The boss fights are the one exception and are an interesting idea where both competitors need to work together for a while and then resume their fighting after the boss is killed.

One thing I have to give the game a lot of credit for is the computer AI. Usually the AI is pretty stupid or relies on tricks in order to win. That is not the case in Mayan Death Robots. The AI in the game is actually really good. I had the difficulty setting set to the adjustable difficulty level which actually does a good job adjusting to how good you are at the game. The computer will actually win games fair and square but if you start losing the game will tone down the computer’s intelligence making it easier to win. So far the game’s difficulty has been about right. Sometimes the computer is a little too easy and sometimes it is a little too hard but it does a good job adjusting to give you enough challenge while not being frustrating.

So far I have played the game for around an hour and a half and have mostly focused on the campaign mode. So far I have completed around twelve of the missions and looking at the menu screen there looks like there is around 30 total missions. If the difficulty stays around where it has been so far I would expect the game’s campaign to last around four to six hours. The game’s difficulty could increase though which would lengthen the experience.

Mayan Death Robots retails for $14.99 and that seems about fair. If you don’t really like these type of games or don’t plan on playing the multiplayer, it probably won’t be worth it to you. If you are in the later category I would probably recommend picking the game up during a sale. If you really like these Worms type games though I think you will really enjoy Mayan Death Robots and you should get your money’s worth out of the game.

Should You Purchase Mayan Death Robots?

Do you like the Worms franchise or think the idea behind the game sounds interesting? If so I think you should definitely look into Mayan Death Robots. I have had quite a bit of fun with the game so far and it looks like the type of game that I will have quite a bit more fun with. The game controls really well and has some interesting ideas that makes for a fun game. While I wish the game had a few more weapons and was a little wackier at times, I can’t say much about the game that disappointed me.