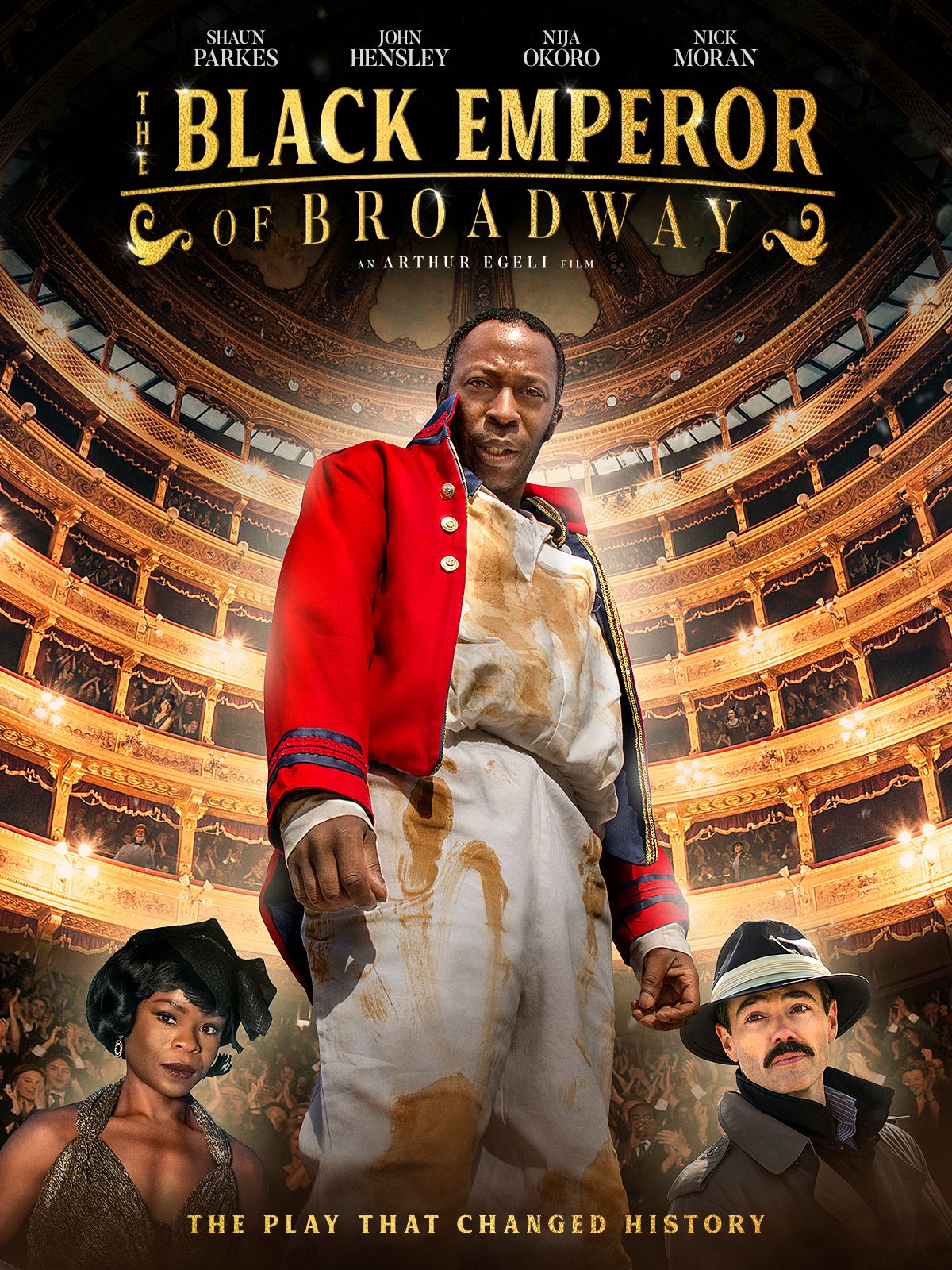 Any regular reader of Geeky Hobbies will know that I am a sucker for films based on true stories. There is just something that I really enjoy about seeing a thrilling, uplifting, or even surprising story that actually happened in real life. For this reason I try to check out as many true story movies as I can. Today I am looking at The Black Emperor of Broadway which releases on VOD today (September 15th, 2020). The story follows Charles Gilpin an actor from the late 1800s through the 1920s/1930s who was one of the first African Americans to star in a Broadway show. I have to admit that I didn’t really know much about Charles Gilpin as I don’t know too much about Broadway’s history, and Charles Gilpin’s name has been kind of lost to history. I was intrigued by the film’s premise though. The Black Emperor of Broadway tells an intriguing tale of overcoming the odds in pursuit of your dreams and changing people’s perceptions in a bygone era of Broadway.

The Black Emperor of Broadway is based on the true story of Charles Sidney Gilpin’s career. Charles Gilpin is known as one of the first African Americans to star in a Broadway show back in the 1920s. The movie touches on his early career where he performed in minstrel shows as well as vaudeville. He found the roles that he was cast in to be offensive though. He dreamt of roles that could take advantage of his acting skills while also not relying on the typical stereotypes of the era. At this time Eugene O’Neill was working on a new play called The Emperor Jones that had an African American in the lead role despite blackface being the norm in the theater industry. After seeing Charles Gilpin in his first major role in John Drinkwater’s Abraham Lincoln, Eugene O’Neill casts Charles in the main role in his new play. The film mostly focuses on Charles Gilpin’s rise to fame and the conflict that comes from him trying to correct stereotypes about African Americans in theater.

As I mentioned earlier I didn’t really know much about Charles Gilpin before watching The Black Emperor of Broadway. I may have heard the name but that would have been it. Part of this is because while Eugene O’Neill became famous in the theater world, Charles Gilpin was kind of forgotten. Due to not knowing much about Charles Gilpin and the fact that films based on true stories can be pretty loose with the facts, after watching the movie I wanted to check how closely it represents what actually happened. I am far from an expert on the topic, but based on a little research the film actually seems to do a pretty good job sticking to the facts. At times it seems to play a little loose with the timeline as it rearranges the order of some events to try to tell a more compelling story. It also streamlines some things in order to create a more compact storyline that is easier to follow. For the most part the movie focuses on Charles Gilpin’s time in The Emperor Jones. As for the overall facts of the movie I think it does a pretty good job sticking to what actually happened.

In a lot of ways The Black Emperor of Broadway is pretty much exactly what you would expect it to be. The story is about a famous actor in the late 1800s to the 1930s who overcame stereotypes and racism to be recognized as one of the best stage actors of his era. During this era blackface was common in the industry and African American characters were basically stereotypes. A lot of the film is about Charles trying to deal with his own success as well as trying to change some of the stereotypes of African Americans in the theater industry. Based on this premise alone it should come as no surprise that the film is mostly a character drama that utilizes a slower pace.

Generally I am not a big fan of Broadway theater as the only Broadway performances that really intrigue me are musicals. Despite this I thought The Black Emperor of Broadway was still quite satisfying. In many ways the film is about chasing your dreams and the roadblocks that Charles Gilpin encountered along the way. Not surprisingly as an African American actor during the 1920s Charles Gilpin encountered quite a bit of racism during his career and this lead to some issues in his life and career as he tried to fix some of the typical stereotypes of that era. While he was well regarded actor, his life was quite hard as well. I genuinely found the movie to be both entertaining and informative about an actor whose name was mostly forgotten.

As the movie mostly just features theater acting and two or more characters talking to one another, the acting had to carry the film. I would say that the acting in the film is quite good. As it is a smaller budget film the movie doesn’t really have any A-list actors, but I think they do a good job in the movie. Shaun Parkes does a really good job in the role of Charles Gilpin. John Hensley is also quite good as Eugene O’Neill. The supporting cast is pretty strong as well.

Probably the biggest issue that I had with The Black Emperor of Broadway is that it can be a little slow at times. This is to be expected to some degree as it is about an actor who was famous over 100 years ago. The story is compelling, but it can drag a little at times. I think this is mostly due to how the movie is framed. Instead of being about all of Charles Gilpin’s career it is mostly focused on a couple of years of his life when he starred in The Emperor Jones. The movie only slightly touches on his earlier career and his career after the role. His time in the role of Brutus Jones is by far the role he is most known for. Spending a majority of the film on just this one role though stretches it a little too thin leading to the film’s slow points. I really think the movie could have benefited by spending more time on his early career as it would have made his rise to fame more satisfying. Even if this would have made the film longer I think it would have benefited it.

At the end of the day The Black Emperor of Broadway is pretty much exactly what you would expect it to be. The film is about the life and career of Charles Gilpin an African American actor who reached peak fame in the 1920s. The movie tweaks some facts (mostly involving the timeline) in order to streamline the story, but I was actually surprised that the film seems to stick closer to the facts than most movies based on true stories. The story is an intriguing look at an actor seeking out their dreams while having to overcome a lot of hardships. The acting is quite good which really helps sell the story. The Black Emperor of Broadway can be a little slow at times though. I think this is mostly because a majority of the film focuses on just a small snippet of his career. I think the film could have benefited from dedicating a little more time to other parts of his life.

My recommendation is actually quite simple. Do you typically enjoy movies based on true stories and are you interested in learning about Charles Gilpin’s life? If the answer to both is no, I don’t see the film being for you. If your answer is yes to at least one of the two questions though I think you should enjoy The Black Emperor of Broadway and should consider checking it out.

We would like to thank Vision Films for the screener used to review The Black Emperor of Broadway.

Recommended For: Those who enjoy movies based on true stories or are interested in learning about Charles Gilpin.