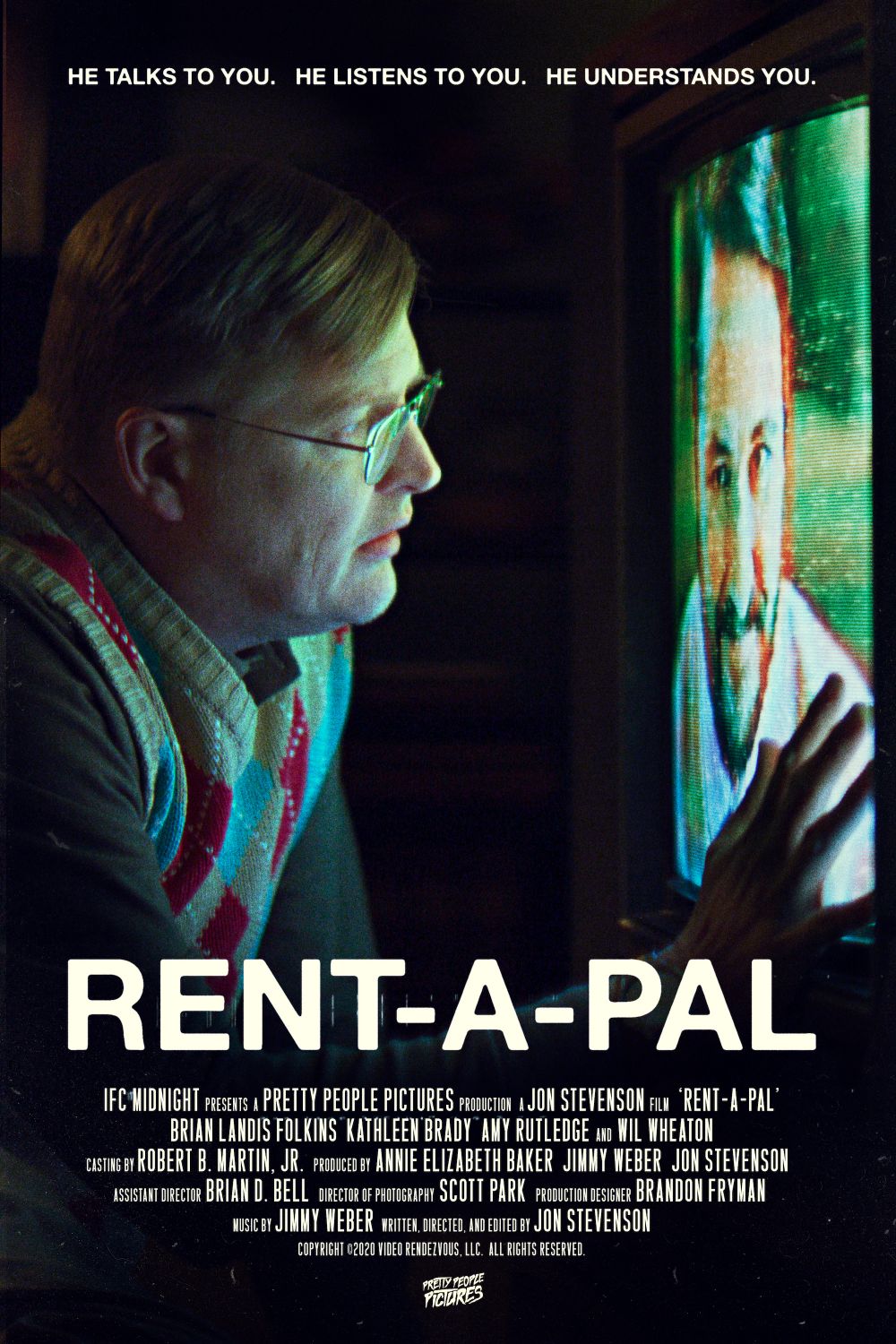 While the horror/thriller genre is arguably one of the most popular movie genres out there, I have to admit that I am generally not a big fan of it. This is honestly due to the fact that I am kind of a coward when it comes to being scared. I am not the type of person that gets enjoyment out of being scared. Of all the movies from this genre I am usually more interested in thrillers as they rely more on telling a creepy/interesting story rather than just trying to scare you. Despite not being a big fan of the genre, I was intrigued when I first heard about Rent-A-Pal. The idea of a haunted/creepy VHS tape that pretends to be your friend was a unique concept that I had never seen before and is surprisingly somewhat based on a real thing (more on that later). Rent-A-Pal is a pretty interesting and enjoyable thriller that keeps you guessing even if the ending could have been set up a little better.

Rent-A-Pal takes place in 1990 and follows a man named David (Brian Landis Folkins). David is kind of a loner. He lives at his childhood home taking care of his elder mother who is suffering from dementia. As taking care of his mother is a full time job he ends up rarely leaving the house which means he has no friends and no real romantic relationships. To try and finally meet someone he joins a video dating service. One day while he is at their offices he finds a tape called Rent-A-Pal. This tape features a man named Andy (Wil Wheaton) who basically acts as the viewer’s friend giving them company, and friendship. David’s fortunes start to turn around, but he soon discovers that Andy’s friendship comes at a cost.

Before I get into my thoughts about the film I wanted to discuss one of the reasons that I was intrigued by Rent-A-Pal in the first place. Most people probably won’t find the whole premise of a VHS tape where someone pretends to be your friend to be that realistic. These type of VHS tapes actually existed in the 1980s and 1990s though. I have never personally seen one of these VHS tapes before, but there was a VHS tape created back in the 1980s/1990s called Rent A Friend that is pretty much just like Wil Wheaton’s role in this film (you can actually find clips of the tape online or it was re-released on DVD

at one point). The tape basically had someone pretend to be your friend and do various activities with you. In fact there were other spinoffs of this premise where people would pretend to be your boyfriend/girlfriend. Even the idea of VHS dating actually happened even though it seems to have only been relegated to large cities. I have only seen snippets of these VHS tapes, but the movie seems to recreate them surprisingly well. While this has no bearing on the actual movie I thought it was an interesting little tidbit.

There were a lot of things that I really liked about Rent-A-Pal. To avoid spoilers though I am not going to get into specifics about the plot. In a lot of ways the movie is about a man who is kind of a loner. He doesn’t have any friends or romantic relationships because he is mostly focused on taking care of his mother. In a lot of ways you feel sorry for David who seems like a good person who has had a hard life. While the movie is a thriller at heart, there is some interesting drama elements to the film as well. In many ways the movie is about loneliness and what people are willing to do to have some companionship.

The movie is still at its heart a thriller. For those that are curious about how scary Rent-A-Pal is, it isn’t. This is coming from someone that doesn’t watch many horror movies because he is kind of a coward. I don’t know if the movie is really even trying to be scary either as it doesn’t have any jump scares or other elements that are particularly scary. If you are looking for a genuine horror film filled with a lot of scares you will probably be a little disappointed by Rent-A-Pal. Instead the film is more like your typical thriller movie. Parts of the movie can be a little creepy, but that is about as far as it goes.

I think Rent-A-Pal does a good job with the creepiness. I think this has a lot to do with the acting. The acting is quite good in my opinion. Brian Landis Folkins does a good job in the lead role. Wil Wheaton also does a fantastic job as Andy. He kind of plays the character as both honest and kind, but also kind of creepy at the same time. The movie does a really good job taking sections of the tape that are meant to be kind of normal (at least for a VHS friend), and twists them into being pretty creepy and menacing. At first the premise might seem kind of silly, but it actually works for a thriller film. There really weren’t any slow points in the movie as it remained engaging throughout.

I enjoyed Rent-A-Pal and anyone who thinks the premise sounds interesting should enjoy it as well. There were two things where I think the movie could have been better though. First I was a little disappointed by the ending. Don’t worry I am not going to spoil it in any way. The ending itself wasn’t bad. It actually makes a lot of sense for the film and leaves room for interpretation. I personally would have went a different direction, but that is just my opinion. The main problem that I had with the ending is that I don’t think the movie did enough to set it up. Things change kind of abruptly and I didn’t think there was enough time spent setting up this change. I really thought the movie was going one way, and then it kind of suddenly goes in a different direction. I didn’t hate the ending, I just wish it was set up better.

The other problem has to deal with the fact that the movie could have utilized the premise a little more. The idea of a creepy VHS “friend” was one of the things that initially intrigued me about Rent-A-Pal. The film just doesn’t utilize the VHS tape as much as it should have. That is a shame as these parts are actually really well done. It probably takes close to the midpoint of the movie to really start playing a big role in the movie, and even then it isn’t used as much as it should have been. I really expected the VHS tape to play a bigger role in the overall story. This doesn’t ruin the movie, but if it leaned into this element a little more I think the movie would have benefited.

I was initially intrigued by Rent-A-Pal because of the premise. Due to the fact that I knew there were actual VHS tapes similar to those that the movie is based around, I was really interested in seeing how it would translate to a thriller film. I found Rent-A-Pal to be a pretty engaging film. In a lot of ways the movie is about how far someone will go when they are truly alone. The premise is engaging and enjoyable. This is helped by the acting which brings a surprising amount of creepiness to the film. If you are looking for a scary film you may be a little disappointed as it isn’t scary. I also thought the ending could have been set up a little better, and the VHS tape could have been utilized more. I still really enjoyed Rent-A-Pal.

As for the final rating I really struggled coming up with my final rating. Ever since I watched the movie I kept going back and forth between giving the movie 3.5 to 4 stars. While writing this review I switched back and forth so often that it was pretty much a coin toss which rating I ultimately went with. I ended up going with a 3.5 as I don’t think it quite deserved four stars but it was very close.

My recommendation for Rent-A-Pal is simple. If the premise sounds interesting to you I think you will really enjoy it and should consider checking it out.

We would like to thank IFC Midnight for the screener used to review this film.

Recommended For: Anyone who thinks the premise sounds interesting or likes thrillers.