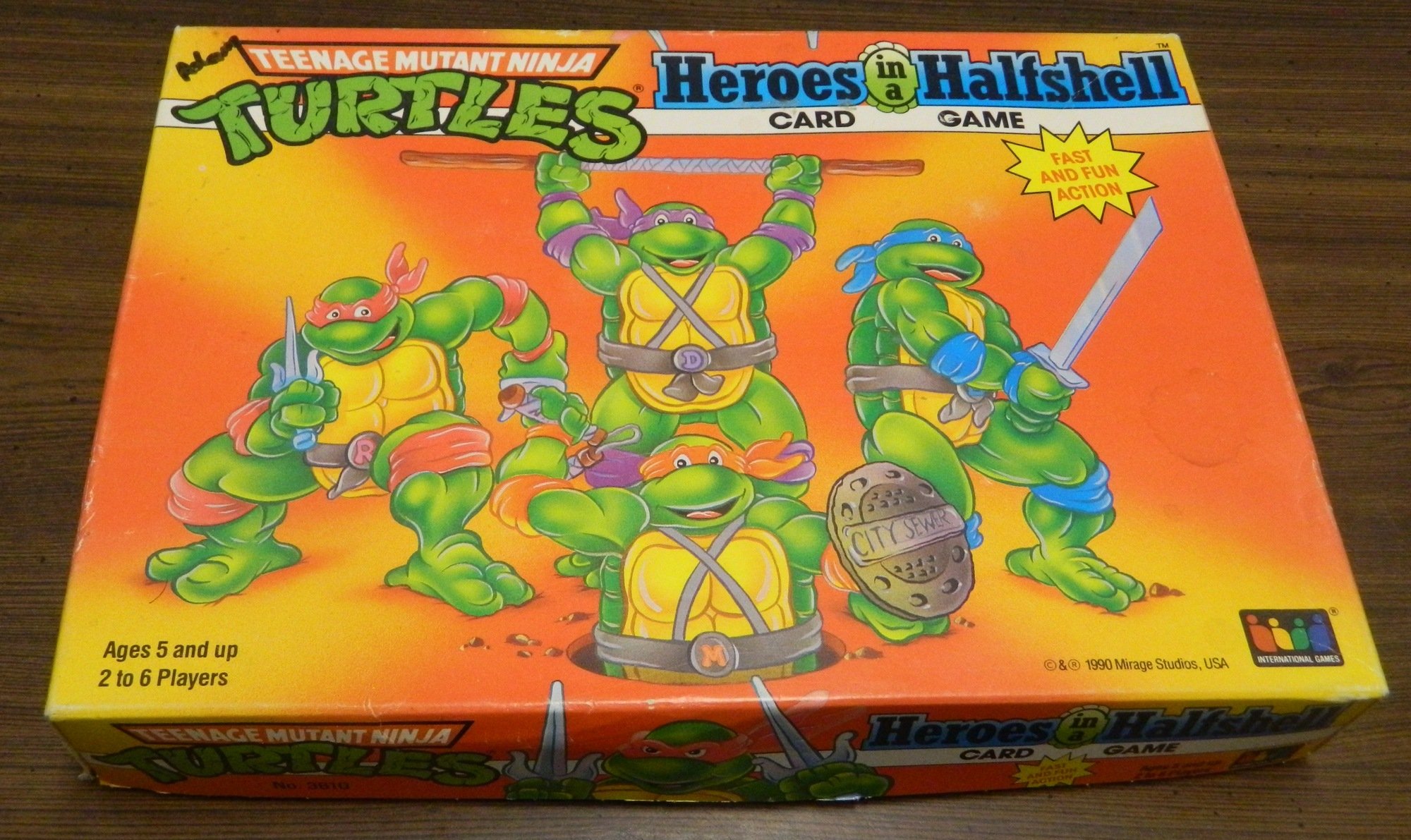 About a year and a half ago I took a look at the board game Giant Spoons which was basically the Spoons game that just used giant spoons. For those of you who have never played the Spoons game, the game is basically a combination of a set collecting game with a game of musical chairs. Players pass cards around the table and when someone gets a set they grab a spoon. Once a spoon is grabbed everyone races to grab one of the remaining spoons as quickly as possible. The player who doesn’t grab a spoon loses a point. Basically Giant Spoons is not a very good game. That brings me to today’s game Teenage Mutant Ninja Turtles Heroes in a Halfshell Card Game. Growing up in the 1990s it shouldn’t be a surprise that I was a huge Teenage Mutant Ninja Turtles fan when I was a kid. Being a fan of the franchise and the fact that the game added some mechanics to the Spoons formula, I was hopeful that the Teenage Mutant Ninja Turtles Heroes in a Halfshell would be an improvement. Boy was I wrong.

How to Play Teenage Mutant Ninja Turtles Heroes in a Halfshell

Players take turns drawing cards from the deck. The first player to draw a Splinter card will get to be the dealer for the first round. The cards are shuffled and each player is dealt four cards. The rest of the cards form the draw pile which is placed in front of the dealer. One shell less than the number of players are placed in the center of the table.

The dealer starts the round by drawing a card from the draw pile. The dealer then discards one of their five cards to the player on their left (face down). The player to their left will look at their new card and discard one of their cards to the next player and so on. When the player to the right of the dealer discards a card it is removed from the game. While the other players are passing cards, the dealer continues to draw cards from the deck.

The goal of the game is to get a set of cards that allows you to take one of the shells from the center of the table. A player is able to take a shell if they have any of the following combinations of cards:

Once one of the shells has been taken from the center of the table, all of the other players can take one even if they don’t have the right combination of cards to take a shell. The player that is unable to grab a shell has to cross one of their “Turtles” letters off. If any players have one or more Shredder cards in their hand when the round ends, they lose one letter (if they didn’t grab a shell they lose two letters). Players can also lose a letter if they have more than five or less than four cards in their hand at any time or if they are the first to grab a shell and didn’t have the proper cards to take the shell.

The next round begins with the player to the left of the previous dealer becoming the next dealer. They shuffle the cards and deal four to each player. The shells are placed in the center of the table and the next round can begin.

When a player crosses off their last “Turtles” letter, they are eliminated from the game. One of the shells are removed from the table and the rest of the players continue playing. The last player remaining wins the game.

My Thoughts Teenage Mutant Ninja Turtles Heroes in a Halfshell

Back when I reviewed Giant Spoons there were quite a few things that I didn’t like about the game. I was hoping the Teenage Mutant Ninja Turtles Heroes in a Halfshell Card Game would fix some of these problems. Unfortunately I actually think it finds a way to make the game even worse.

One of the things I didn’t like about the Spoons game was that at times it felt like a chore as you pretty much chose a card to collect and hoped you got all of your cards for that set before one of the other players found the cards that they needed. I had some hope for Teenage Mutant Ninja Turtles Heroes in a Halfshell since it actually made some tweaks to the gameplay that could have fixed this problem. The problem with the Spoons game is that there is only four of each card so if you let one of the cards from the set go, there was no point in continuing to collect that set. Teenage Mutant Ninja Turtles Heroes in a Halfshell tried to fix this problem by adding more of every card, allowing you to collect one of each turtle instead of having to just collect cards from one turtle, and even including cards that featured two turtles. I thought this would speed up the game and add a little strategy since you actually could change your strategy partway through a round While these changes actually worked in some ways, they ended up going way too far.

The biggest problem in Teenage Mutant Ninja Turtles Heroes in a Halfshell is the fact that it is way too easy to collect sets in the game. I would actually say that in close to half of the hands one player will actually be dealt a winning hand. In most of the other rounds a player can get their set after drawing one or two cards. I think the longest round in the game I played might have took five to ten cards before someone had a set. This creates problems for the game. Rounds end so quickly that the game basically relies entirely on luck. You can be dealt a victory without doing anything. If someone is not dealt a victory the first player has a big advantage since they could easily draw the one card they need to win before any other player gets another card. While rounds in the Spoons game can sometimes take too long, the opposite is definitely true in Heroes in a Halfshell since a round could end as quickly as it begins.

The second problem that I have with Teenage Mutant Ninja Turtles Heroes in a Halfshell Card Game is the fact that the Shredder cards are a terrible idea. The problem with the Shredder cards is that all they do is add luck to the game. The cards are mostly pointless since you are going to get rid of them as quickly as you can since there is no point in keeping them in your hand. If they were discarded from everyone right away it wouldn’t be a huge problem except for the fact that rounds can end as quickly as they begin. Most times players aren’t even given a chance to get rid of any cards before a round ends. A player in this situation will end up losing a point and they had no way of preventing it. I don’t like when games add punishments to players that couldn’t be avoided. While it might not impact every game, I could see a player losing a game because they were unlucky and were dealt a lot of Shredder cards. The biggest problem with the cards is that since they don’t really add anything to the game, why were they even included?

The third problem that I have with the Teenage Mutant Ninja Turtles Heroes is a Halfshell Card Game is a problem that it shares with the Spoons game. The two player portion of the game is totally pointless. Basically it all comes down to which player is luckiest and is dealt a set first. The speed element is totally eliminated since you can’t grab a shell unless you have a set. When it gets down to two players it is a race to be the first to get a set. Players basically just pass around cards until someone wins. A pretty anticlimactic end to the game in my opinion.

While not terrible I don’t think the components are really a positive for the game either. The game feels like a cheap cash in attempt on the Teenage Mutant Ninja Turtles license. The card quality is decent but could be better. The artwork is not bad but something must have went wrong with the printing since the coloring on the Turtles is messed up. Michelangelo and Raphael along with Donatello and Leonardo can’t be distinguished by their colors since the orange/red and purple/blue are so similar that you can’t tell them apart. Basically you will need to use the weapons to tell the turtles apart. The bigger problem is with the shells though. While I like the thematic touch, the shells are made of such thin plastic that I can’t see them lasting through more than a couple games before they start to crack. If you want them to last I would probably recommend replacing them with something else.

Since I have spent almost all of the review insulting the game, I thought it was fair to bring up the game’s couple positives even though the game as a whole is not very good. First the game is quick to learn and play. You can learn the game in minutes and it is easy enough that young children can learn it pretty easily. It shouldn’t take longer than fifteen to twenty minutes to finish the game so you don’t have to waste too much time with it. If you don’t mind a game that relies entirely on luck and requires little thought you could have a little fun with the game. Finally while I wouldn’t recommend playing the game, Teenage Mutant Ninja Turtles collectors may still be interested in adding the game to their collection.

Should You Buy Teenage Mutant Ninja Turtles Heroes in a Halfshell

Even though I didn’t have high expectations for the game, somehow Teenage Mutant Ninja Turtles Heroes in a Halfshell found a way to disappoint me. While the game is easy to play and you can have a little “dumb” fun, it just isn’t a very good game. The game relies almost entirely on luck. Some rounds end before they even begin. The Shredder cards are just unfair and the two player game is terrible.

If you would like to purchase Teenage Mutant Ninja Turtles Heroes in a Halfshell Card Game you can find it online: Amazon