The object of the game is to not be left without a spoon.

The game continues in this pattern until someone has acquired four cards of the same number and grabs one of the spoons from the table. When they grab a spoon, they can either do it quickly or stealthy. Once the first spoon is taken, all of the other players race to grab the remaining spoons. Whichever player was unable to grab a spoon is eliminated from the game. One spoon is removed from the table and another round begins. The last player remaining wins the game. 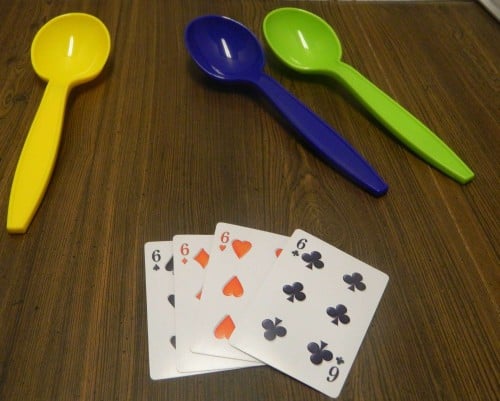 The player has acquired four of the same number. They can now grab a spoon. Once they have grabbed a spoon, all of the other players have to race to grab the spoons remaining.

Giant Spoons is a simple card game that utilizes a speed/awareness element. Giant Spoons kind of feels like a game of musical chairs where the chairs are replaced with spoons and the music is replaced with a deck of cards. Like many other card games, the main object in the game is to acquire four cards of the same number. The speed/awareness elements come into play when one player has gotten four of a kind and grabs one of the spoons. All of the other players need to be aware of when this happens so they can be ready to quickly grab a spoon before the other players. When one player is not aware it can lead to some funny moments when they don’t even notice when all of the other players have grabbed a spoon.

Giant Spoons greatest strength, which happens to be one of its’ few strengths, is its’ simplicity. Giant Spoons is the type of game you can learn in about a minute. Anyone that can recognize the different cards of a standard deck of playing cards should have no problem playing the game. The game also plays quickly. You can play a whole game within 15 minutes which is a good thing since players who are eliminated early won’t have to wait around too long.

Unfortunately this is pretty much where the positives end since Giant Spoons has a lot of problems.

The biggest problem with the game is that you don’t even need the game in order to play it. All you need to play the game is a standard deck of playing cards and something for the players to grab. That is it. I am not a fan of games that charge for a game that exclusively features items that you can find around your house. The only saving grace for this type of game is when the components are of spectacular quality. That is not the case in Giant Spoons. The spoons are made of thick sturdy plastic which is good. The spoons are too large though making it hard to take a spoon without the other players noticing. The deck of cards are nothing special either. They are pretty much a normal deck of cards with the Giant Spoons logo on the back.

Giant Spoons also suffers from a lack of strategy. The only impact you have on the game is deciding which number you are going to try for. Once you have picked that number, you pretty much pick up cards and pass them unless they are the number you are looking for. The game pretty much becomes a game of passing cards until one player is lucky enough to get the last card they need in order to grab one of the spoons. At times the game feels like more of a chore than an actual game.

Something I think that could have helped the game would have been to have extra cards for each number. If there were six to eight cards for each number there could have been quite a bit more strategy in the game. With there only being four of each number, you pretty much need to just pick a number that you want to go after right away since you can’t let any cards of your number get past you. Once you pick your number you can’t really switch your number since one of the cards you would need has likely already passed by you. If there were six or eight of each number though you could change your number much easier since you wouldn’t have to get every card of one number.

If it is not the last round you may be better off not even trying to get four of a kind and instead wait until someone else gets one. By playing the game in this fashion, you can focus all of your attention on watching the spoons. If you just focus on the spoons you likely will be able to grab one of the spoons before another player. This is clearly not how the game is supposed to be played and it will suck all of the fun out of the game but it would work as a valid strategy.

The game also runs into another issue when the game gets down to two players. With only two players the game essentially becomes a chore of who can first get four of a kind. The speed element is eliminated since there is no one to compete against in order to grab a spoon. The player who is lucky enough to draw the last card they need will end up winning the game. This is a pretty anti-climatic end to the game.

Giant Spoons is not a good game. There is essentially no strategy to the game and it pretty much becomes a chore of passing cards around the table until one player is lucky enough to get four of the same number. Your success in the game is dependent on your luck of the draw and your reaction time. The only positive for the game is the fact that it is easy to learn and quick to play

Go For It! (1986) Board Game Review and Instructions
Click here to cancel reply.

why are there jokers in the deck that comes with the game. Are they supposed to be wild cards or just not used.

I think the reason that the deck includes the jokers is that Spoons/Giant Spoons is based off of a public domain game that has been around for quite a while. The original versions of the game just used a standard deck of playing cards and normal everyday spoons. As the game is based off of a public domain games, there are actually quite a few different variations on the gameplay. While the version I played didn't have any rules for the jokers, I am guessing that there are some variations of the game that have the jokers act as wilds or serve some other purpose.