Sword Coast Legends takes place in the forgotten realms of the Dungeons and Dragons universe. You and your group of adventurers are tasked with trying to stop an evil force from taking over the lands.

The combat in Sword Coast Legends is kind of a combination of a turn based strategy game mixed with a more traditional action RPG. The combat is similar to what you would expect from a lot of MMOs like World of Warcraft. The combat occurs in real time but the characters attack automatically. Players can activate abilities from time to time in order to tell their characters which attack they would like the character to perform next. You control several characters at the same time and need to figure out how to utilize each characters’ strengths in order to defeat the enemies. The game has the option to pause combat at any time in order to look over the battlefield and determine what strategy you would like to implement next.

In addition to the combat the game features a lot of mechanics from RPGs and dungeon crawlers like Diablo. The game features a long storyline with a lot of sidequests and characters to talk with. You will encounter tons of loot that you can gather throughout your travels to either equip, sell for money, or hoard like so many gamers (myself included) like to do. 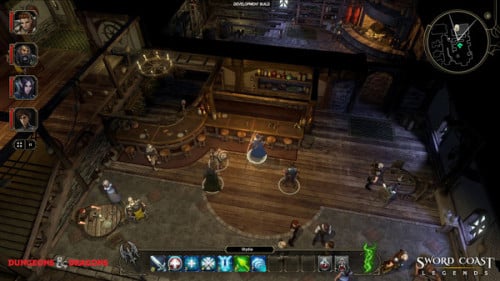 While I haven’t played the game a ton at this point, I had fun with Sword Coast Legends and I plan on finishing the game. The game doesn’t seem to be highly original but it is a good semi turn based RPG. While the game presents you with a lot of customization options (you could probably spend over an hour creating your character), the game was more accessible than I was expecting. If you are a big fan of D&D though you might be a little disappointed with the customization options since some other reviews of the game say that the game is missing some options typical of a D&D game.

Storywise the game appears to show some promise (I have only played the game a couple hours). It starts a little slow and was a little confusing for me but that is probably due to not being that familiar with the D&D universe. The stories in a lot of these type of games start slow though since when you have a 30-40 hour story you can’t really jump straight into the action. I am guessing that the story is going to pick up the more you play the game.

Bang For the Buck

While I have only played the game for a couple hours, I can tell that you will get a lot of play time out of the game. After a couple hours I have only completed the first couple of levels. The story line is apparently 30-40 hours long. With the included Dungeon Master Mode, you could actually play the game as long as you want if you and your friends want to make your own adventures.

Unfortunately Sword Coast Legends is a $39.99 game. While you can get a lot of play time out of the game, I probably wouldn’t recommend the game at full retail to anyone other than people who really enjoy the semi turn based combat style used in the game.

Should You Purchase Sword Coast Legends?

Despite having little knowledge of the D&D universe I have enjoyed my time with Sword Coast Legends so far. The game is easy enough to play but appears to have quite a bit of strategy that you can implement. The story is interesting and you can get a lot of play time out of the game. While I thought the game had a lot of customization options, D&D purists might not like that the game seemed to streamline some of the mechanics from D&D in order to make the game more accessible to people not that familiar with the franchise.