Since Sky Break was just released today (October 22nd, 2015) on Steam Early Access, Sky Break is currently in an early build and won’t be finished until the third quarter of 2016. Since the game is pretty far from completion this review will not contain a score rating since it would not be fair to rate a game in this early stage.

In Sky Break you play as a scientist sent to a strange world in order to try to find the cure for a virus that threatens humanity. When you reach the planet though your spaceship crashes which strands you on the planet. Thankfully the planet was at one time inhabited by humans who built a station on the planet which you use as a base of operations. The base is deserted though because the robots on the planet turned against the humans.

Sky Break is kind of a mix of a bunch of different genres.

One of the main mechanics in the game is combat. At this stage of development your character will have to face off against the robots that have gone rogue. You are equipped with a bladed weapon that you use to kill the robots. The combat works in real time as you can freely attack and dodge at any time. At this time the combat is pretty simple which includes a normal attack, a combo attack that is built up by hitting enemies, and a dodge.

The second main mechanic in the game appears to be exploration/resource gathering. You search the planet for resources that you need to use to craft items as well as rebuild your ship and find the cure for the virus. You can gather resources from robots you kill, plants growing on the planet, and mineral deposits on the planet that you use droids to help extract from. In your base you can use these items to create new items to help you with your adventure.

To help you with your journey the game includes an upgrade system. On the enemies you kill you will find computer chips. These chips come with different abilities that can increase your health, oxygen capacity, attack power or even give you additional combo moves. Your character has what kind of looks like a circuit board which has spaces where you can place the different chips. Since each chip has a different size you need to try to maximize the number of chips that you can equip at any given time.

The game also includes weather events. On this strange planet it will regularly storm which could be quite dangerous. Lightning strikes can hit you and they pack a punch. You need to try to avoid these weather events but you can also use them against enemies to either weaken or kill them. 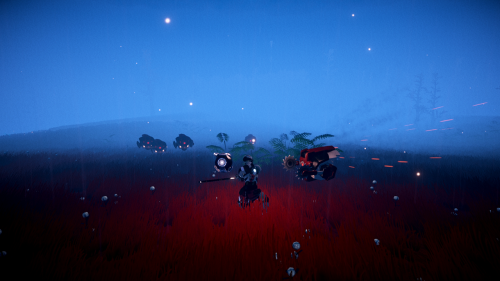 I have always been kind of leery of games put out on Steam Early Access. Too many developers use early access as an excuse to put out unfinished games in order to make a quick buck. Many of these developers never even end up finishing their games. While Sky Break is far from being finished at this point (the final release date is quarter three 2016), that is not necessarily a bad thing. Sky Break already has a strong foundation and with some time to add additional content and polish up some things it could develop into great game.

Sky Break already runs quite well and is an interesting blend of mechanics from several different genres. The game is fun and you can easily see the game’s potential.I like the blending of different mechanics and I think the upgrade system in particular is pretty clever. If you like exploration games and like the theme of the game I think you could enjoy Sky Break quite a bit.

At this point the only big issue with the game is the amount of content currently in the game. Most of the main mechanics appear to be in the game. The early access build of the game that I played only has a couple of the story missions in it though so I really can’t tell what is going to happen with the story at this point. The game is mostly just a sandbox right now. A lot of your time in the game will be spent scouring the world and finding materials to craft things. This does tend to lead to quite a bit of grinding as you kill robots to gain materials used to craft items.

For an early access game that is almost a year away from being fully released I have to say that the graphics are pretty good. The planet shows quite a bit of detail and the game gets a pretty good framerate for an early access game. I have a semi-powerful computer and I was consistently getting 30 fps at the highest graphical settings. Other early access games that I have played have had significantly worse framerates. Unfortunately the game doesn’t appear to have a lot of different biomes at this time so there isn’t a lot of variety in the different areas of the planet that you can travel to at this point. This is one of the things that the developers plan to add in the future.

Being an early access title there are obviously going to be some bugs. For the most part the game seems to be pretty stable though. The biggest bug I encountered was when I moved the station from one area on the map to another I for some reason couldn’t get the lift to take me back down to the planet. I tried everything but it wouldn’t let me leave the station. I restarted the game and the lift then started to work again so I don’t know what was causing the problem. Other than this bug the rest of the bugs I encountered were minor.

A couple of suggestions I would have for the developers include:

It is pretty hard to put a value on Sky Break since you don’t know what the game is going to end up looking like. At this stage the game doesn’t have a lot of story content so a lot of your enjoyment with the game will come from wanting to explore the planet, gather resources and craft items. If you like to explore you could spend a decent amount of time with Sky Break but if you are more interested with following the story you aren’t going to get a lot out of Sky Break right now.

Should You Purchase Sky Break?

With early access games you are always taking some risks by purchasing them before they are finished. At this time Sky Break is not finished. A lot of the mechanics seem to be in the game but some of them need a little polishing. The game doesn’t have a lot of story content right now so you will be doing a lot of grinding just to get materials that you can use to craft different items. Sky Break has a good foundation and if the developers add more content and refine some of the systems, Sky Break could be a really good game.

With the game being in Early Access I probably wouldn’t recommend it to someone unless they are really interested in the concept. I think Sky Break could be a good game but it is a little too early to tell. If the concept really interests you and you don’t mind quite a bit of grinding I think you could have some fun with Sky Break.