To be the first player to get both of their chickens to the finish line.

Each player takes both chickens of the same color and places them on the start space. Shuffle all of the cards and deal four cards to each player (face down). The rest of the cards form the draw pile. The youngest player gets to go first with play then proceeding clockwise.

On a player’s turn they can either play one of the cards from their hand for it’s effect or they can discard one of their cards. After playing or discarding a card the player will draw a new card so they have four cards in their hand. Chicken Out includes four different types of cards which are as follows:

Number Card: The player gets to move one of their chicken pieces the number of spaces printed on the card. The movement can only be applied to one chicken and cannot be shared between both pieces. Chickens move along the path of chicken tracks printed on the roads. Each lane that is crossed counts as one space. So if a player plays a four card, their chicken will cross four lanes of traffic. When a chicken reaches one side of the road entering the side of the road doesn’t count as a space but reentering the road counts as a space. 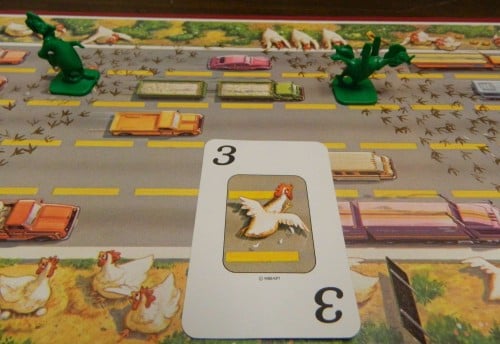 The green player has played a three card. If they are moving the chicken that is further back, the first space would be to move up one space, they would then move to the side of the road (doesn’t count as a space), and the last two spaces would move the chicken to the space the other chicken is on.

Chicken Card: When played a chicken card is played face down. Chicken cards come in two varieties with one card being a wild which has the word “Chicken” spelled in all four colors while the other chicken cards are spelled out in one color. When a player plays a chicken card all of the other players have four different options they can choose before the player reveals the Chicken card that they played.

Players must make this choice for each of the chicken pieces and can make different choices for each chicken. If a chicken is currently in a safe zone that chicken doesn’t do anything since it is not in danger. When all of the players have made a choice, the player flips over the chicken card. The color of the letters on the card indicate which player is in danger. The wild card puts everyone but the player who played the card in danger. For example if a blue chicken card is played, the blue player is the only player who is in danger. If the blue player played a card or used the chicken out for all of their chickens, nothing happens. Each chicken that they didn’t protect with a card or chicken out is returned to the start space. 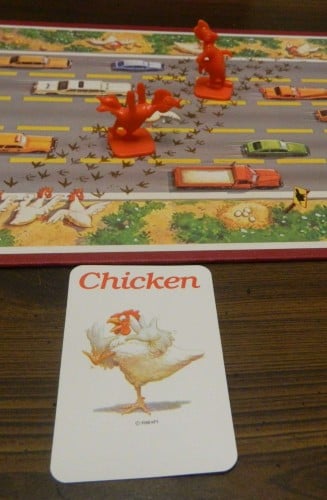 One of the players played a red chicken card. If the red player didn’t play cards to save their chickens or used the chicken out option, their chickens that weren’t protected are returned to the start.

Safe Card: A safe card can only be played when another player played a chicken card. The safe card protects the chicken that it was played on. To protect both chickens you need to play two safe cards or combine a safe card with another way to protect a chicken. 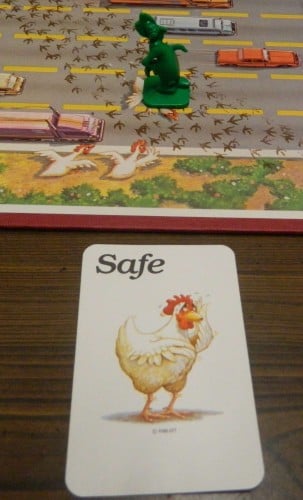 By playing a safe card the green player has made their chicken safe from the current chicken card that was played.

Goose Card: A goose card can only be played when another player played a chicken card and you have a chicken that is currently in danger. The goose card protects a chicken by letting them move to the next safe zone on the game board. To protect both chickens you either need to play two goose cards or combine a goose card with a safe card or using the chicken out option. 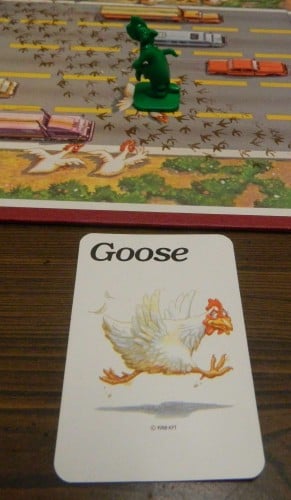 By using a goose card the green player would get to move their chicken to the next safe zone on the side of the road.

If the draw pile runs out of cards, shuffle the cards that were played and those cards become the new draw pile.

The first player to get both of their chickens to the finish space wins the game. A piece doesn’t have to reach the finish by exact count and a goose card can be used to move a piece to the finish. 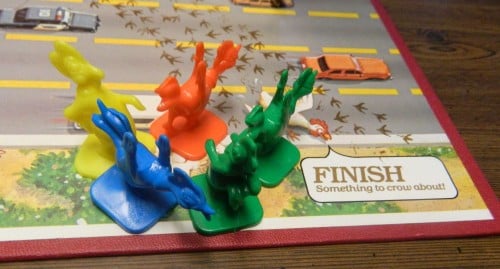 Parker Brothers has a love/hate relationship with a lot of board game players. They have made some of the most popular board games of all time but a lot of their games aren’t very good. A lot of their games are basically roll and move games which have little strategy and usually rely on whoever is luckiest. With that said I wasn’t expecting much from Chicken Out especially since it is the unofficial “Why did the Chicken Cross the Road Game?” While it is far from a great game I have to admit that Chicken Out is a better game than I was expecting.

Chicken Out looks like a typical movement game where you draw cards which determine movement in the game. While this is a big component of the game, there is actually a pretty decent bluffing/press your luck element to the game. Basically the game plays like a typical movement game until someone plays a chicken card. When a player plays a chicken card you have no idea which player(s) are in danger so you need to decide whether you want to take a risk or play it safe. Usually you will be safe doing nothing but you also want to avoid losing everything if you are wrong.

While you are pretty much just guessing whether the player played one of your chicken cards, you can use some deductive reasoning to figure out if you are at risk. Between the chicken cards in your hand and the chicken cards that have already been played you could possibly figure out if you are at risk. If you are not sure whether you are at risk you can protect yourself pretty easily. If you have a safe/goose card you can protect yourself and since there are quite a few in the deck it is likely that you will have one available. You can even use the goose cards to help you move forward on the game board.

All of these mechanics make Chicken Out and interesting little bluffing/press your luck game. For the most part players will be bluffing to most of the players but the players always have to be cautious because if they are wrong they will lose a lot. I actually had a lot more fun with this part of the game than I was expecting. The only thing I didn’t really like was that it was a little too easy to save your chickens if you wanted to. You pretty much will always have at least one safe/goose card and you could otherwise just chicken out. While the game had to make it somewhat easy to save your chickens (the game would have taken forever otherwise), I wish players would have had to take a little more risk since most of the time it is pretty pointless playing chicken cards since at most you will make a player waste a card or two or force their pieces to move back a few spaces.

This actually leads me to the biggest problem that I had with the game. Like a lot of Parker Brothers games, Chicken Out relies heavily on luck. The cards you end up drawing will likely decide your fate in the game. The cards you draw can affect your game in a couple different ways.

First if you draw larger movement cards you will get to move faster than a player that keeps drawing smaller numbered cards. In the game I played I kept drawing one and two cards while another player kept drawing three and four cards. There was no way I was ever going to catch this other player.

Second, card distribution in the game is really important. Multiple times in the game another player and I had a full hand of only chicken, safe and goose cards. While that may sound good it actually isn’t since you can’t move any of your own chickens if you don’t get any numbered cards. You pretty much just have to play a bunch of chicken cards which aren’t that effective. You could also get in a situation where you only have safe and goose cards so you have to waste your turn discarding a card just hoping to get a card that you can actually use. Due to this problem I really wish the game would have had more cards which could have let the game have more movement cards, reduced the number of times you have to shuffle the cards (which is way too often), and it would also have allowed for larger hand sizes which the game sorely needs.

Otherwise Chicken Out is a pretty basic Parker Brothers movement game. I actually liked it more than a lot of Parker Brothers games but that doesn’t mean that it is a great game. I would actually play the game every so often but it wouldn’t be a game that I would play regularly. If you like movement games you will probably like the game since it is easy to play, is pretty quick, and would work well in family situations.

While Chicken Out is far from a great game, I was actually kind of surprised by it. The game has some interesting bluffing/press your luck mechanics to go with the typical movement mechanics from most Parker Brothers games. I just wish there was a little more to that aspect of the game. It is too easy to avoid danger and the game relies too much on drawing good cards to succeed in the game. If you like Parker Brother games I think you could like Chicken Out quite a bit since it actually tries to do something new for a change. If you don’t usually like Parker Brother games but the game looks interesting or you like bluffing/press your luck games I would maybe check out the game if you can find it for cheap.