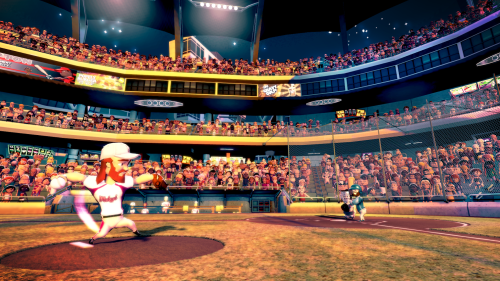 A lot of baseball games have been released throughout the history of video games, some (like the MLB: The Show series) are extremely realistic simulations of America’s Pastime while others are more arcade-like representations where the fun factor is more important than the realism (like The BIGS, MLB Slugfest, etc.). Super Mega Baseball: Extra Innings falls somewhere in between. While the game isn’t as over-the-top (and is more family-friendly than a game like MLB Slugfest) as the arcade games, it definitely isn’t a baseball simulator either. What it is is an above average arcade baseball game (with easier controls and more scoring) that still has quite a bit of realism to it (the players can’t jump twenty feet in the air or throw 120 MPH fastballs).

Unfortunately, the game doesn’t have an MLB license but in this case, it really isn’t that big of a deal. Instead of real-life major league players, Metalhead Software made up their own teams and players and in some ways even used it to their advantage. Because the game didn’t have to use actual real-life players, they were able to include female players (not even just a handful, a lot of them) as well as players of pretty much every ethnicity, age, and body type.

Since Super Mega Baseball: Extra Innings is more of an arcade-type baseball game, the controls are obviously more simplistic than something like MLB: The Show. For hitting, you are basically just aiming and timing your swing correctly. Fielding can be done pretty much automatically if you’d like but if you want to do it yourself, in most cases you just have to move your player towards the ball. When it comes time to pitch, you pick your pitch and then try to match the location. These simple controls make Super Mega Baseball: Extra Innings a very easy game to learn. While these simplified controls help make the game quickly become pretty easy, you can adjust your “ego” (a special difficulty system the game has) and make it much harder on yourself so you don’t blow every team out 20-0.

What I Liked About Super Mega Baseball: Extra Innings: 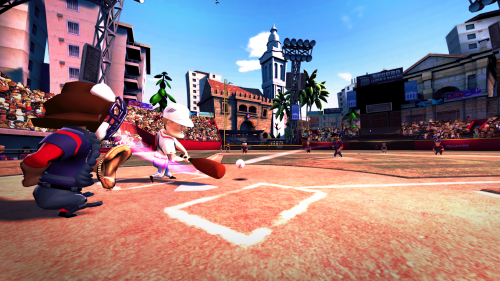 One of the best things about the game is how Metalhead Software took a huge negative (lack of an MLB license) and actually turned it into a positive. Since the game didn’t have to include actual players and wasn’t really going for realism, they were able to include players of all ethnicities, genders, ages, and body types. I love how diverse the teams are. I played as the Beewolves and some of my best performers were a woman who became an amazing slugger (Ruby Greene), a slender white guy named Buster Bigs, a female African American pitcher (Yolanda Cooper), and a guy that looks like he’s about 60 (Billy LeBoink). In addition, a lot of the players have pretty funny names and seem to have different personalities (some slam their bat down when they strike out, others are more relaxed and happy, etc.).

As always, it doesn’t matter if a video game aces every other category. A game could be absolutely gorgeous to look at, have extremely tight controls, and an interesting and unique concept but if it isn’t fun, it isn’t worth playing. Super Mega Baseball: Extra Innings passes the test. It’s especially good as a pick up and play type of game since you can learn how to play it in about five minutes. The controls are simple to learn and the game doesn’t take too much thinking to play so it’s perfect as a casual game when you don’t want to play anything too complicated.

I don’t think Super Mega Baseball: Extra Innings was intended just for children (even though it is very family-friendly), but it is definitely great for them. Baseball isn’t the most complicated sport out there but a lot of baseball video games aren’t super accessible to younger players. For example, MLB: The Show requires almost perfect hand-eye coordination, lots of memorizing of controls, and a pretty deep knowledge of the game in order to have any degree of success with it. Kids most likely aren’t going to like a game like that. Super Mega Baseball: Extra Innings is a much better choice for kids because it takes the sport and strips out some of the complexity while still keeping the essential elements of baseball. You don’t have to worry about managing your team too much (you do have some subs so you can make lineup changes) and things like saving your toughest lefty reliever for when you run into a jam and have to face your opponent’s top slugger aren’t as big of a deal. You mostly just have to worry about making good contact and pitching well.

At first, I really didn’t like the art style of Super Mega Baseball: Extra Innings. However, the cartoony, exaggerated, big-headed (almost bobblehead-like) like art style grew on me. I still only slightly like it but there is a reason why I put it in the positives section of this review. The reason I did so was because I think kids will love it. Since the game was meant to appeal both to adults and children, I think this art style was a pretty solid choice, even if it isn’t my favorite style.

What I Didn’t Like About Super Mega Baseball: Extra Innings:

No Online Multiplayer and Missing Features:

Personally, I don’t really care about the lack of multiplayer since I rarely play video games online anyway. However, for a lot of people it can be a pretty big deal so I need to point it out. The game does offer local co-op though. Also, while I know the game wanted to do a simpler take on baseball, I do miss a few things from other baseball games. First of all, I wish you could make trades. I loved playing as the Beewolves, but there were a few players I would have loved to shop around in exchange for players that fit my play style better. Each team is themed towards a different play style (power hitters, speedsters, defensive wizards, contact hitters, great pitching, etc.) but it would be nice if you could make some changes to your roster via the hot stove. Also, I wish there were a few more game modes included. There are only two different options available: exhibition game or season mode (there are three different options for length but all of them are pretty short). I don’t expect a franchise mode in a game like this but adding some more modes like a tournament or home run derby would have been nice.

Price Is a Little High:

I don’t think $19.99 is a terrible price for a game like Super Mega Baseball: Extra Innings (sports games are pretty expensive), but it isn’t exactly a bargain either. While that is much cheaper than a game like MLB: The Show (and it should be since the game doesn’t have an MLB license and lacks a lot of the features that game has), it is still a little pricey for what you get. You will probably get a decent amount of playtime out of it though (I’ve played five hours already and I’m guessing I’ll get two or three times that amount out of it in the future). If you are price conscious or not super interested in the game, I would maybe wait for a slightly better deal. However, if the game looks like a lot of fun to you (and you like arcade baseball games), you will probably easily get $20 out of it.

If you are looking for a realistic baseball simulation, Super Mega Baseball: Extra Innings is not for you. While it isn’t completely over-the-top (there aren’t power-ups, completely unrealistic displays of power hitting, or outfielders jumping twenty feet in the air to rob a home run), it definitely isn’t a simulator either. However, if you are looking for a baseball game that is more of a pick up and play kind of game (something easier and more arcade-like), this game is a great choice. The game is also great for children since it is much easier to learn and play and it could get them interested in the sport.

As for me, even though I personally slightly prefer simulators (and especially baseball management games like the excellent Out of the Park Baseball) I still had a lot of fun playing Super Mega Baseball: Extra Innings. Since there isn’t really a lot of competition (just management games and the MLB-licensed but inferior R.B.I. Baseball), this is pretty obviously the best baseball game (where you actually play the games) available on Steam. Recommended.