Do you miss the days of couch co-op/multiplayer? Growing up in the 1990’s my brother and I would play a lot of co-op and competitive games split-screen. Thanks to online multiplayer the local co-op days have for the most part disappeared. On a rare occasion though an indie studio will decide to release a local multiplayer game. 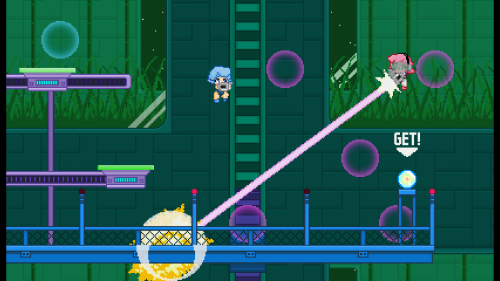 Four players who are part of two teams face off against one another in order to steal the other teams’ capsule. The objective of the game is to move one of the two trams towards the other player’s base. When a tram reaches the edge of the screen the entire game shifts over to the next screen. As you get closer to an enemy’s base, traps will begin appearing that will help the other team try to stop you from proceeding.

The main mechanic in the game is shooting. Each player is equipped with a laser gun that they can use to temporarily eliminate an opponent from the field. While your weapon does have a cool down feature, Capsule Force is the type of game where bullets will be flying everywhere. Your gun has two different modes. Just pressing the shoot button will shoot out short energy bursts which allow you to shoot quite a few bullets before your gun overheats. While one hit from any of these bullets will kill your opponent, they are able to use their shield in order to deflect your shots. You can also charge up your shot which allows you to shoot a larger blast that can’t be deflected by an opponent’s shield.

While your skills shooting will be the main factor in determining how successful you are, you ability to deflect and avoid shots is also important. Good use of your shield is a good way to avoid getting hit by shots and if you time it right you can deflect back a bullet and kill your opponent. While there is not a lot of traditional platforming in the game, in order to avoid all the shots on screen you will need to do a good job moving around the environment jumping and shooting at the same time.

Capsule Force is a hard game to place into a specific genre. It has elements of action games, 2D shooters, platforming, sports, and several other genres. The best way to describe the game is to call it a fast paced multiplayer game. While it might be hard to classify, I had fun playing Capsule Force. The game is quick paced since there are always things going on. Players respawn after maybe a second or two so there is always players on the screen trying to kill one another. What I liked most about the gameplay was the back and forth flow to the game where one team starts making some progress before they are stopped in their tracks and the other team then starts making progress in the other direction. Rarely will one team just steamroll through the other team.

While Capsule Force has both a single player and a multiplayer mode, the game is mostly a multiplayer game (more on this later). The single player acts more like a training course for the multiplayer. The single player consists of 32 levels spread into four sections. Target and advanced target practice give you training on aiming your gun and shooting while moving. The hazard levels train you how to avoid the different hazards in each level. Finally the dash levels help you with your jumping/platforming skills.

In addition to the 32 levels there is a mode that you can unlock once you finish all of them that allows you to play all the single player levels back to back with a shared time limit between the levels. You try to complete the levels as quick as possible in order to progress though as many levels as possible before you run out of time. While this is somewhat interesting, it is not something that I would play very often.

This Is A Team Sport

Capsule Force thrives when you are playing the game with other players. I have only played the game with two players (one on each team) and while that was still fun, I think the game would be considerably better with four players. With two players the winner of each game mostly comes down to who gets a lucky shot which they can turn into a huge swing of momentum.

The reason I think the game would be better with four players is that with more players, there is considerably more possibilities for strategy in the game. With only two players the only real strategy is to shoot the other player and then try to move the tram forward as far as possible. With four players I could see one player going for the tram while another attacks the other players. Each player could also decide to be responsible for one of the opponent players. Just the chaos of having four players shooting at each other at the same time should make a four player game more enjoyable than a two player game.

This need for at least two to four players does bring up a problem with the game. While the single player missions are fine, the game is not worth getting if you don’t have other people people to play the game with. The problem is that you are going to need some friends/family that can come over to play the game. At least at the time of this review, there is no online multiplayer for the game (or if there is I couldn’t figure out how to get it to work). This is a shame because I think Capsule Force could have been really fun to play online since you could always play four player games.

Do You Know What Is Going On?

I honestly didn’t really understand the story. As far as I could tell the story is about a battle for a group of galaxies that were trapped in capsules during a war between several different galaxies. Various galaxies are now fighting each other to gain control over these capsules. Other than that I had no idea what was going on. It doesn’t really matter since outside of the introduction scene, the story is rarely ever mentioned during the rest of the game. The story just serves as a reason for what you are doing in the game. This really didn’t bother me much since in a game like this you care a lot more about the gameplay than the story.

While the story doesn’t make a lot of sense I think the graphics are quite nice for a game drawing inspiration from the 16-bit generation of video games. The characters and environments have an “anime” feel to them. If you like 16-bit style graphics I think you are going to really like the visuals in Capsule Force.

The value you get out of Capsule Force will be pretty dependent on how many friends you have to play the game with. Unless you want to keep replaying the single player levels in order to better your times, you will get one to two hours max out of the single player mode of the game. This means that you need other people to play the game with in order to enjoy the best part of the game, the multiplayer.

The game includes eight different arenas with each one having an alternative layout that you can unlock. While each arena is not significantly different, each one includes some unique elements mostly the traps that help defend each players base. I was fine with there only being eight different stages in the game. While each stage plays a little different, the gameplay is not highly reliant on them since the game pretty much plays the same on every stage. This means that you can get as much enjoyment out of the game as you want until you get sick of the concept itself.

At this time I haven’t played the game a lot but Capsule Force is the type of game that you play for a while at a time and then come back to at a later date. While I played through each stage a couple times I am not sick of the game yet. I plan on revisiting the game again in the future.

To get the full $15 value out of the game though you are going to need several other people that will want to play the game quite a bit. Currently the game doesn’t appear to have any online so if you don’t have a lot of friends that live near you, you might not get a lot of playtime out of the game. If this is the case you may want to consider waiting for a sale on the game.

I enjoyed Capsule Force quite a bit. The multiplayer is wild with bullets flying everywhere and a constant tug of war over who is in control of the trams. If you like action arcade style multiplayer games and you have three other friends/family members to play the game with I think you could really enjoy the game.