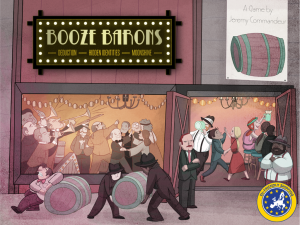 Booze Barons is a deduction game that takes place during Prohibition where each player is a member of a mob. Each mob is trying to sell their own booze in order to earn victory points. Everyone’s mob allegiance is unknown by the other players, even if they happen to be part of the same mob. During each turn players move to different locations around town where they can take deliveries, tail other players to get hints that will lead to figuring out what mob they are part of, or even rat out the player revealing what mob that player is part of (if they have successfully deduced which mob they are part of).

The game looks to have some great artwork. There is also no player elimination so all players can stay involved until the end of the game. Booze Barons is also unique in that it is a deduction game where players are not forced to lie in order to keep their identity secret. 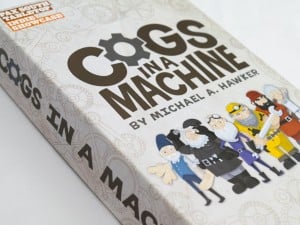 Cogs In A Machine

In Cogs In A Machine each player plays as a gnome who is working to assemble different components. The game’s basic mechanic involves rolling dice. What is interesting about the game is the choices you have with the dice that you end up rolling. Each dice you roll gives you special abilities that you can perform. Some dice give you resources you can use to build components while others let you re-roll dice. Some of the resources you generate are shared resources for all of the players though so if you don’t spend them all in your turn you could end up producing resources that one of the other players will end up using. Players also have the ability to “supervise” the other player’s turns which allow them to mess with another players roll of the dice.

Cogs In A Machine is being made by Michael A. Hawker with the art being created by Amanda Rockwell. The Kickstarter campaign runs until September 22nd, 2015. Kickstarter Page

Kingship The Card Game looks like a cross of games like UNO with more modern strategic card games. Each card has its’ own special ability that gets activated when the card is played. Each card has two special abilities with the second ability being activated if two of the card is played. In addition players can receive special active and passive abilities including having the ability to add new rules to the game if they are the king and they get approval for the rule from the queens. 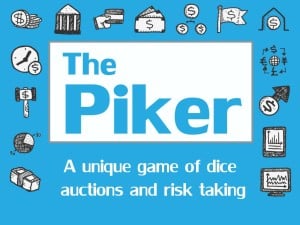 The Piker is a dice rolling risk taking game where you play as an investor. Players use dice in order to bid on face down cards that they want to add to their own investment portfolio. Everyone rolls their dice to determine what they have to invest in the current round. Whoever bids the most (face up pips) gets the card. The player will then need to secure the investment before they get the reward from the card. This requires a player to use their dice in order to pay the associated cost of the card. Players need to bid wisely though since some cards are harmful and will lose you victory points.

The Piker was created by Geym Theori. The Kickstarter campaign runs until September 27th, 2015. Kickstarter Page 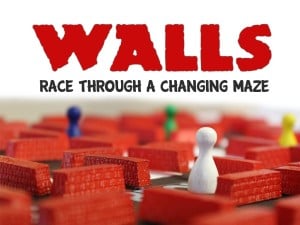 In Walls each player’s goal is to be the first player to move their pawn through the maze in order to reach the exit space. Basic movement involves two dice. One dice determines how many spaces you may move your pawn. The other dice determines how many walls you may move. You could move walls to clear a path for yourself or you could decide to put up roadblocks in order to slow down your opponents. The creator claims that the game lasts around 10-15 minutes but can last up to 30 minutes if you are playing with a lot of other strategic players. While I have not played the game, Walls looks like it could be a fun family game that could also provide some challenge for more strategic players.