Released in the mid-2000’s Big Brain Academy was a series of video games that were designed to “train” your brain. The games utilized various types of brain teasers which were supposed to help you think through problem better and quicker. I wouldn’t say that I was a huge fan of the series but I had fun with the games. The video games were popular enough that both a card and board game were made for the series. Today I am looking at the board game after recently finding it at a thrift store. While the questions are interesting and fun, poor balancing and play testing almost ruins the Big Brain Academy Board Game.

How to Play Big Brain Academy Board Game

All of the players should divide into two teams. Assemble the scale. Sort the cards based on their category and shuffle each pile separately. Place all of the contents in the center of the table so they can be reached by each player. The oldest player will start the game. 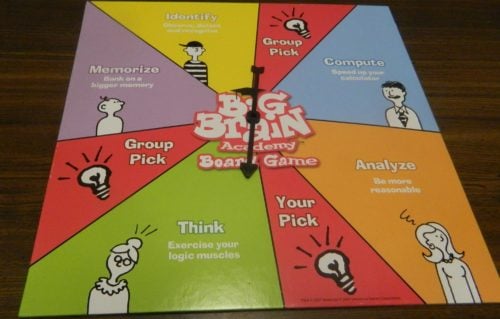 This player has spun the “Think” category and must answer Think questions for their turn.

Each player will have 30 seconds to try and answer as many questions as possible. The player will answer most of the questions by writing directly on the card with the erasable marker. Once a player has completed a card they pass it to the other team and they draw the next card. When the timer runs out the player must stop immediately.

At the end of the round the other team will use the red indicator to see how many of the cards that the current player got correct. The current player will gain one chip of the current categories color for each correct answer. They will lose one chip for each incorrect answer.  If a card has two questions on it, the player has to get both correct to get credit for answering the card correctly. If the player gets both questions wrong, the card is worth negative one chip. 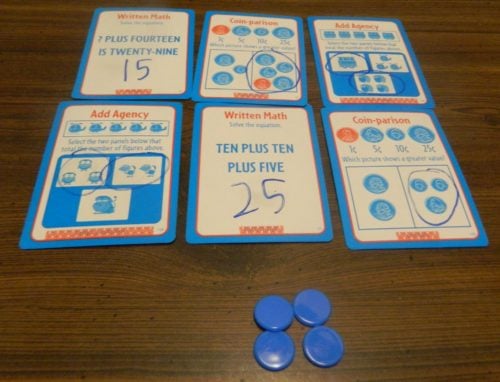 This player has gotten five cards correct and one card incorrect. This player would receive four chips for the round.

After a player receives their chips, the next player on the other team will take their turn. Every player on both teams gets one turn each round. The game consists of five rounds.

Here are a list of the different categories and types of questions found in Big Brain Academy.

The game ends when every player has had five turns. Each team chooses a side of the scale and places all of their chips on that side of the scale. Whichever team’s chips are heavier wins the game. 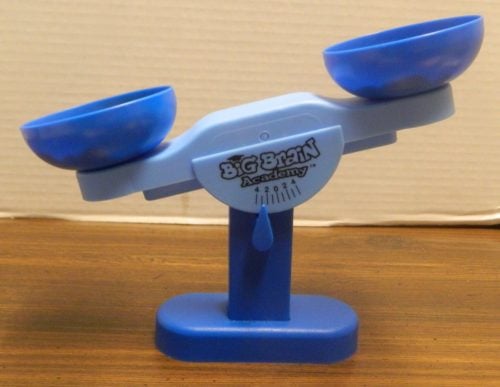 The team on the left acquired a heavier set of chips so they win the game.

My Thoughts on Big Brain Academy Board Game

While I thought the questions in the Big Brain Academy Board Game were interesting and fun, they also lead to the biggest problem in the game. I don’t know how it happened but it seems like there was no balancing/play testing put into the game’s questions. The game has questions that feel like they were designed for children and other cards meant for adults. While neither set of questions are really difficult, the adult questions are considerably harder than the questions meant for children. These two drastically different levels of difficulty are mixed together with there being no way to distinguish them outside of sorting them yourself. Big Brain Academy is probably one of the least balanced games that I have ever played. This difference in difficulty comes from two things.

First, two cards from the same category can have drastically different difficulties. For example lets look at the Heavyweight category. One card will show only one scale which you can figure out almost immediately. Another card will show three scales and you need to use all three scales to determine which item is the heaviest. While the three scale question is not particularly difficult, it is going to take significantly longer than the one scale card.

Second, all of the types of questions are not created equally. Some of the question types you can breeze through in seconds. Other question types will take you almost your entire turn to finish one card. If you get cards from the first category you can earn a lot of chips in a turn. If you get a lot of the other cards though you will have a hard time getting more than two or three chips in a turn. Getting the quicker questions is one of the biggest advantages you can get in the Big Brain Academy Board Game.

These issues create big problems for the game because it adds a lot of luck to the game. A trivia game should mostly be based around your knowledge and not whether you draw the easy or hard cards. While none of the puzzles are super difficult, with Big Brain Academy being a timed game it matters quite a bit whether you draw the easy/quick cards or the hard/long cards. Since they are worth the same number of chips, a player who gets a lot of easy/quick questions is going to have a huge advantage in the game.

At first I really liked the scoring mechanic in the Big Brain Academy Board Game but as the game went on I began questioning it more and more. I really liked the idea of the scale determining the winner since it was something new that I really hadn’t seen used in other games. It is a clever way of handling the scoring since you can never be sure who is winning until the end of the game unless one team is destroying the other. I liked that some categories were more valuable due to being considered more difficult/time consuming. In some cases it works well since you can tell that some categories are faster than others. The problem with the scoring comes from the fact that I don’t think the game did a good job judging which categories were the most difficult/time consuming. Some of the lower value categories were some of the hardest/most time consuming while some of the most valuable were the easiest.

There were things that I liked and other things that could have been improved with regards to the components. While the scale could work a little better, I thought the component was pretty cool. I also liked that the cards were made so you can use the dry erase marker directly on the cards. I kind of wish the game had more questions though since with only 330 cards you could play through most of the cards pretty quickly. You won’t remember the answers to the cards but the game could have used a little more variety. Otherwise the rest of the components feel a little cheap.

Should You Buy Big Brain Academy Board Game?

The Big Brain Academy Board Game is an interesting trivia game that is almost ruined by a lack of forethought by the designers. While the puzzles can get a little repetitive, I liked most of the puzzle types. When you factor in the time element the cards can give your brain a workout. The problem is that the cards are so unbalanced. One card feels like it was made for small children while the next card feels like it was made for adults. Whichever player draws more of the easy cards has a distinct advantage in the game. When you combine in that the categories have different values that don’t always match up with their difficulty and there are serious problems with the game. I had fun with the Big Brain Academy Board Game but it has too much reliance on luck to be thought of as a serious trivia game.

If you would like to purchase the Big Brain Academy Board Game you can find it online: Amazon

Everything New Coming to Streaming Services in July 2020