While it has made many games over the years, International Games Inc will always be known as the company that made UNO. You really can’t blame people for thinking that way about the company either since International Games Inc had no problem printing “Made by the Creators of UNO” on basically every card game they made after UNO. I have played several of the card games made by International Games Inc in the past and one thing they share in common is that they are usually the very definition of an average card game. You can have fun with the games but you will never confuse them for being one of the best card games ever made. So with that in mind I was expecting Stun to be another solid but unspectacular game. After playing the game I have to say that even with those low expectations I was disappointed with Stun.

How to Play Stun

Take the two promotional cards out of the deck. Choose a player to shuffle the cards. After the cards are shuffled they are passed to the player on their left who will get to play first.

To begin a player’s turn they flip over the top card from the draw pile. If the card is not a “stun” card the player can either choose to keep flipping over cards or stop their turn. If a player decides to stop drawing cards, they set the card(s) they drew off to the side since they are now banked and can’t be lost on future turns. 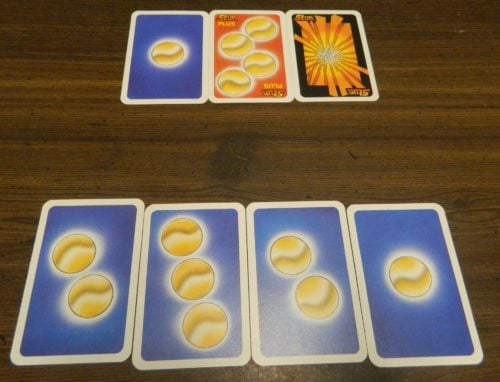 If the player keeps drawing cards and ends up drawing a stun card, the player loses all of the cards and chips they took on their current turn. All of the lost cards are placed into the discard pile.

The third card that this player drew was a stun card. This player would discard all three cards.

The goal in Stun is to acquire chips. When a player acquires fifteen or more points, they turn the cards in to take a chip from the bank. Each card that is flipped over that has circles on it is worth as many points as there are circles on the card. There are two unique cards though. 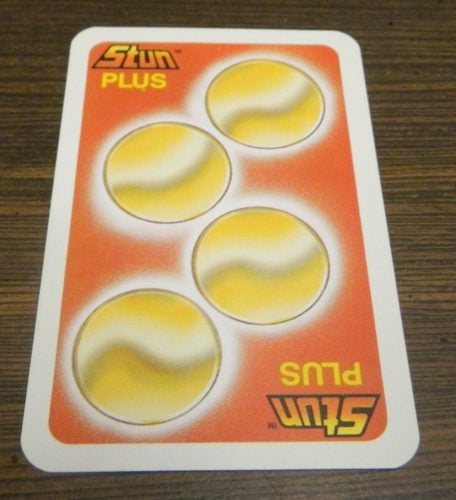 The stun plus card has two effects. First the card is worth four points towards the fifteen points needed to get a chip. Second if the player is not in first they can either choose to take a chip from the bank or from another player. 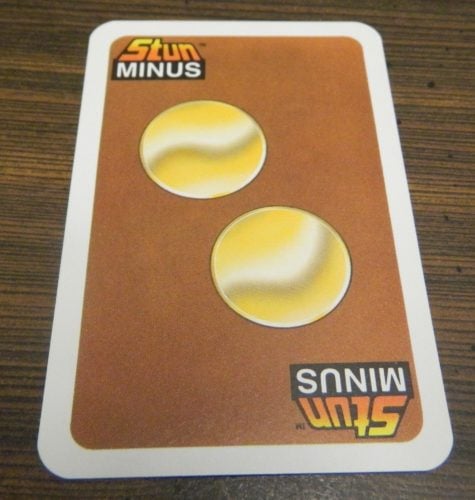 The stun minus card is worth negative two points. The current player can give the card to a player that currently has cards banked. If no one has any banked cards, the current player has to take the card themselves. This card can put a player’s total below zero points.

When the draw pile runs out of cards, all of the cards from the discard pile are shuffled and form the new draw pile.

My Thoughts on Stun

If I had to sum up Stun in just a couple words I would classify it as a very generic press your luck game. Basically the whole premise behind the game is deciding when to call it quits. You keep drawing cards until you either draw a stun card or stop drawing cards. The key is to figure out the best time to stop drawing cards because you don’t want to stop too early and leave points on the board but you don’t want to wait too long and lose everything. Choosing the right time to quit is the key to winning the game.

With there basically being only one mechanic in the game, it is not surprising that the game is really easy to play. The game takes minutes to learn and play. The game is simple enough that if you can count up to around twenty and understand the risk/reward mechanic you should have no problem with Stun. I can actually see Stun working as an introductory game to the press your luck genre for children. With the game being so simple it is also not surprising that it is quite quick to play. Unless the players take too many risks and lose everything, I don’t see a game taking more than 10-15 minutes.

The problem with Stun is that while the game’s basics work and it is quick and easy to play, it just isn’t that fun. There are so many press your luck games out there and I think most of them are better than Stun. The game has several problems which I will get to shortly but the biggest problem with the game may be that it does nothing new. If you have played a press your luck game before, you pretty much have already played Stun. I can’t think of a single unique mechanic in the game that makes it stand out from any other game from the genre.

It probably isn’t much of a surprise but luck is probably the biggest issue with Stun. To explain how much luck impacts the game I would like to start with a true story from the game that I played. The first card I drew in the game was a stun card. So after one turn I was unable to do anything. When my second and third turns came around the exact same thing happened. Three turns had passed and I was unable to do a single thing in the game. My luck eventually turned around a little but with this terrible start I had no realistic chance of winning the game.

This is just one example of how much Stun relies on luck. Outside of choosing how much risk you want to take in the game, you have no impact on how well you will do in the game. You could end up drawing a lot of Stun cards and have no chance of winning the game. Another player could draw a lot of point cards and easily win the game. These players didn’t win or lose the game based on their decisions but based on how the deck was stacked. While all press your luck games rely on luck, most of them have some way to mitigate some of the luck. Outside of being able to predict the future or cheating, the only thing you can do to mitigate your reliance on luck is to quit early but that will put you behind the other players.

The luck doesn’t just come down not drawing stun cards. At least in my opinion the Stun Plus cards are rigged. These are easily the best cards in the game since there is no downside to drawing one of these cards. First they give you the most points of any card in the game. The more rigged aspect is the ability to take a chip immediately if you are not in first. The card gives you an option to take a chip from another player or the bank but outside of being nice there is no reason not to take a chip from another player since you gain a chip and they lose a chip. This card is so important that I think the player who draws the most of these cards will most likely win the game. I don’t always mind catch up mechanics but in the case of Stun the catch up mechanic just adds even more luck into the game.

The contents are basically what you would expect out of a 1980s card game. You get cards and chips. The cards are designed to make each card easily recognizable. You will immediately know what every card does in the game when you draw it. The problem is that the card artwork is so bland/ugly. I really can’t think of many other card games that have such a bland art style. Stun’s artwork is definitely not one of the game’s strengths.

Should You Buy Stun?

While I think most of International Games Inc’s card games are pretty solid, Stun is just not a very good game in my opinion. While it is quick and easy to play, it is just so boring and has issues. There are much better press your luck games out there. Stun relies way too much on luck and the stun plus cards are just plain rigged making the game rely even more on luck. The card artwork is also dull/ugly.

If you would like to purchase Stun you can find it online: Amazon

I can remember playing this game many years ago. Where can I find this game, in stores, to play with my grandchildren?

Unfortunately you won't be able to find the game in a normal store as the game hasn't been in print since 1988. It is one of the games made by International Games that never sold that well. There are probably some games that are similar to Stun but I can't think of one off the top of my head.