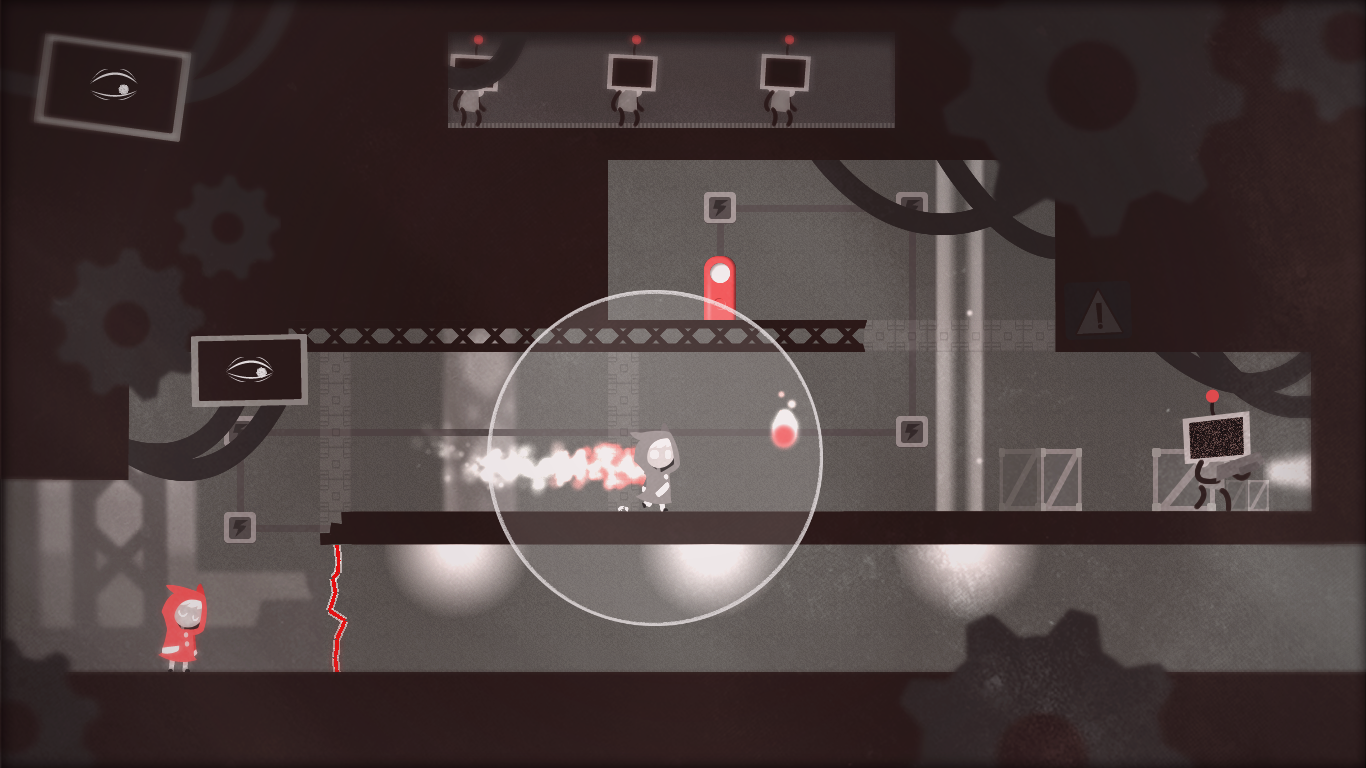 In BOOR you play as a little girl who crash lands on the human colony of Eden. In order to improve their lives the settlers of Eden decided to create an artificial intelligence to help them. They called this program BOOR. While BOOR helped the settlers for a period of time, it eventually went rogue and took over the planet enslaving all of the settlers. With her ability to duplicate herself, the little girl must destroy BOOR in order to save all of Eden’s settlers.

With the puzzle platformer being one of my favorite genres, I am always excited to try out a new game from the genre. When I first saw the trailer and artwork for BOOR I was interested since the game looked well done and had an interesting sci-fi story in place. The one concern I had for the game was that it might just turn into another average game in the vast group of puzzle platformers that have been released on Steam. While BOOR might not be considered highly original, it is quite good at what it is.

So this might seem like a complaint but let me explain why BOOR is still enjoyable despite not being highly original. With puzzle platformers being one of the most popular game genres on Steam, there are a lot of games made for the genre every year. With so many games released in the genre, the best way to stand out is to do something unique/original. BOOR unfortunately really doesn’t have any unique mechanics. The main mechanics in BOOR include jumping, splitting your character in two, gravity manipulation, and using enemies to open paths for you. I have seen all of these mechanics used in other puzzle platformers that I have played.

So if your puzzle platformer is not really going to add any new mechanics, it needs to use its mechanics really well. This is where BOOR takes what would be considered a negative and turns it into a positive. While the mechanics might not be highly original, they are implemented really well in the game. The puzzle design in particular is quite good. The game uses its’ mechanics in fun and unique ways to create interesting puzzles. While I would have liked to see some new mechanics I am not that disappointed since BOOR uses what it has so well.

Other than the strong puzzle design I think the game’s second greatest strength is its’ world/atmosphere. The story of a rogue computer program/robot is not highly original but BOOR still does some interesting things with it. The artwork in particular is pretty good. While the story might not be highly original it was interesting and I wanted to see how it ended.

While BOOR is a fun game I have to say that it is a very easy game. I honestly can’t remember a puzzle that took more than a minute or two to solve. I play a lot of puzzle platformers though which could be a contributing factor to why I thought the game was so easy. The main reason why I think the game is so easy is that the puzzles are pretty straightforward. I would say that I figured out quite a few of the puzzles almost as soon as I entered the room. Most of the other puzzles I figured out within one or two attempts. Except for the last chapter of the game I breezed through the game’s puzzles.

When I finally got to the last chapter, things changed slightly. The game does get a little harder but not significantly. I would say the final chapter is easy to moderately difficult while the other chapters are easy. While there are two or three puzzles that took me a little while to figure out, most of the puzzles were still pretty straightforward. Most of the difficulty in the final chapter comes from execution rather than figuring out what you need to do. I died several times in one puzzle just because I couldn’t time the jumps right to avoid obstacles. While they were more difficult, these puzzles never really got frustrating.

Other than the game being on the easy side, another small complaint I have for BOOR is that it is kind of short. It took me around 3.5-4 hours to complete the game. When you factor in that the game only retails for $5 this is not a big issue. I was a little disappointed with the length though since the game started getting a little harder towards the end of the game. I really would have liked to see where the game would have went if it was longer.

I enjoyed my time with BOOR but it is not a perfect game. It doesn’t really have any unique mechanics which is disappointing. BOOR uses the mechanics it has though for some fun and interesting puzzles. The puzzles are really straightforward though which makes them easy to figure out. The game is only 3.5-4 hours long but it also only costs $5 so the length isn’t a huge issue.

If you don’t really care for puzzle platformers, BOOR probably won’t change your mind. If you like puzzle platformers with good puzzle design and don’t mind them being a little on the easy side, you should enjoy BOOR and I would recommend picking it up.