Regular readers of this blog should already know that I am a huge fan of football. Being such a big fan of football and also enjoying board games I am always on the lookout for good football board games. I have encountered some good football games (Battleball, Jukem Football) but I have also played some terrible football games (Fast Football). When you look at football themed board games they mostly fall into one of two categories: action or simulation. Recently I looked at Vince Lombardi’s Game which is the definition of a simulation football game. While I enjoyed Vince Lombardi’s Game I was hoping for more from a simulation football game. I was hoping that today’s game Strat-O-Matic Pro Football would be that game as Strat-O-Matic is generally regarded as the best in simulation sports games. Strat-O-Matic Pro Football does a  great job of simulating football while also showing that simulation board games might not be the best for football.

How to Play Strat-O-Matic Pro Football

These rules assume players know the basics of how football is played. These rules also only outline the basic version of the game. Strat-O-Matic Pro Football also includes advanced and super advanced rules which will not be outlined here.

Each player chooses a team and takes all of the cards for that team. The player will choose their starters for the following positions: quarterback, tight end, flanker, split end, halfback, and fullback. The specialist and starting quarterback cards are put on the appropriate spaces on the gameboard. The other starter cards will be kept in the player’s hand. Each player also takes a play selector.

A coin is tossed and the winner determines who gets the ball at the beginning of each half. 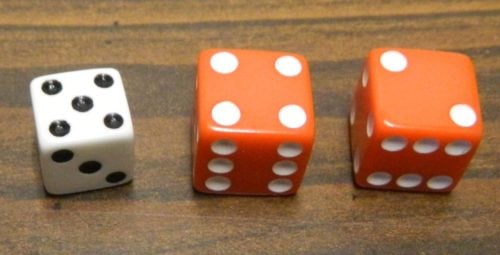 A five was rolled on the white dice. For this play the defensive player’s charts are referenced.

Both the offensive and defensive players have chosen a pass on this play. The players will use the “Right” column when looking up the outcome of the play. 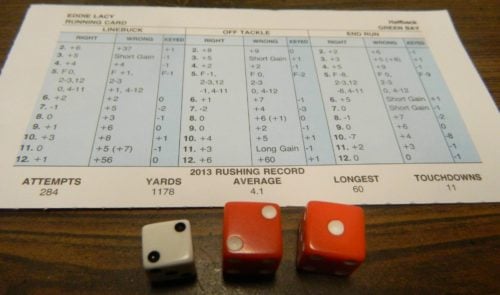 If the player chose a pass the player will use the corresponding chart on the quarterback’s card. If the chart says “Receiver” you consult the chart of the player that the ball was thrown to. 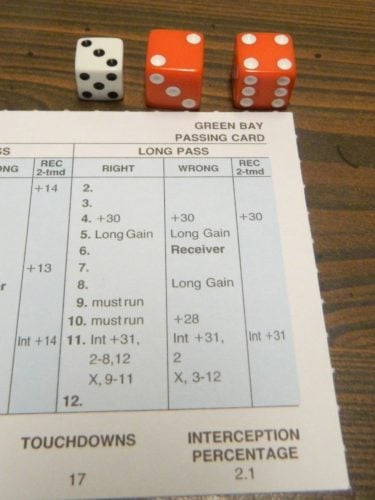 Once the outcome of the play is determined the ball is moved the appropriate number of yards.

Some other special circumstances you might find in the charts are as follows:

After the play is completed 30 seconds are marked off from the time left in the quarter. Another play is then run. In the basic game a player is not able to run with or pass to the same player on two consecutive plays.

If a player gains more yards on a play than there are left to the end zone, the player scores a touchdown. The player adds six points to their score and kicks an extra point.

For field goals and extra points you roll both dice and reference the corresponding chart. To make the field goal/extra point the number on the chart needs to be larger than the number found in the chart. If the kick was made the player adds three/one points to their score and kicks off to the other player. If the player misses a field goal, the other team gets the ball at the spot where the ball was kicked unless it was within the 20 yard line where the ball is placed at the 20 yard line.

For onside kicks you roll both dice and reference the corresponding chart. There is no chance to return onside kicks.

If at any point during the game a player rolls three of the same number, an injury has occurred. Find the spot on the injury chart that matches the three numbers that were rolled. Two of the dice are then rolled and the total is referenced. This will indicate which player was hurt. The dice are rolled again to determine the severity of the injury. The injured player is removed from the game and the player who controls that team has to choose one of their other players to fill in for the injured player.

My Thoughts on Strat-O-Matic Pro Football

While I like that Strat-O-Matic Pro Football streamlined things in some areas, I think it streamlined things a little too much. In the basic game of Strat-O-Matic Pro Football you have six choices for plays on offense and only two on defense. In the advanced game you can choose between ten different offensive plays and six defensive plays. Meanwhile in Vince Lombardi’s Game you have around 20 different plays that you can choose between. I really wish Strat-o-Matic Pro Football could have given you more options with regards to plays because one of the things I enjoyed most about Vince Lombardi’s Game is the amount of choices that it gave you with regards to plays.

I would highly recommend playing your first game of Strat-O-Matic Pro Football with the basic rules. You could start with the advanced games but the game will be a lot harder to follow as the advanced games have a lot of additional rules that add quite a bit of complexity. The basic game is mostly used to introduce you to playing the game. In the basic game you mostly call plays and roll the dice to determine the outcome of the plays. If you are playing the basic game I would consider Strat-O-Matic Pro Football to be on the lighter side as it gets right to the point. This version of the game should be able to be played by children and people that either don’t play a lot of board games or aren’t huge fans of football. While I like that the basic game is streamlined and easy to play, it does kind of suffer from being too simple. In the basic game the defensive player has little to do on a given play other than choosing between run or pass. While it acts as a good introduction to the game, it just feels like there is something missing from the basic game.

After looking at all of the different things that can be implemented in Strat-O-Matic Pro Football it is hard to deny how well the game does at simulating the game of football. While it doesn’t really simulate the action of an actual football game, it does an amazing job otherwise. Once you add all of the additional rules that the game can be played with, from a strategic point of view Strat-O-Matic Pro Football feels just like a normal game of football. The game has so many different options that you would almost need to be a football expert to truly appreciate all of the different options.

Along with being a good simulation of football, Strat-O-Matic Pro Football offers almost endless replayability if you enjoy the game. You can purchase the rosters of any team from almost any year. You can replay games from the most recent season or recreate classic games from the past. You could even play a game between a modern team and a team from the past. There is so much flexibility that a lot of people even play in leagues where each person takes a team and they simulate the entire season.

Despite all of these positive things I have to admit that I was still a little disappointed by Strat-O-Matic Pro Football. I had high expectations for the game as it is generally regarded as one of the best football board games. It is still a pretty good game but I just found it to be a little on the boring side. While it does a fantastic job simulating football, Strat-O-Matic Pro Football is missing the key component, the action. Simulating football with dice and charts just doesn’t do the sport justice in my opinion. At times the game just feels kind of slow and drags on for too long. After playing two of these simulation style football games I just don’t think they work as well for football as they do for sports such as baseball. I think a football board game needs to have a little more action which is why at this point I would say my favorite football board game is Battleball.

When talking about the components for Strat-O-Matic Pro Football you really can’t look at them like you would most board games. The visual style of the board game is extremely bland. The gameboard uses simple graphics is more focused on usability over visual appeal. The cards look no better since they are just cardboard cards with text and charts. Strat-O-Matic Pro Football is far from a good visual experience but that doesn’t matter much for this type of game. If the visuals really matter to you the game probably isn’t for you anyway. What the game really excels at though is giving you plenty of bang for your buck. If you get one of the games that includes all of the teams you get everything you need to simulate all 32 teams which could give you almost endless replayability. There really isn’t much more you could ask for from the game.

Should You Buy Strat-O-Matic Pro Football?

Strat-O-Matic Pro Football deserves a lot of credit for doing a good job recreating football. On a strategic level, Strat-O-Matic Pro Football feels just like a game of football. The basic game is simple and to the point where people shouldn’t have much trouble learning how to play. Then you can add in the advanced and super advanced rules which add significantly more realism to the game. These rules need to be added over time though as they could otherwise be overwhelming. If you are a true football fanatic though I doubt you could find a more authentic board game representation of the sport. While I enjoyed the game it is lacking the action of the sport which leads to it sometimes feeling a little long and dull.

If you are not a fan of football you will not enjoy Strat-O-Matic Pro Football especially since you need a good knowledge of the sport to fully appreciate the advanced portions of the game. Also if you like football but the idea of a game that mostly uses dice and charts doesn’t appeal to you, I don’t think it is the game for you. If you are looking for a good football simulation board game though I don’t think you could do much better than Strat-O-Matic Pro Football.

If you would like to purchase Strat-O-Matic Pro Football you can find it online: Amazon

Recently tried Strat o matic football. Did not like it at all. As you mention, it is too simple and too long with little for the defense to do. Also basic does not have penalties. And yes, appearances do matter to me at least somewhat. SOM just looks cheap and unattractive. Was not interested in the advanced version although I did incorporate the advanced penalty system and time clock. This did help. Much preferred APBA basic football. Looks better and has a better game feel to it, despite problems. Time clock system could be better, way too many player cards and the game took about 2 hours to play...and I kept no stats! Perhaps you are right...football may not be built for simulation board games. Just one guys opinion.