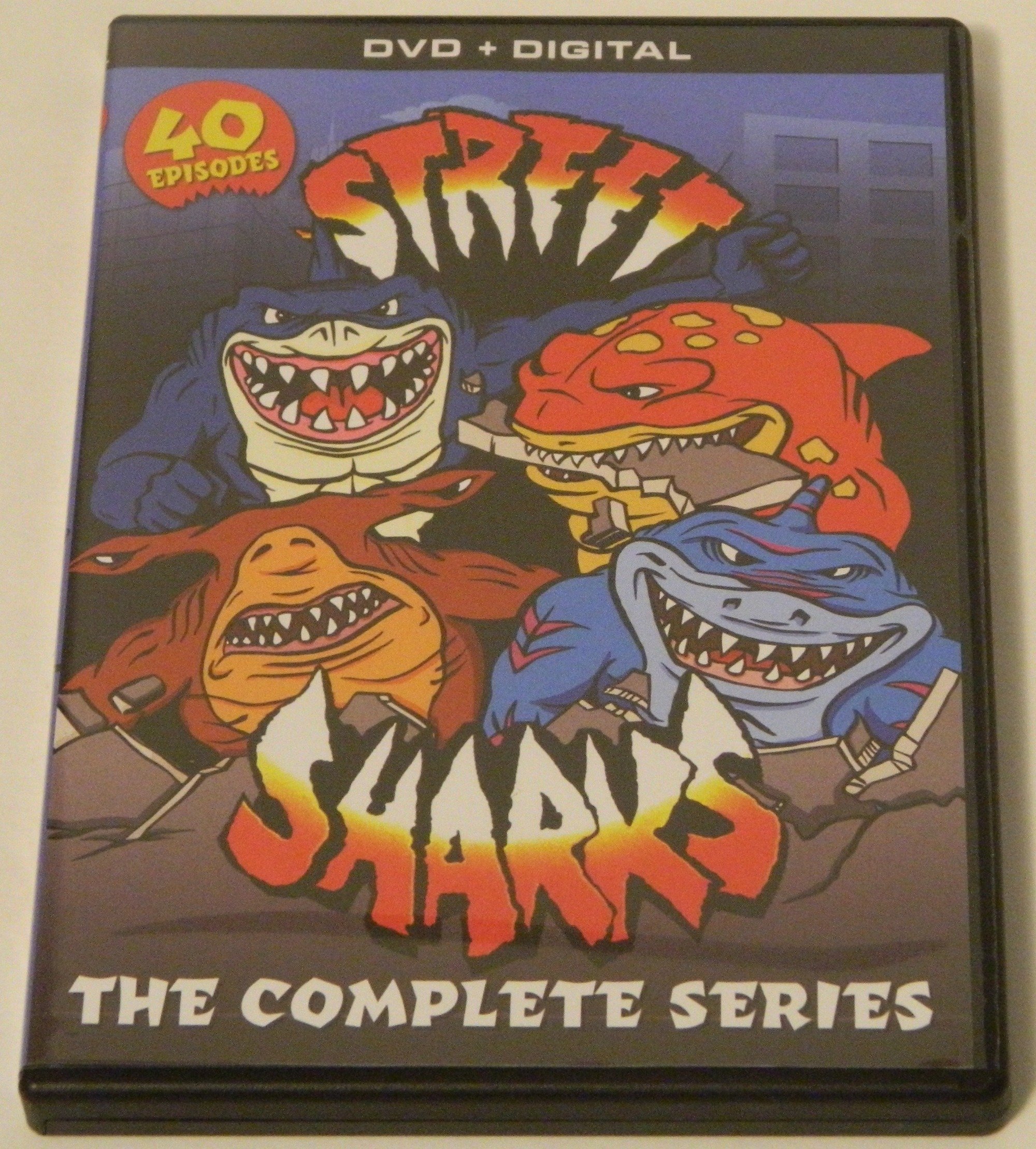 I was a huge Teenage Mutant Ninja Turtles fan when I was growing up. I had almost all of the action figures, video games, VHS tape releases, and even things like TMNT-branded sleeping bags. I watched the cartoon almost religiously. However, I will fully admit that Teenage Mutant Ninja Turtles was not a particularly great show. My nostalgia for it covers up a lot of the obvious flaws the series had. So why am I talking about TMNT when this review is for Street Sharks: The Complete Series? Well, first of all this series was obviously inspired by the Teenage Mutant Ninja Turtles craze of the late ’80s and early ’90s, to the point where I would almost consider it a ripoff. Also, I wanted to point out that since I was and still am a big fan of TMNT even though it is clearly far from a masterpiece, you won’t find me insulting things like Street Sharks or the people that love them. The show isn’t really for me (since I never watched it as a child) and I ultimately wasn’t very entertained by this DVD release but I know there are plenty of people who grew up watching the show. Nostalgia is a powerful drug and if you have it for Street Sharks, this release might very well be worth picking up. However, since most viewers aren’t going to enjoy the show, I am going to have to give it a mediocre score.

The premise of Street Sharks involves university professor Dr. Paradigm (J. Michael Lee) experimenting with gene manipulation. He turns his colleague Dr. Bolton into a monster then tricks and captures Bolton’s four sons. He injects DNA from different types of sharks into each of the four sons and they transform into half-human, half-shark hybrids. Throughout the series, Dr. Paradigm makes more creatures to terrorize Fission City who the Street Sharks need to stop and/or rehabilitate. Street Sharks aired from 1994-1997 starting with a three-episode mini-series before it became a full series (which ultimately ran for 40 episodes). Eventually the show would become Dino Vengers Featuring Street Sharks for the last few episodes (the Dino Vengers would later get their own series called Extreme Dinosaurs).

As I wrote earlier, this review is coming from a person who never watched a single episode of Street Sharks as a kid so if you have nostalgia for the series, take my critiques with a grain of salt. For those who have nostalgia for the show, I would certainly recommend giving the show a try as an adult. There’s a pretty good chance you might wonder why in the world you liked the show in the first place but you will probably also get a nice hit of nostalgia. The price is certainly right, Street Sharks: The Complete Series has a $19.98 MSRP and can be found for about $10 on Amazon at the time of publication.

However, for people who have never seen an episode of Street Sharks, I don’t think I would recommend it except for maybe big-time ’90s animation junkies looking for something new to watch. It isn’t unwatchable but it is way too similar to Teenage Mutant Ninja Turtles and has a few too many problems for me to recommend it to most audiences. The biggest problem with the show is that it isn’t very funny. Kids might get some laughs out of the series but any adults who didn’t grow up with the show are going to be in for a painful assortment of puns, bad catchphrases like “Jawesome!,” and other lame jokes.

The other major problem with Street Sharks: The Complete Series is that you can tell the animation was very cheaply made. Characters often are frozen in place to save a few frames of animation and the animation just flat out looks very poor. Also, the video quality on this release is pretty bad, probably due to compressing as many episodes onto as few of discs as possible to keep the price point down. Despite the series having 40 episodes, this is a three-disc set (meaning each disc has 13-14 episodes per disc). Due to the compression, Street Sharks: The Complete Series sometimes almost looks like VHS quality at times. However, as this was a cheaply made animated show from the mid-’90s, I doubt the series ever looked good in the first place. Street Sharks: The Complete Series does come with a digital copy version you can watch on Mill Creek’s website which may or may not help with some of the compression problems. Mill Creek first released this series on DVD in early 2013, I’m pretty sure that other than the digital copy this release is identical to that release.

Even though I spent the last two paragraphs attacking the negatives of Street Sharks: The Complete Series there were still a few things I liked about it, even though I never watched it as a kid. First of all, the action is quite good and certainly comparable to shows like Teenage Mutant Ninja Turtles. The comedy element of Street Sharks is terrible but the action is pretty good even if a lot of it is the four main characters eating through stuff to make improvised weapons, add support beams to help prevent disasters, and stuff like that. It’s repetitive and a bit cheesy at times, but I actually liked the action part of Street Sharks. Also, it is pretty cool that Fission City is almost somewhat of a dystopia, even though the show doesn’t use that setting to its advantage as much as I hoped. Some of the voice acting in Street Sharks is also quite good.

Ultimately, your decision on whether or not to purchase Street Sharks: The Complete Series pretty much comes down to one thing. Did you watch the show as a child and are you nostalgic for it? If you are, I would recommend buying it even if the video quality is quite terrible. There’s a pretty good chance you will find it cheesy and wonder why you liked it in the first place, but there is also a chance that you might rediscover a nostalgic gem from your childhood. If you never watched the show as a child, I would only recommend it for diehard ’90s animation fans looking for something new to watch.