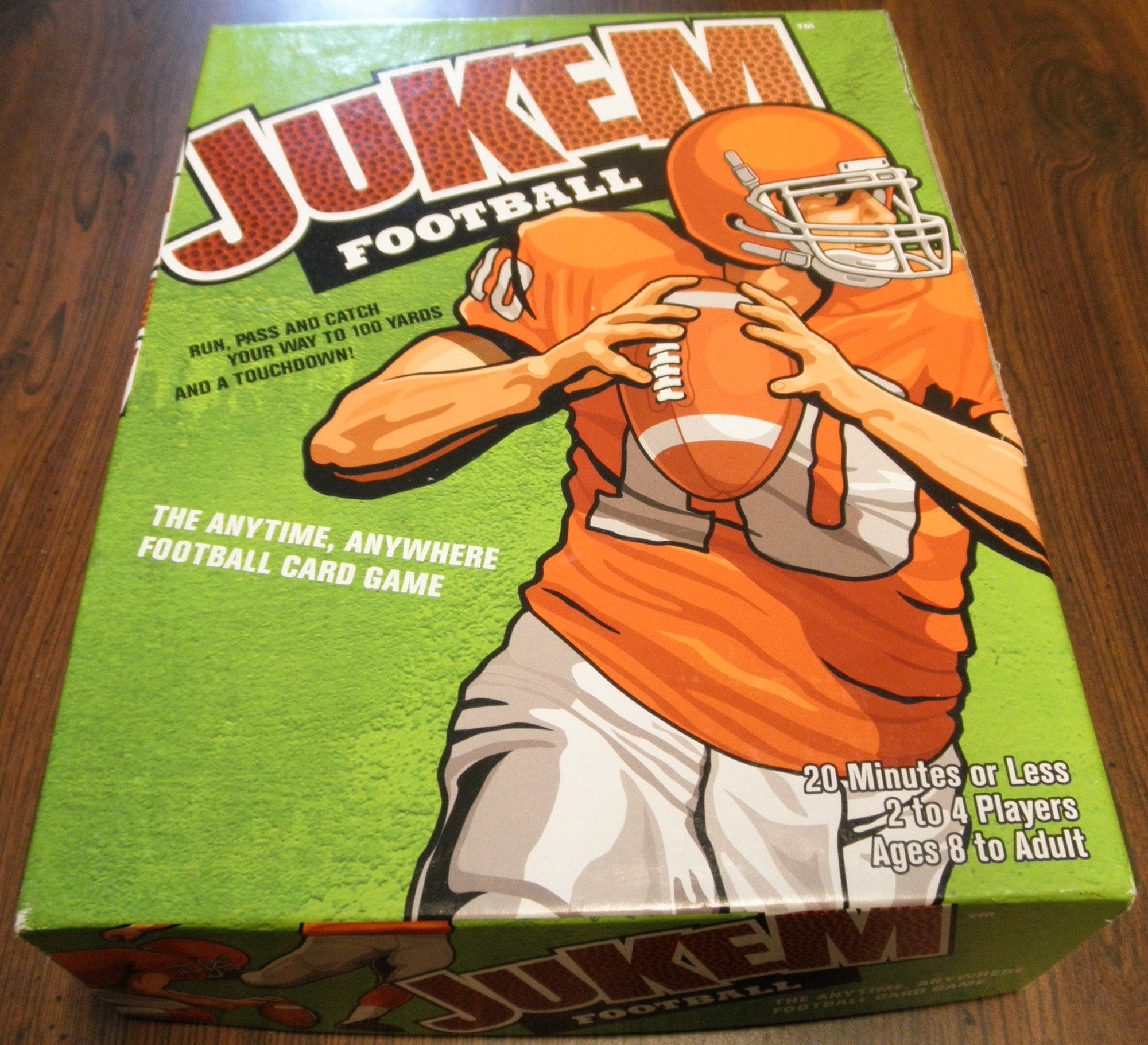 Before beginning the game you need to decide which deck or decks of cards to use. For games with small children it is recommended that you play with the rookie deck. Otherwise you should play with the Jukem deck. If you want a longer game or are playing with three or four players you should use both decks together.

Each player gets four cards to start the game. The top card is then turned face up to begin the discard pile.

Each player’s turn begins with the player drawing cards to reach a total of five cards. The first card they draw can be from either the top card of the discard or draw pile. On a player’s turn they try to score points by either kicking a field goal or scoring a touchdown. In order to score a touchdown, a player needs to create a drive totaling exactly 100 yards (you can’t go over 100 yards). In order to kick a field goal, a player needs to accumulate at least 70 yards and then needs to play a field goal card.

After a player plays a card or a series of cards, they are able to draw more cards in order to get back to a total of five cards. A player can continue to play cards as long as they can or until they score. If the player scores, the corresponding points are added to their total and they begin a new drive (start at zero yards) on their next turn. If the player is unable or doesn’t want to play any more cards, their turn ends. They need to discard one card, and they continue their drive on their next turn. If a player does not think they will ever be able to score with their current drive, they can at any time during their turn punt the ball which allows them to start a new drive on their next turn.

Some other cards included in the game are as follows:

Jukem Football is far from a perfect game (I will get to that later), but it was actually quite a bit of fun to play. It’s hard to explain why the game is fun to play, but I enjoyed playing it. For a card game it actually does a solid job imitating a game of football. Playing cards to build drives, does a good job simulating the offensive side of football. The game doesn’t do a good of job simulating defense (more on that later). It’s definitely not a perfect imitation of football but I don’t think a board/card game could ever do a great job imitating football.

One of Jukem Football’s greatest strengths is that it is an easy game to learn and play. If you know the basics of football and are able to count up to 100 in increments of five and ten, you will be able to play Jukem Football. While the recommended age is eight, based on their counting skills I think kids younger than eight could even to play the game. Do to the game being so easy to pick up and play, Jukem Football can be enjoyed by people who rarely play card games.

Overall the quality of components is solid. The cards are of typical card stock and should hold up pretty well. The artwork is kind of bland though. I like how the yardage amounts stand out well which makes it easy to count out the length of each drive. Unfortunately there is little variety in the artwork. Other than different yardage totals, every pass, run, and catch card look exactly the same. The artwork is not distracting though so it really doesn’t hurt the gameplay experience. I think there could have been more variety in the artwork though.

While Jukem Football is a pretty good game, it does have some pretty significant problems which keep it from being a great game. Most of the problems with the game come from the quantity of cards and the hand limit.

I played the game with four players and used both deck of cards. Unless you are playing with small children, I would highly recommend using both decks of cards. While playing the game, it felt like the draw deck expired quickly even with using both decks. Each turn through the draw deck felt more like a quarter than a half of a football game to me. I feel the game should have come with more cards. In its’ current state, you can expect to have two to four drives in a half. Due to the lack of drives in a half, scores tend to be lower than you would expect. The top scorer in the game I played had 28 points and they scored a touchdown on every drive they had. In the future I think I will try going through the draw deck four times in a game and that might fix the problem.

The lack of cards leads to the biggest problem with the game, the hand size. The small hand size of only five cards stifles the passing game, makes the small amount of defense cards even more pointless, adds needless luck to the game, and eliminates a lot of the potential strategy in the game. Instead of five cards I think the hand size should have been at least seven or eight and possibly even up to ten. I am guessing that the game creator chose a small hand size to make the game easier to play but I think that was a mistake. With a larger hand size the game could have eliminated some of the luck factor, and made the game a little more strategic allowing players’ to hold cards for a more strategic play in the future.

I think Jukem Football could have been a pretty strategic game. If the hand size was larger, players could strategically hold cards hoping that in the future the card they needed would come up. You are essentially unable to do that in Jukem Football though since you need to keep refreshing your hand as quickly as possible if you want any chance of scoring. For example in the game I played, I got the largest reception card in the game. It would have been nice to keep but I ended up discarding it since I couldn’t waste a spot in my hand on a card that would either never come up or it would take too many turns to get.

If you are looking for an authentic NFL experience playing Jukem Football, you will be disappointed. As I have already alluded to, the passing game is far from as prevalent in Jukem Football as it is in the NFL. You win Jukem Football with run plays not passing like in the NFL. While you don’t get as many yards from run cards, they are much more valuable than pass or catch cards. You can immediately play every run card you draw and gain yardage. Most progress in drives will be made through the running game. If you don’t get a lot of running cards, you will not win the game.

As I have already mentioned, defense is next to absent from Jukem Football. Of the 112 cards in both decks combined there are only five turnover/penalty/blitz cards. With the lack of defense, the game essentially turns into a game of each player building their own drives and finding out at the end of the game who did the best job building drives. If there were more defense cards, the game could have had more back and forth since players would be able to attack other player’s drives.

Defense is hurt even more by the small hand size. If you are lucky enough to get a defense card, you can’t afford to hold it for long. Each spot in your hand is precious and if you want to even have a chance at passing the ball, you need to essentially use your whole hand to hold pass/catch cards so you can have cards to match in future turns. Therefore defense cards become afterthoughts that need to be played as soon as possible. The defense cards could have had an effect on a game if played at the perfect time but you will essentially end up playing them as soon as possible in order to get them out of your hand.

Another side effect of the small hand size, is that it creates a lot of stalling. At times in the game you will end up skipping several turns in a row due to having a hand of cards where none of the cards work well with one another. Since you can only discard one card each turn, you are unable to quickly change out your hand. So you spend several turns in a row discarding one card and ending your turn. I think the game should have given you the opportunity to discard your entire hand whenever you chose to punt the football.

Jukem Football is a good but not great football game. It has a good foundation for a football card game and it is fun. Unfortunately a lack of cards and a small hand size leads to a lot of problems with the game. With some tweaks I think Jukem Football could be a very good game.

People who are not football fans should probably pass on Jukem Football. It is just not good enough to appeal to someone who doesn’t have any interest in football. If you are able to overlook the issues with the game though, Jukem Football is a pretty good football card game.