To be the first player to acquire the specified number of points.

At the beginning of a player’s turn they can choose whether to roll one or both dice. Players must move the full roll of the dice unless they stop in a port to pick up or deliver spice. While moving players can only move along lined routes and they cannot pass through the same space twice on the same turn.

On each spice card and on the game board is a list of which cities a particular spice may be picked up in. Players can only pick up spices that are currently in the spice directory. In order to pick up a spice you need to land in one of the cities where the spice is located and end your turn there. All pick up spaces are indicated by a red dot. You do not have to reach the city by exact count but if you pick up a spice your turn will end and you will not be able to use the rest of your roll. 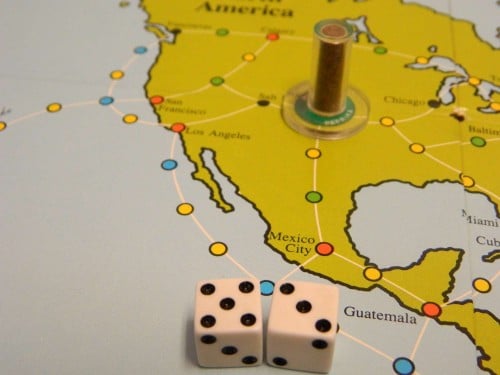 If you want to pick up a spice you place one of your tokens on the spice that you collected. You may only collect one of that spice during your turn but you could use your next turn to pick up an additional of that spice. Since you only have two tokens you may only ever carry two spices at one time. If at any time you want to dump one of your spices you can without any penalty. Any number of players can have the same spice at the same time. 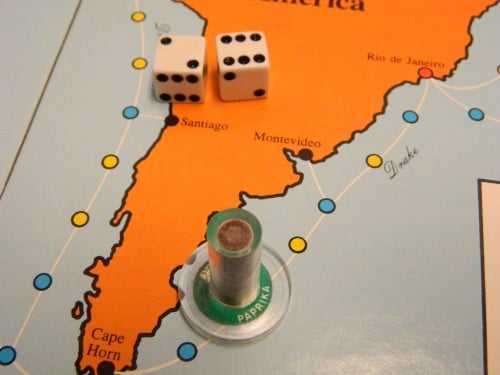 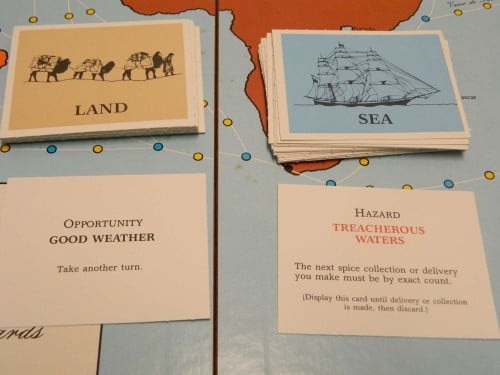 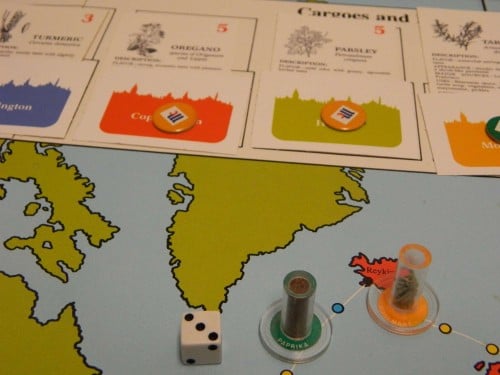 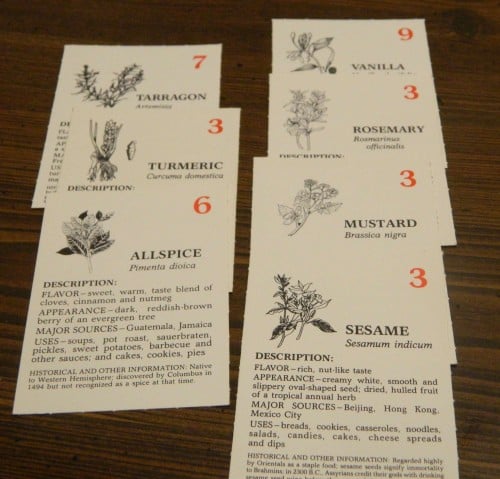 In a four player game a player needs to get at least 32 points to win the game. This player has earned 34 points so they would win the game.

When you think of war games one of the first board game companies that comes to mind is Avalon Hill. Avalon Hill was a board game company from the 1950’s to the 1990’s (now owned by Hasbro) that for the most part made military strategy games and other strategy/simulation board games. Through those forty years the company released over 300 different board games some good while others were bad.

During the late 1980’s Avalon Hill started to get into financial problems which might explain why Spices of the World got made. Spices of the World is a unique game because it was a promotional tie-in between the McCormick Spice Company and Avalon Hill. I would really like to know how this game ever came into existence. I am guessing that Avalon Hill needed the money but I have no idea why McCormick Spice decided to choose a board game company that was mostly known for making war games to make a game about spice trading. While as a product tie-in the game could have been a lot worse, Spices of the World is still a pretty bland roll and move game.

While Spices of the World was a blatant sell out by Avalon Hill, I have to give the designer some credit for actually trying to make a game. While the game mostly plays like a traditional roll and move game, you can tell that Avalon Hill actually tried to do some new things with the genre.The game has some strategy as you try to pick out which spices to go after and plan out your route on how you are going to pick them up and deliver them.

The game mostly works as a delivery game. You pick up items and try to deliver them to their final destination. As a whole the game works fine. The game doesn’t have any broken rules and you can have some fun with the game. Spices of the World is a serviceable roll and move game that is actually better than a decent amount of roll and move games that I have played. Spices of the World has two main problems though that keep it from being anything more than a very average game.

Let’s start with the length. The game generally takes around 1-1.5 hours. That is way too long for a simple roll and move game. This makes the game really start to drag at the midway point. Spices of the World would be much better at 30-45 minutes. If you play with the included rules there is no way the game can be completed that quickly. The good news is since the game lasts until someone has reached a certain number of points, you can adjust the number of points needed in order to shorten the game.

The bigger problem with Spices of the World is luck. Like most roll and move games, Spices of the World relies a lot on luck. Since you pick which spices to pick up and deliver, some of the luck from a traditional roll and move is eliminated since you can somewhat work around poor rolls. If you roll poorly though you are still going to struggle to win since no strategy can fully overcome poor rolling.

Unfortunately Spices of the World adds a lot of its’ own luck. This is due to the spice directory. Since the spices and destination cards are randomly drawn, how the pairs are set up can have a big impact on the game. Since the spices are worth different point values, some spices are going to be much more valuable to deliver than others. This mechanic works well when the higher point spices require traveling a longer distance but since the destination cards are randomized that is not always the case. You could end up only having to move a high valued spice a couple spaces in order to collect a high value spice card.

The spice directory is really important for players looking for new spices. Once a player has delivered a spice, a players success will depend on how close they are to collecting their next spice. The players who do best in the game are usually lucky and have new spices pop up near their current location. In a four player game only one or at max two players can really go for each spice. It doesn’t take that long to deliver spices so whoever gets lucky and has a new spice pop up near them is likely to be the first person that can deliver it. Whoever gets luckiest in this regard will likely win the game.

The game’s components are one of the most interesting parts of the game. The player markers have to be some of the strangest that I have ever seen. Since the goal of the game is to travel the world you would think that the pieces would be little ships, people or pretty much anything else other than a tower of spices that the game chose to use. I have to say that I have never played as sesame, dill weed, mustard, pepper, rosemary, or paprika before. Other than the strangeness and the fact that the pieces are too big for the spaces on the board, the play pieces are not that bad.

The rest of the components are disappointing though. The game board is not terrible but is pretty bland. The text for the different cities is pretty small but I liked that the game color coordinated pick up and drop off locations. The game board could have done a better job making the cities easier to find on the map though since you could have a lot of trouble if you don’t really know geography. The cards are made of some pretty thin cardboard. Each spice card does include a unique recipe which could be nice for cooks who like to try new recipes.

For a product tie-in, Spices of the World was better than I was expecting. The game has a decent amount of strategy for a typical roll and move game. The designer put some work into designing the game. I have played many worse roll and move games. Unfortunately the game takes too long and relies too much on luck to be anything more than an average game.

In some cases I might actually have recommended Spices of the World if it wasn’t for the cost. Currently on Amazon the game is over $100 and on EBAY the game usually is sold for at least $50. The game is really not worth that much unless you are an Avalon Hill, McCormick Spice, or advertising collector.

Walt Disney Company Documentaries: The Complete List and Guide to What to Watch
Click here to cancel reply.