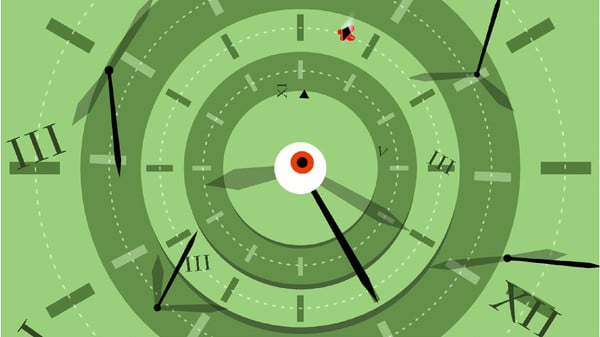 in Zero Reflex you are trapped in a psychedelic world populated by an evil eye that is out to destroy you. You must survive various challenges where you need to avoid missiles, bullets, spikes, saws and many other obstacles. The game has 60 different challenges spread among three difficulty levels. You need to survive for 30 seconds or you will be sent back to previous challenges that you will have to complete to get back to the challenge that you failed. The further you progress in the game the more the game punishes you for failure. In the easiest difficulty you can make two mistakes and survive. The second difficulty allows you to make one mistake. I am guessing that you can make no mistakes in the hardest difficulty.

While I wish the game was a little more unique, Zero Reflex is great at what it is.

At this time I have played the game for around an hour and a half. I am currently stuck on a couple of the challenges in the second difficulty level which keep sending me back which is preventing me from making more progress in the game. While I am getting a little frustrated having to play the same levels over and over again, I have had fun with the game. I wouldn’t consider myself to be a huge fan of the quick reaction style of games but I don’t hate it either.

If you get frustrated by playing the same levels over and over again, Zero Reflex may drive you nuts. I actually found the easiest difficulty to actually be kind of easy since I breezed through all of the levels. The difficulty ramps up quite a bit in the second difficulty level though. I haven’t beat the second difficulty yet due to a couple of the challenges being really hard for me. Most of the levels are not that hard but when you encounter one challenge that you just can’t seem to beat, you keep getting sent back which gets frustrating. Unless you are really good at the genre you will have to repeat the same levels over and over again to the point where you will almost memorize the challenges before the challenge you are really struggling with. I am guessing the hardest difficulty is even worse and I probably won’t ever beat it since while I like the game, I don’t like it enough to put myself through the frustration that it would take to finish the game.

Other than the possibility for frustration, the only other real problem with the game is that while very well designed it is not groundbreaking or highly original. If you don’t like these quick reaction type games, I don’t think Zero Reflex will change your mind. If you like the genre though this shouldn’t bother you since you will probably really enjoy Zero Reflex.

The amount of time you get out of Zero Reflex will probably come down to how good you are at quick reflex games and how frustrated you get after repeatedly failing the same challenges over and over again. If you are really good at the game you could potentially get through the game pretty quickly since the game has only 60 different challenges. I have a feeling that the later levels are really difficult though so even players that are great with these quick reflex games could take a lot more time than you would expect.

I actually think the length is a bigger concern for the players who aren’t good at the genre and get frustrated easily. The easiest difficulty is pretty easy and most players should be able to get through it without a ton of issues. The difficulty ramps up quite a bit in the second difficulty level. The game is not impossible but some of the challenges could take players a lot of time to complete and might require players to retry the same levels over and over again in order to defeat certain sections. If you get frustrated you might end up quitting the game a lot sooner than you would expect. If the third difficulty ramps up as much as I am expecting I think it will be almost impossible for some players to be able to complete the game.

I kind of worry that Zero Reflex might not have a ton of replay value after you have beat the game or gone as far in the game as you could possibly go. At this point all you can do is just keep repeating the same challenges over and over again. Some players might enjoy this but I bet a lot of people might get sick of the game at this point.

Should You Purchase Zero Reflex?

Zero Reflex is good at what it is. If you like quick reflex action games where you need to be quick in order to avoid obstacles, you should have a lot of fun with the game. The game controls well and the challenges are interesting and well designed. The game is not unique enough though to persuade someone who doesn’t like the genre to start liking it though.

If you don’t like these type of games or are not very good at them I would probably recommend that you not purchase Zero Reflex. If you like the genre though at $3 you can’t go wrong since you should have quite a bit of fun with the game.