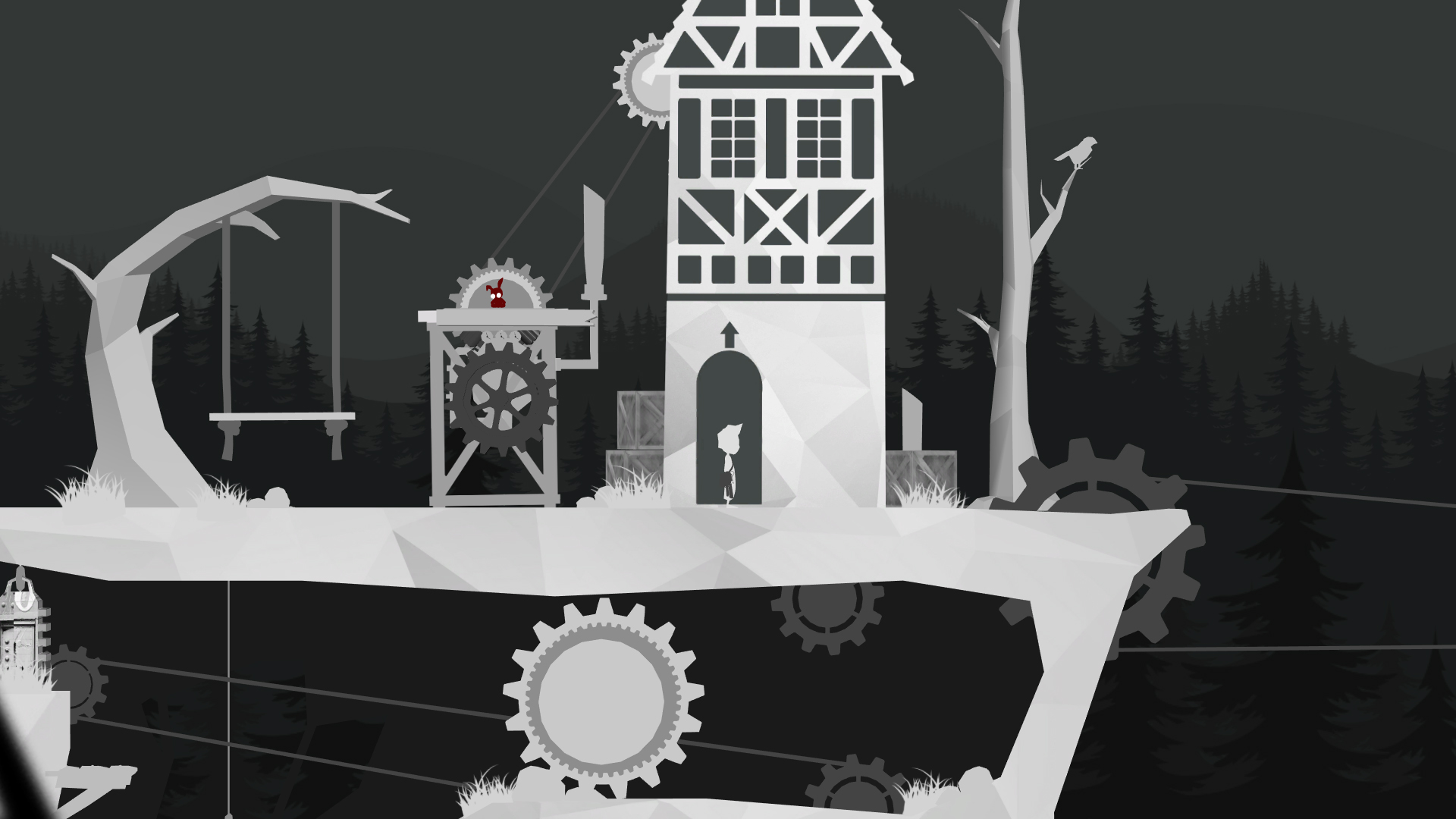 You begin the game playing as Albert. Albert’s sister has been kidnapped by a mysterious force and he must go on a journey to save her. Joining him on his journey is Otto, his sister’s stuffed animal. Otto has some special abilities though which Albert can use to try and help him on his journey. Albert must fight creatures and solve puzzles that stand in his way.

Albert and Otto is a puzzle platformer. A majority of the game involves jumping over gaps and avoiding obstacles. The game also requires you to solve puzzles in order to make progress and defeat enemies that you encounter. Albert controls like most puzzle platformer protagonists but also carries a gun with him that is used to fight enemies and solve puzzles. Otto also gives Albert a couple special abilities. Otto gives Albert the ability to lift and move objects with his mind as well as discharge electricity which powers up the machines that he encounters.

The puzzle design is where Albert and Otto really stands out. The game only has a few different mechanics but the game does such a good job utilizing them in order to make some interesting puzzles. While I wish the game had more mechanics, the game does a good job mixing up how you use them so it doesn’t feel like you are doing the same things over and over again. The game does a good job slowly introducing the new mechanics and then finding unique ways to blend the different mechanics together. This is showcased by the puzzles at the end of the game which are especially good. The final sequence in the game is the best in the entire game. None of the puzzles will probably stump you since most of the solutions are pretty obvious, but they are still interesting.

As a whole I would say that Albert and Otto is easy to moderately difficult. I didn’t really have much trouble with the game since I breezed through most of it. There were a couple areas where I died a couple times (mostly at the end of the game) but the game never became frustrating. I play a lot of puzzle platformers though so your experience with the game may differ. Even if you aren’t great at puzzle platformers you shouldn’t encounter any situations where you feel like you have no chance to finish the game.  If you like really hard platformers you might be disappointed with Albert and Otto but most people will find the game to be just the right level of difficulty.

Other than the puzzle design, the graphics are another thing that stands out in Albert and Otto. The graphics have a similar design to Limbo but instead of everything being black, most things in Albert and Otto are white. The game’s world has a dark undertone to it though so it’s not like the game is all cheerful and happy (it’s not that dark either though). While I wish the game would have done more with the story, I thought the game did a good job creating an interesting atmosphere.

The single biggest problem with Albert and Otto – The Adventure Begins is the length. If it wasn’t for the short length I would have considered Albert and Otto to be one of the best puzzle platformers that I have played in a while. The game is really short since I beat the whole game in just over three hours. I didn’t collect all of the collectibles which would have added some additional time but the game would still be pretty short. While the game is good I don’t really know if it is something that I would replay either.

The problem with Albert and Otto is that the game ends so abruptly. This is due to the game being just the first episode of a much longer game. Due to being just one episode in a much longer story (four episodes in total), the game suddenly ends on a cliffhanger. It is too bad since the “boss fight” just before the game ends is probably the best part of the entire game. I was really getting into the game and then it just ended.

This abrupt ending actually shows another issue I had with Albert and Otto, the story. One thing that kind of disappointed me about the game was that the story barely even makes an appearance. The story only really comes into play at the beginning and end of the game. While the game kind of tells a story though the atmosphere, I was wishing for a little more from the story. What makes the abrupt ending so disappointing is that the story actually starts to pick up in the cutscene that ends the first chapter.

Should You Purchase Albert and Otto – The Adventure Begins?

While the game is not perfect, Albert and Otto is a very good puzzle platformer. The game’s theme/graphics and especially the puzzle designs are what makes Albert and Otto really stand out. While the game doesn’t have a lot of mechanics, the game does a fantastic job mixing and matching them in order to make some really interesting puzzles. If the game wasn’t so short and ended so abruptly I would have said it was one of the best puzzle platformers that I have played in a while.

If you don’t like puzzle platformers you probably won’t like Albert and Otto. If you like puzzle platformers though I think you should really enjoy the game. At only $5 the game is pretty affordable. If you don’t like short games you might want to wait for a sale but I would recommend picking up the game at some point. I know that I am looking forward to see what happens in the next episode of the series.

Albert and Otto – The Adventure Begins