To begin the game assemble the gameboard. Randomly select six palm reading, punch board, dog house, snake charmer, guess weight?, auction block and balloono cards. All of the hold everything cards are used. All of the cards are placed in their corresponding spaces on the gameboard. Each player takes a playing piece.

During each players turn they spin the spinner and perform an action based on what space they land on.

Shenaniganzas Spaces: The player receives the number of Shenanigans that are printed on the space.

Palm Reading: Read the next palm reading card and perform the action written on the back. 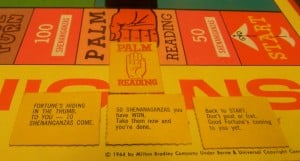 Lose Turn: The player loses their next turn.

Punch Board: The player reads the next punch board card and performs the action on the back. 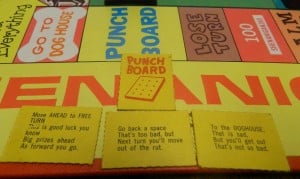 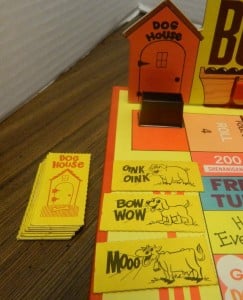 In the following scenario the first player would need to guess a pig, the second player a dog, and the third player a cow.

Hold Everything: The player takes one card at a time and flips it over. The player can either continue flipping over cards or they can stop at any time. The player receives money equal to the values printed on the cards. If the player draws the “While you were picking this up you dropped your last toy” card the player’s turn is over and they need to discard the last toy card they drew. They then get money equal to the value of the rest of their cards. 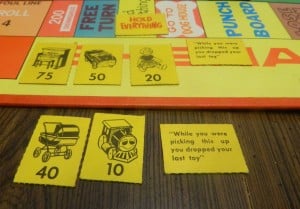 In the first scenario the player would get the first two toys for $125 and would lose the last toy due to the “dropping toy” card. The second player would only get $40.

Free Turn: If you land on a free turn space you get to spin the spinner again. 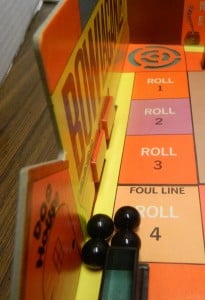 The player rolls the marbles from behind the foul line between the 4 and 3 spaces.

Snake Charmer: The player takes the top card and flips it over. The player receives the amount of money printed on the card. 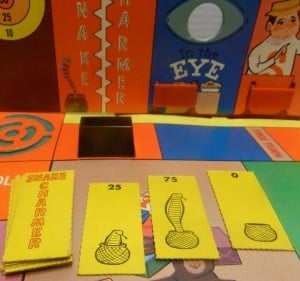 In the following scenario the first player would get $25, the second player $75, and the last player $0. 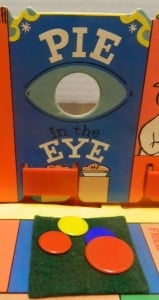 Auctioneer: The top card is put up for auction without any of the players looking at the other side. Players need to bid in increments of 10. Whoever wins the auction pays the amount they bid and they receive from the bank the amount listed on the back of the card. 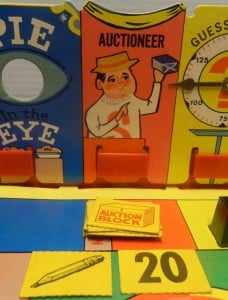 Guess Weight?: The player needs to guess the weight on the next card by moving the pointer to a spot between two of the black numbers. The card is then flipped over. If the player guessed correctly they get $50. If they guess incorrectly they get nothing. 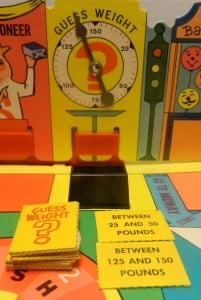 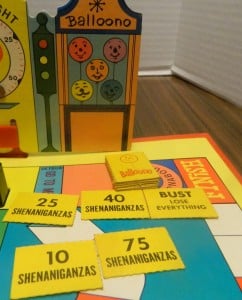 Turnabout: When a player lands on this space they spin the spinner again and they go back that many spaces.

Whoever has the most money at the end of the game wins.

Back in 1964, ABC aired a television show called Shenanigans. The show aired for two seasons on Saturday mornings. On the show child contestants would essentially play a life-size version of a board game. They would move along the board collecting “shenanigans” which could be cashed in for prizes at the end of the game. As a companion for the television show, Milton Bradley made a board game based on the television show.

As a child I vaguely remember playing this game (many years after the show went off the air). I didn’t remember any specific details about the game but I remember having some fun playing the game. After finding the game at a thrift store I decided to give the game a try. The game has some merits but it suffers from being way too simplistic.

My thoughts on the individual games are as follows:

As you can see most of the games are entirely luck based. All but Bowlaganza and Pie in the Eye rely heavily on luck. Shenanigans as a whole does not have a lot of skill to it. Whichever player is luckiest is going to win the game. You usually will earn more money on the luck based games than on the skill based games. The most money you can earnon a turn (unless you are really lucky in Hold Everything or Balloono) is just by landing on the $200 Shenanigans space. If you land on this space you are almost guaranteed to win since the winner of the game I played barely had $200 total. Also whoever gets to the finish line first is likely to win the game since no one is likely to have built up a big enough lead to overcome the $50 bonus for finishing first.

Due to its’ age and its’ target audience of children you can’t be too harsh on the game though. Children’s games from the 1960’s were for the most part luck based as well. I actually think the Shenanigans game could have been quite a bit better than most children’s games of its’ era if there were more interactive games. If all of the games were like Pie in the Eye and Bowlganza, Shenanigans could have been a fun game full of little mini games.

One thing I was disappointed with was the length of the game. The game claims that it lasts 20 minutes but the game I played was closer to 10-15 minutes. With its’ rules the game seems to end as soon as it gets started. The problem with the length is that you don’t even get to play all of the games. I would say on average each player in the game I played ended up only playing at most half of the games. Between all of the players I think all of the games were played but most were only played once. The game should have found a way to make it more likely for each player to play most of the games.  I think the game should have made players keep going around the board until they accumulated a certain amount of Shenanigans.

While the game is pretty simplistic for adults, I think kids could enjoy the game. The game has a recommended age of 5-12. I think kids on the lower end of that spectrum will have the most fun with the game. If you are an adult and have no fond memories playing the game as a child, I don’t see any reason why you should bother with Shenanigans. People who have nostalgia for the game though might get some enjoyment out of the game.

Overall the components are decent. Due to its’ age you are unlikely to find a copy in great condition. The cards are made of cardboard so they are likely to have some creases. The copy of the game I found had a warped board which did affect the Bowlganza game. The gameboard is pretty colorful and reminiscent of a cheesy 1960’s game show. Otherwise the components are what you would expect from a 1960’s board game.

Overall Shenanigans is not a terrible game but for adults it is too simplistic. Only two of the mini games involve any real skill and the winner of the game will always come down to which player is luckiest. If you fondly remember playing the game as a child you may get more out of the game. I think younger children will enjoy the game quite a bit more than adults and my overall rating of the game reflects this.

At the time of this review, Shenanigans is a pretty rare and expensive game. Due to its’ cost I would probably only consider purchasing the game if you have a lot of nostalgia for the game. Otherwise I would recommend passing since there are a lot better games that are a lot cheaper.

I just found one piece of my old Shenanigans board game and had to find out what it was all about. I kind of remember the tv show which is strange because at that age I should be able to remember anything. I do remember playing the game and liking it. I was thinking maybe to try and recreate the board game since I can see all the graphics. Maybe I could add a few more games and rules. Why can't MB reproduce some of these old tried and true games for a new audience and for those looking for nostalgic games.

Occasionally Milton Bradley (now published under the name of Hasbro after being acquired by it) does re-release some of the older games from their past. It doesn't happen all that often though. I am guessing it is mostly due to them not thinking these older board games will sell very well. In the case of Shenanigans I am guessing that is part of the reason as the show last aired in the 1960s and most people have probably never heard of it before. I personally never even knew the show existed and was only familiar with the board game which my Aunt owned when I was a kid. Only later did I learn that it was based on a show. Another reason Shenanigans will probably never be reprinted is due to licensing reasons as at this point it might be hard to track down who owns the rights to Shenanigans.

As for reproducing some older Milton Bradley games I totally agree with you. As a fan of rummage sales and thrift stores I have acquired a lot of older Milton Bradley games over the years. While a lot of them aren't very good, you occasionally find that hidden gem that was lost to time for some reason. Either the game didn't sell well or people didn't think the game would sell well today which has prevented them from being reprinted.

I love this i got it in 1964 and Stubby Kaye on tv was awesome i loved the gameboard .as a kid then or tv film historian today i love these game show board games of a great era in tv simple clean fun wish i had the game today no fun getting old.Shenighoul sadly isnt inthe game at home tho

Hi Mort its Tom Kessel tv film historian collector on old Hollywood since 1958 Im on FB IMDB and YT I want to thank you, This is a great Website its a great one I have my own Hollywood museum here 7000 films 1600 movie tv books magazines 27,000 songs, posters n stills Yes as a kid I grew up with tv game shows I love so many WHATS MY LINE I just bought. I hope to showcase if we followers here are allowed to post or if not I love to see a review of Whats My Line on this page. I love these games I had as a kid Im collecting them still in my retirement, Shenanigans 1964-65 tho short lived was a gam I cherished They just dont make gameshows or board games like these anymore, Heartfelt thanks to you and all. TomK

Thank you so much for this detailed review with all the photographs. As I do have fond memories of this game, both on TV and as a board game, I plan to purchase it down the line. I doubt I'll ever play it, but I will enjoy looking at it when I'm old (eh, older).