Funglish is a 2009 Hasbro/Parker Brothers party game with a unique take on games where you try to get the other players to guess words (like Pictionary and Charades). Instead of drawing or acting out the word, you are allowed to describe the word with other words. However, you can’t just use any word that you want, you have to use some of the 120 descriptive tiles the game comes with. Some sample tiles include “colorful,” “red,” “dead,” “soft,” “yummy,” “metal,” “evil,” “square,” “fictional,” “numerous,” “Asian,” “high tech,” “wet,” and “furry.” Basically if it is a frequently used adjective or adverb, it’s probably amongst the 120 tiles.

Funglish begins with set up. You will need a relatively large table to lay out all of the tiles and you should organize them based on their category (tiles describing colors are all black, size tiles are yellow, positive traits are green, etc.). Since there are so many different tiles everybody should spend a couple minutes getting familiar with all the different options. The clues can be given by either partners (if you play with partners you aren’t teammates, all players are still competing against each other individually to guess other players’ words) or a solo clue-giver. The game suggests starting with partners but I think the game is easy enough to go with just a single clue-giver. If you decide to play with partner clue-givers, decide on who will partner with each other. Finally, shuffle the deck of cards and decide how many rounds you want to play (a four player round will take about 15 minutes and add three or four minutes for each additional player).

When the game begins, decide which player or partners will be the first clue-givers. This player (or tandem) sits or stands by a small easel the game includes (see the picture below). This easel allows you to place tiles in one of three different sections (“definitely,” “kind of,” and “not”). You will obviously want to put tiles that perfectly describe the word in the “definitely” section and ones that kind of match in the “kind of” section. For the “not” section, a good strategy is if the players’ guesses are way off (for example, they are only naming animals and people and your word isn’t either), you might want to put something in the “not” section to get them back on track (for example put “living” in the “not” section so they stop guessing animals and people). For an example, if you are told to describe Abraham Lincoln some good tiles to use would be American, tall, dead, and good (or evil for the “not” section if people are guessing only corrupt or otherwise awful politicians instead of the few good ones). 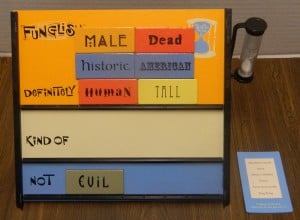 An example of the words you could use to describe Abraham Lincoln in Funglish.

The first player or team draws the top card from the deck (all cards have a list of six different words, people, or places) and someone flips over the three-minute sand timer to start the round. The describer(s) decide which word to describe first and start finding and playing tiles (as many as they want) on the easel. The rest of the players begin guessing, using the words on the easel as a guide. As soon as someone guesses the correct word, the describer(s) should say “that’s it!” and move on to the next easiest word on the list. The describer(s) can continue describing words on the card until time runs out or the guessers have guessed all six words on the card. Whenever either of those two things happens, the turn is over. 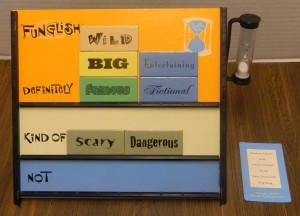 Someone correctly guessed Abraham Lincoln so the describer moves on to the next easiest item on the card, King Kong. These are some sample tiles that could describe King Kong.

When a turn ends, the describer(s) get a point for each word someone guessed correctly. If all six words on the card were correctly guessed (this only happened once in our game), the describer(s) get a bonus point (so they get a total of seven points for their turn). Each correct guess also grants a point to whoever guessed it. After the turn has been scored, the next describer(s) take their turn and the game continues until the agreed upon number of rounds have been played. The winner of Funglish is not surprisingly the person who scored the most points (note that if you are playing with clue-giving partners, players still score points for correct guesses individually so the winner’s partner probably won’t share the win).

The rules and restrictions for giving clues are pretty obvious. The clue givers are only allowed to play tiles and make certain small gestures (for example, if someone is very close to the correct answer you can make a gesture to have them continue on that line of thinking). They can’t talk, make noises, or make any charades-like signals. They can nod or shake their head as long as they aren’t directly answering a guesser’s question. The guessers can ask the clue givers questions in an attempt to prompt them to play certain tiles. For example, they can ask “what color is it?” and while the clue giver can’t directly answer the question, it should get them to play a color tile to help the guessers out.

The clue givers don’t have to do the words on the list in order, they can pick and choose which words they think will be the easiest to describe (and then go back to the harder ones afterwards). If they attempt a word and the guessers are way off track, they can decide to move on to a new word by taking the tiles off the easel and announcing that they are moving on to a new word. They can go back to this word later on in their turn if they wish. If someone breaks the rules, the rule sheet actually says that the person complaining should “lighten up” since it’s a game that’s meant to be fun. However, if they are flagrantly breaking the rules the punishment and severity is up to the other players.

I was pleasantly surprised if not downright shocked by how much I enjoyed playing Funglish. If you’ve read a lot of my board game reviews here on Geeky Hobbies, you’ve probably seen a lot of highly negative reviews for mainstream Milton-Bradley, Parker Brothers, and Hasbro titles. It’s usually for a good reason because they have a tendency to stink (especially older games from the ’90s or earlier, recent mainstream games are getting better). Funglish isn’t the most original game out there (it’s basically Pictionary using words instead of drawings) but it was surprisingly fun to play and worth a spot in my game library.

Before playing Funglish, I thought it would be almost impossible to describe words using a restrictive set of 120 adjectives and adverbs. However, it is much easier to describe things than you would think. The game includes pretty much all of the tiles I would have used, there are only a few useful words I wish the game would have included. You can also use words together to increase the tiles’ versatility a bit (putting “African” and “American” together should tip off most people that the person is African-American).

Some of the cards are easier than others but overall they are pretty balanced. Most cards will have at least one tricky word that is almost impossible to describe or really hard to get people to think of (which is good since it makes the game more challenging). People, places, and animals tend to be the easiest to describe (words like “puppy” can usually be guessed with one or two tiles like “furry” and “living”) while some of the more specific words (like Rolls-Royce) can be tougher. Rolls-Royce is tough because most people tend to think of general things (if you play the “fast” and “moving” tiles people will tend to guess things like “train,” “car,” or “airplane” instead of a specific type of car). However, there is usually one or two of these tough words on every card, making them pretty well balanced overall.

Rounds of Funglish are very fast-paced and energetic. While the turns are three-minutes long (quite long for a game like this), everybody gets to play at all times (it can really stink waiting for your turn to come in certain games) and you have to be thinking and brainstorming the entire time. It can be kind of hard on the describer(s) trying to search through all of the tiles to find the right ones to play but they are given three minutes, which is plenty of time. It is very rare to get the guessers to guess all six words on a card though.

Overall, Funglish is very fun to play and one of the biggest surprises I’ve played in quite some time. However, there are a few small problems with the game. First of all, the biggest issue is that there are only 50 cards (a total of 300 words) included. If you get addicted to the game (like we did), you might play through half of them in a single session. At most you will get four or five games out of the 50 cards and even worse, you can’t repeat the cards because players will almost certainly remember some of the words on them. It should be easy enough to find a list of words, people, and places on the internet to make some new cards but this still goes down as a negative for Funglish. Hasbro should have included at least 200-300 cards, it wouldn’t have been that hard to come up with more words.

Another (in this case minor) problem is that the game requires a lot of table space to lay out all of the tiles so that the describer(s) can easily see them. Also, you will either have to move around the table so the describer(s) have the best view of the tiles or you will have to flip the tiles each turn so they don’t have to read them upside down. Again, this isn’t a huge deal, it’s just a minor inconvenience.

I thought Funglish had a chance to be an average word describing game that would be a good substitute for Pictionary (since I am a terrible artist, as are the people I play games with), which isn’t bad for a game I picked up for a dollar at a thrift store. I didn’t expect the game to be as good as it is though. While the small amount of cards is a bit disappointing, the game is easily fun enough for a spot in my game library and definitely deserving of a recommendation (as long as you like party games like Pictionary).