To begin the game assemble the easel and shuffle the cards. In each round, one player will be the clue giver (rotates each round) while the other players are the guessers. The clue giver takes one of the cards and the round begins.

On each card there is the answer word (the word the other players have to guess) and five clue words. Once the round has begun players can begin guessing and guess as many times as they want. The clue giver needs to pay attention to the words guessed in order to keep track if anyone guesses the correct word. If someone guesses the correct word the round ends immediately. 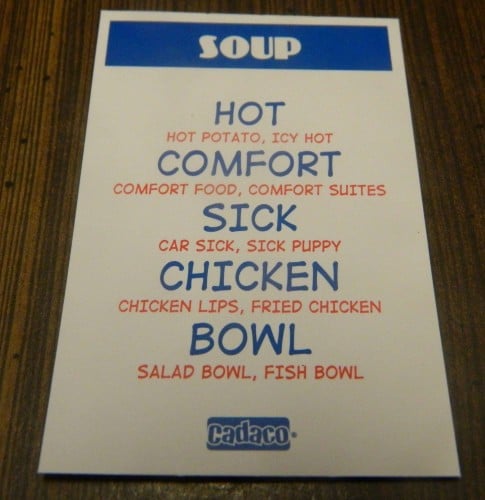 In this round the answer word is “soup” and the clue words are “hot”, “comfort”, “sick”, “chicken” and “bowl”. Below each clue word are two default choices the clue giver can use.

The clue giver needs to write one of the clue words (in any order) onto one of the clue panels along with another word that relates to it. The two words together must make a word or phrase that makes sense instead of just being two random words. For example if the clue word is “big” the player can write any of the following on the panel: Big Ben, Big Bird, Mr Big, and so on. If the player can’t think of something to write, every clue word has two examples underneath that the player can use. Once they have written the two words on the panel the player drops it into the easel. The clue giver then moves onto one of the other clue words. This process is continued until either someone has guessed the right answer word or if the clue giver has made a panel for all five clues. Once the player has finished all five panels, they flip over the sand timer. Once the sand timer is finished the round ends. 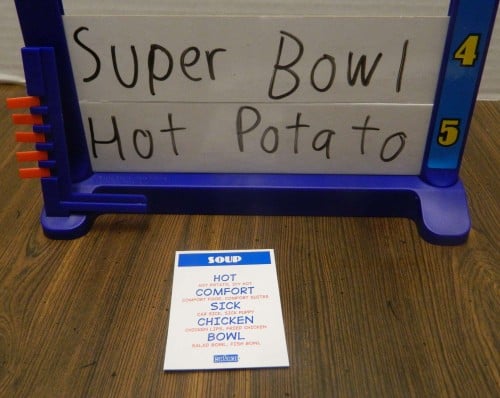 When the round ends, points are scored based on when a player was able to successfully guess the answer word.

The first player to 30 points wins the game.

We at Geeky Hobbies have looked at quite a few word games in the past. I wouldn’t consider myself a huge fan of word games but I definitely don’t hate them either. I enjoy playing well crafted word games. There are so many word games on the market though that you end up running into a lot of games that are dull copies of one another. In general word game genre is not particularly original.

Recently at a thrift store I ran into the game Through the Clues. I generally don’t even give these type of games a second thought but since it was only a $1 I decided to take a look at it. The game looked kind of cheap but it also looked interesting. It looked like a mix of the word and deception genres. Basically players need to guess a word based on clues given. The twist is that half of the words provided are given by the clue giver in order to try and deceive the other players.

This mix of genres is actually Through the Clues’ best feature. The mechanic is unique and is fun at first. The deception aspect is the one truly unique part of the game. One of the most enjoyable parts of the game is when as a clue giver you try to plant an idea into the other players to take their guessing into an entirely different area than the actual answer. It can be quite entertaining for the clue giver when the other players think they are closing in on the correct word when they are actually going in the opposite direction.

Through the Clues is in the easy to moderately difficult level. The game itself is not hard to play and should only take a couple minutes to explain to another player. The difficulty comes in trying to come up with the clues. It takes some time to fully understand how to make the two word clues and at times it is really hard to come up with any. I give the game a lot of credit since they foresaw this issue and included two default answers for every clue in case you are stumped and can’t think of anything to write.

While the game does have 150 cards (300 total words), I feel the game is going to lack replay value. I think once you play through the cards you are not going to want to play through them again. You obviously aren’t going to remember all of the cards but you will probably remember some of them. In most games like this you could end up making your own cards. While you could make your own cards, it will be much harder in Through the Clues since you need to come up with five clue words that work with the game’s other mechanics.

The biggest problem with Through the Clues is the wide range in difficulty of the words presented. Some words are way too easy (can be guessed with one clue) while others are too hard so players stand almost no chance at being able to guess in time. At least with the cards we played with it seems like 80% fall into the later category. The clue giver has such a distinct advantage since the words on the cards are hard to guess and the clue giver can do a lot of things to make guessing even harder.

The simplest way the clue giver can make it harder for the other players is to write the clues quickly. The faster the clues are written, the less time the guessers have. If you just use the suggestions on the card you can probably reduce a round to less than two minutes. Players that tried this strategy were very successful since it is hard to guess the correct answer so quickly. While I don’t like that this makes the game harder, I actually kind of liked this mechanic. This mechanic gives the clue giver some flexibility on how they would like to play the game. The player can go really quick which will likely give the players better clues but less time. The player could also take their time and create more deceptive clues but that will give the players more time to make guesses.

The best way for the clue giver to make the game harder for the other players to guess is to make deceiving clues. As a clue giver your best strategy is to develop the clues so they lead down two distinct paths. This way the players can’t start to form a strong correlation between the words since the words form two different paths. For example in one round I had the word “Motorcycle”. When giving clues I tried to derail the other players by giving them words that lead towards gambling and other sports. The other players then had to waste their time on two different paths which took long enough for the timer to run out.

The final advantage the clue giver has is to leave the best clue for last. By leaving it for last the other players have less time with it. For example I had the word “stamp” and one of the clues were “lick”. With the other clue words, this clue would have given away the answer word. I left this clue for last. Even though the other players ended up correctly guessing the answer word, I was able to minimize the amount of points they earned.

The game also requires too much from the clue giver. The clue giver has to listen if the right answer is given while trying to write new clues. This is pretty hard to do. It requires quite a bit of concentration just to come up with good clues. In the game I played the clue giver missed  hearing the correct answer a couple times. Due to points being scored based on the round that the correct answer is guessed this causes problems when players don’t remember when they provided the correct answer. I honestly think the only way to correct this problem is to have one player sit out each round. This player would know the answer word and would be responsible for listening to the guesses made and stopping the round when someone guesses correctly.

My final complaint is with the components. The components just felt cheap. The copy I bought was semi-new, the box was opened but the components were still sealed. The biggest problem is with the marker. After just one game it felt like it was already drying out and was becoming pretty hard to use. If you purchase the game you are going to need to buy additional washable markers. The marker boards also don’t erase off as well as you would expect so after continued used they are going to show a lot of remainder marks. The easel is okay but it could have done a better job making it easier to slide the panels in since when you are hurrying you could easily miss the easel and have the panel slide out. The components don’t ruin the game but they don’t help.

Through The Clues is an interesting game. I give the developers props for coming up with an interesting twist to the word game genre. At first the game was actually pretty fun since it was a unique experience. Unfortunately the game’s many issues kind of derailed the experience. Too many of the words are too hard giving the clue giver a distinct advantage. The components are also quite cheap.